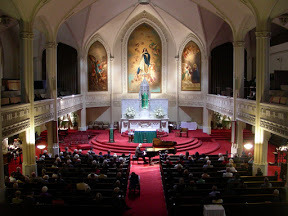 Inside Old St. Mary's, photograph by Kevin B. McGlynn

Ariela loved music. She took just about every music appreciation class City College offered -- Jazz, Latin, American Folk, Traditional African, Black Tradition in American Dance, Classical and Opera. From years of listening to books on tape, she had developed an incredible auditory memory. After hearing a piece once, she could identify title, composer, and genre. Class assignments often included attending and critiquing live concerts. That's when she searched and found Noontime Concerts. Every Tuesday at 12:30pm, live chamber music permeates the nave of Old St. Mary's Cathedral. Ariela went every Tuesday for years.

Old St. Mary's is a San Francisco landmark. Built in 1853, destroyed by earthquake and fire in 1906, restored and rededicated in 1909. If you're walking up Grant and focused on Chinatown, you might miss the old brick façade. If you're on the California Street cable car line, you might whiz right by it. You might not notice the four long cement steps that mark the entrance. In other places steps would be a deterrent for someone who used a wheelchair, but Noontime Concerts welcomed Ariela. She entered by way of a rickety lift, hidden in a side entrance on Grant. Sometimes, the lift needed coaxing through stops and starts, but Ariela was patient. Once she got to the main level, she was escorted down the center aisle. She liked to sit close to the front.

She sat further back when she came with me. I could never completely stop worrying about her. What if she felt sick and had to leave during the concert? Her friends were more relaxed. I suppose that's one of the reasons she preferred to go with them.

When she died, about a year ago, we wanted to do something for Noontime Concerts for bringing so much joy to her life and to the lives of everyone who appreciates classical music.

When Ariela's friend Hallie Pridham, a talented cellist, heard about the concert dedicated to Ariela, she wanted to perform. Hallie would bring her group Liaisons. They would play Early Music, pieces Hallie knew Ariela would have appreciated. Hallie would play the viola de gamba, Susie Fong, the harpsichord, and Melinda Becker, mezzo soprano. Hallie would wear her satin pumps, the ones with big rosettes at the toes. She knew Ariela would have appreciated the fashion statement.

The night before the concert, Susie got severely ill. It was too late to find and rehearse another piece for the two remaining musicians. In the early morning, the day of the concert, Hallie decided to play Bach Solo Cello Suites. Noontime Concerts would go on with one artist instead of three. I don't know what Ariela would have enjoyed more -- the Bach Suites or the last minute drama.

Minutes before the concert, producer Kevin McGlynn called Melinda. Couldn't she sing something a cappella? At 12:25, Melinda appeared. She opened the concert with a Sephardic folk song about love and loss and life. Themes Ariela knew and lived. She would have loved the mournful Ladino melody and the suites that followed. And, she would have laughed to see Hallie in her stilettos, cello strapped to her back, maneuvering down the steep slope of California Street.