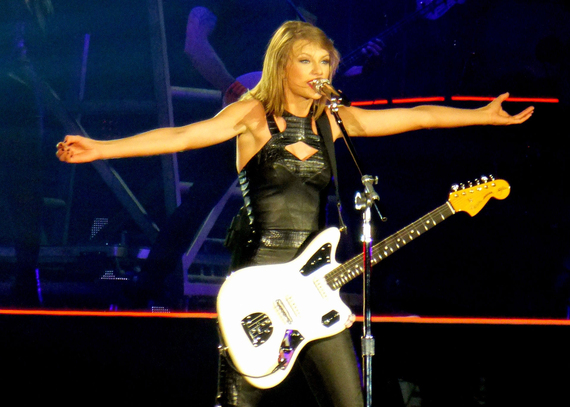 Even if you don't pay attention to whatever elements of Taylor Swift's life make the media on a given day, one would be hard-pressed to have missed the weekend's brouhaha with Swift vs. Apple Music. Say what you will about the girl -- her fluffy songs, her digitally-enhanced vocals, or her madcap rise to fame -- she knows how to use a bully pulpit.

In a nutshell: after Apple Music announced their new streaming service on June 8th to much excitement and fanfare, it quickly became clear that the three-month trial period offered as enticement to joining artists came with some decidedly unappreciated fine print. It seems any music sold during those three months would not earn royalties for the artists, writers, and producers who signed up and whose music was being sold. Which meant those free three months, marketed as a "join-up gift," were really a gift to Apple, allowing them to rake in whatever revenues were earned from those "trial" artists, bereft of any payout to the artists themselves. Cold. Calculating. Greedy. And Ms. Swift would have none of it.

She not only withdrew her own latest (and wildly successful) album, 1989, from the steaming service, she took to her Tumblr page on June 21st with an open letter to Apple. I'm going to put the whole thing here because I think her points (the most salient of which I've highlighted) are so important:

I write this to explain why I'll be holding back my album, 1989, from the new streaming service, Apple Music. I feel this deserves an explanation because Apple has been and will continue to be one of my best partners in selling music and creating ways for me to connect with my fans. I respect the company and the truly ingenious minds that have created a legacy based on innovation and pushing the right boundaries.

I'm sure you are aware that Apple Music will be offering a free 3 month trial to anyone who signs up for the service. I'm not sure you know that Apple Music will not be paying writers, producers, or artists for those three months. I find it to be shocking, disappointing, and completely unlike this historically progressive and generous company.

This is not about me. Thankfully I am on my fifth album and can support myself, my band, crew, and entire management team by playing live shows. This is about the new artist or band that has just released their first single and will not be paid for its success. This is about the young songwriter who just got his or her first cut and thought that the royalties from that would get them out of debt. This is about the producer who works tirelessly to innovate and create, just like the innovators and creators at Apple are pioneering in their field...but will not get paid for a quarter of a year's worth of plays on his or her songs.

These are not the complaints of a spoiled, petulant child. These are the echoed sentiments of every artist, writer and producer in my social circles who are afraid to speak up publicly because we admire and respect Apple so much. We simply do not respect this particular call.

I realize that Apple is working towards a goal of paid streaming. I think that is beautiful progress. We know how astronomically successful Apple has been and we know that this incredible company has the money to pay artists, writers and producers for the 3 month trial period... even if it is free for the fans trying it out.

Three months is a long time to go unpaid, and it is unfair to ask anyone to work for nothing. I say this with love, reverence, and admiration for everything else Apple has done. I hope that soon I can join them in the progression towards a streaming model that seems fair to those who create this music. I think this could be the platform that gets it right.

But I say to Apple with all due respect, it's not too late to change this policy and change the minds of those in the music industry who will be deeply and gravely affected by this. We don't ask you for free iPhones. Please don't ask us to provide you with our music for no compensation.

All I could say was, "Brava, Ms. Swift!" Especially after it was announced, just hours after Swift's note, that Apple Music not only heard her, they were, indeed, changing their policy. From The Huffington Post:

The power of protest. The power of standing up to behemoths of the industry to make clear that policies rooted in unfairness and lack of respect for the talent, hard work, and expended resources of artists, will not, and should not, stand. Kudos to Apple for getting the point and making the needed changes. Win/win all around.

But what about writers? What about the novelists, non-fiction writers; essayists and article writers; in fact, any writer who's creating work being posted, sold, or used by anyone else (i.e., book sale sites, news sites, resource sites, company websites, etc.)? This group of artists does not, at least not that I'm aware of, have a champion akin to Taylor Swift putting their own work on the line to protest for fairer industry practices. Instead, I see piece after piece cajoling writers to give their work away for free as "enticement" to new readers. I see content wranglers justifying non-payment in lieu of "online real estate" (really, who needs more "online real estate"?). I see sites like Amazon parsing subscription formulas to pay royalties based on how many pages of a book are actually read, as opposed to the purchase of the book itself (tell me, when were we ever allowed to pay for just the amount of a meal we ate at a restaurant?). All of these tactics, and others, are designed to benefit the purveyors of that content and the readers of that content, with little consideration for the creators of that content. Which is wrong. And pretty much the exact argument Swift was making to Apple.

In fact, she made a similar point last year regarding Spotify, another music streaming service, reiterating her view of the "value of art" in an interview at Yahoo Music:

"I'm not willing to contribute my life's work to an experiment that I don't feel fairly compensates the writers, producers, artists, and creators of this music. And I just don't agree with perpetuating the perception that music has no value and should be free.

"I felt like I was saying to my fans, 'If you create music someday, if you create a painting someday, someone can just walk into a museum, take it off the wall, rip off a corner off it, and it's theirs now and they don't have to pay for it.' I didn't like the perception that it was putting forth. And so I decided to change the way I was doing things."

Yes! Exactly! What's with the perception that art has little or no value? That artists are somehow obligated to give their work away simply because it's on the Internet and there's that strange, persistent, unsupported "cultural think" that if it's on the Internet it should be free? NO, IT SHOULDN'T! The Internet is like a store. A store where people put up the stuff they're selling. It's not a free box on the side of the road; it's a place for commerce. As Taylor says, we don't ask for free iPhones, so why free art?

But, sadly, we in the book/writing business don't have a champion like Swift. The 2014 kerfuffle between Amazon and Hatchette was just a snit-fest between the Big 5 and big Amazon; it had nothing to do with fair compensation for indie writers. And, let's face it, the proliferation of sites screaming "FREE & BARGAIN BOOKS!!" has exploded, creating a demographic of readers that simply expect books to either be free or so effing cheap the profit margin wouldn't afford the author a latte while writing the next book they'll be browbeaten to "donate" to the undiscerning public.

I can hear Taylor screaming in her jasmine-scented soundproofed vocal booth.

Clearly, I'm no Taylor Swift. There are no legions of fans hanging on my every word; no one cares with whom I'm holding hands. I'm not tall, skinny, and carrying a Brinks vault of awards. I have no power over any industry (though there was a time my catering captain skills were in demand!), and the only thing of mine Apple respects is a decent purchase history of phones and computers. But still... I've been around a long time, I've got artistic bona fides, and some have said (though I can't remember who), I've got a good head on my shoulders. So if I had a bully pulpit, this is what I'd say:

Perpetuating the perception that independent books have little value and should be free or sold for ridiculously low prices is deleterious to the true merit, status, and negotiating power of independent authors. This is not about greed or the overvaluation of unknown writers; this is about the artistry and hard work that goes into creating good books. Excellent books. Books that, if agents and publishers were wrangling them in the traditional publishing world, would be bestsellers. Instead, those authors are struggling to find footing in a slippery marketplace that can't seem to discern between mediocre and masterful, and values/devalues it as "all the same."

Which is folly. If an amateur wants to crank out an unpolished tome to put on Amazon for family and friends, giving that book away for free or one or two bucks, so be it. But if a skilled, professional, highly qualified author puts years in, hires experts to produce, and publishes a masterful book (and I know many of those excellent authors and their excellent books), those books deserve to be sold at prices comparable to any other excellent book being traditionally published. Anything else creates a two-tiered system that designates one group as worthy, the other as not. Which is inherently unfair and vastly misguided, as what publishing category a book belongs to does not necessarily indicate its excellence.

This is about us indie writers and our industry taking a stand to determine that the perceived value of our art is commensurate with any other valued art, and, subsequently, demanding commensurate and fair payment for that art. Let "free" be a choice, not a mandate.

Related articles you might find interesting:
I'm Not Interested In FREE Books
Free Books: Marketing Genius or Devaluation of Writers?
Free Book Promotions: How Good ARE They For Writers?