If you have attended a performance of early music in recent years then you probably know that musicians playing very old repertoire tune their instruments in a different way from that of a modern orchestra. This is often the subject of some good natured audience banter prior to a concert: "They tune to 415," you might hear. Or, perhaps you've told a friend that "The A is low." Indeed, the way historical performers tune is one of the great categorical features that distinguishes us from the rest of the classical music world, a trademark that brands us and has started to increase the palatability of historical performance practice.

One of the cultural icons most deeply associated with classical music is the ritual of an orchestra tuning prior to a concert. Mozart loved this cacophonous sound -- in a letter to his father of October 11, 1777, he writes, from Munich, "I have an impossible longing to write another opera... I have only to hear an opera discussed, or sit in a theater and hear the orchestra tuning up to be quite beside myself." It still incites excitement today -- the lights dim, the conductor and concertmaster take their bow, the oboist sounds an "A," and members of the orchestra adjust their instruments; at once, a disparate group of many is brought onto the same page acoustically. Achieving accuracy requires precision and measurement, and for a modern ensemble this means tuning A until its sound wave measures a certain vibrating frequency -- in 1938 an international standard was adopted by most European and North American orchestras setting A at 440 vibrations per second, or 440 hertz (abbreviated "Hz"). This varies only slightly today: since then the Chicago and Boston Symphonies and New York Philharmonic have risen to 442 Hz; Central European orchestras also tune high. 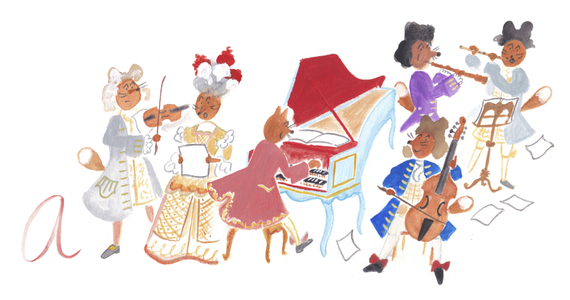 Those of us who deal with music written at a time well before orchestral pitch was standardized must find other markers to inform the number of vibrations we assign our As. Today many period instrument groups tune A as a default to 415 Hz., exactly one half step below modern A (or at about a modern A-flat). "415" has become synonymous with how early music is understood in America, and with the ever-pressing desire for authenticity that can sometimes lead early musicians into the netherworld of blind pursuit contra art, this choice leaves itself ripe for critique (415 is a convenient benchmark for transposition and tends to smell like a piano masquerading as a harpsichord). The trouble lies in the fact that there were many variants of A in early modern Europe, and pitch level ran the gamut from high (up to A=465 Hz. in 17th-century Venice) to low (down to A=392 Hz. in 18th-century France). In fact it varied, much like dialect, from city to city and town to town -- depending, in part, upon the size, shape, and pitch of the local church organ. Bruce Haynes lays this out exquisitely in A History of Performing Pitch: The Story of "A" (Scarecrow Press, 2002).

Considering, however, that Handel and Bach (for most of his life) -- two German composers who form the core of the baroque repertoire -- wrote music in a world where A sounded somewhere in the vicinity of 412 Hz. (a nearly imperceptible difference from 415 Hz.), this seems less a matter of sacrifice than an indication. In the 1980s, a time when playing on copies of old instruments first became requisite for serious performance of old music, some period ensembles had sets of wind instruments commissioned so that they could perform a range of repertoire. This encouraged period pitch standardization and a middle ground was reached: baroque instruments were made to sound at 415 Hz., and classical instruments at 430 Hz. Many of these instruments are still in circulation and the luthiers who made them still in service, and this has had a long -- and lasting -- effect on the period performance world.

When ensembles explore worlds outside these historiographic regulations, magic can happen. William Christie and Les Arts Florissants perform Lully, Rameau, and Charpentier at a historically-appropriate pitch of A=392 Hz., a choice which allows the singers to root their sound in the ground and the instruments to relax. As The New Yorker classical music critic, Alex Ross, wrote of Les Arts' unforgettable production of Lully's Atys at BAM in 2010, the opera "hints at an underworld of secret loves and dangerous passions, to which even the mightiest are subject." A subtle choice of pitch can have a profound effect, and as rarer repertoire than Lully is unearthed and our knowledge about historical instrument making increases, governing performance via historical pitch is increasingly alluring.

Complications can arise, however, as anyone who has played Vivaldi (Italian = high) and Lully (French = low) at historic pitch in the same concert will know. Re-tuning one's strings between pieces would leave an instrument vulnerable to intonation problems, especially considering the propensity of gut strings to alter at the slightest change of climate. For a wind player, who cannot change the pitch of his instrument beyond small adjustments, this means using multiple instruments in a concert. The same goes for harpsichordists, who would require a single-keyboard instrument for an Italian 17th-century concerto grosso, but a larger double-manual for, say, French opera. It all becomes very crowded on stage, and quite expensive -- not to mention difficult on the ear.

The best place to contemplate these issues is at an institution with a resourceful instrument collection regularly put to use, such as a museum (like The Metropolitan Museum of Art), or a conservatory dedicated to historical performance. In fact, the idea for this article was born out of hearing a masterclass with Wieland Kuijken and Juilliard 415 that included French, German, and Italian music, and which put both the School's French and Italian harpsichords to use. What does it mean as a listener, I wondered, to contemplate old music in a space that conduces historically-invested sound, yet at the same time mandates precise intonation throughout the concert from beginning to end? Musicians afterwards told me that their biggest challenge was frankly adjusting their ear as tuning changed from piece to piece, as they migrated from Bach, to Corelli, and to Marais. But what a boon to the field that, finally, musicians are being trained for this.

The next time you find yourself at a performance of early music, think of the variety of pitch at stake, and ask yourself what compensations are being made on stage to convey the work. Experiencing the music more insightfully might yet hinge on that initial question -- "Where in the world is the A?"