One Muslim bride from Australia wanted to pay tribute to the victims of the Sydney siege -- even if it meant changing her wedding day plans.

Manal Kassem took a detour from her celebrations on Saturday to pay her respects outside the Lindt Chocolate Cafe, where Man Haron Monis took the lives of two hostages last week.

Seeing her touching tribute, the crowd broke into applause, The Australian reported.

“She was going to cancel [the photoshoot] because she didn’t want to be judged ... celebrating her wedding in a scarf while people were terrorised,” wedding planner Dina Kheir told the Australian Associated Press. “But she made it her priority to visit the memorial site as the first pit stop.

“She did it out of respect for her country, that will one day be the country of her children and grandchildren,” Kheir added. 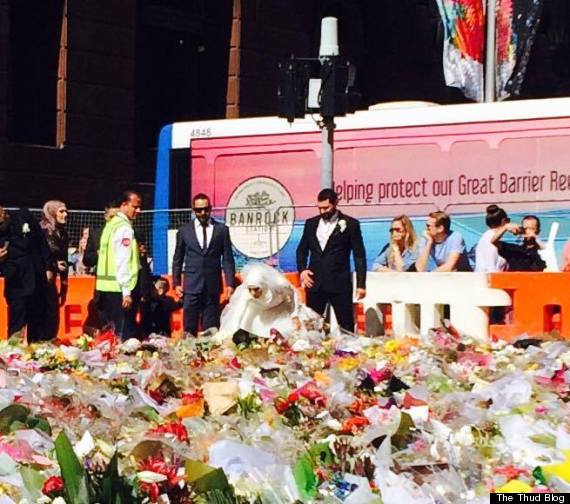 Australians rallied around their Muslim neighbors in the days following the siege, pledging to stand up against Islamophobia by offering to ride with anyone in religious dress who felt unsafe on public transit. The #IllRideWithYou hashtag trended worldwide.

Grieving locals like Kassem have left thousands of flowers and floral tributes at the site to honor the memories of Tori Johnson and Katrina Dawson, who were both killed during the siege. Volunteers removed the flowers from the street on Tuesday, hoping to put them to use in the future.

"Unfortunately the weather forecast suggests that we're going to have to start removing the flowers,” New South Wales Premier Mike Baird told ABC. "We'll be grabbing the flowers and they'll be clean mulched which will enable us to hold them in storage for appropriate future use, hopefully at a memorial site to be determined with the families in the longer term.’

But Australia's woes aren't over yet. Prime Minister Tony Abbott warned citizens on Tuesday that there’s been an increase in “terrorist chatter” in the days following the attack. The country remains on high alert as the Christmas and New Year holidays approach.

"I'm alerting people to the fact that the terror level remains high and at this level an attack is likely," Abbott said, according to NBC.