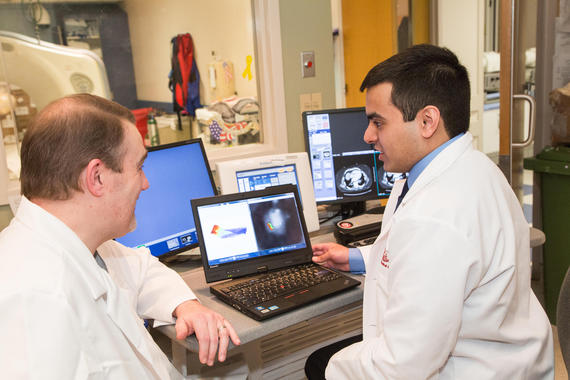 This article is authored by Arshia Wajid, Founder and President of American Muslim Health Professionals (AMHP)

In the current wave of anti-Muslim hysteria, even Muslim health professionals are not immune to bigotry or racial hatred. After the San Bernardino shootings, a Muslim physical therapist in Southern California approached a patient. The patient refused treatment and asked the physical therapist if he was a terrorist.

This is not an isolated incident -- many Muslim healthcare professionals have experienced bigotry in some form. In fact, a recent study published in the American Journal of Bioethics stated that nearly 24% of American-Muslim physicians experienced religious discrimination frequently over their career, while nine percent of respondents reported that patients refused care due to their religious affiliation. This statistic only accounts for physicians, and does not reflect bias against other Muslim healthcare professionals or those who work in various sectors of the economy. Perhaps what is more alarming about these statistics is that the survey was conducted in 2013. Given the recent rise in Islamophobia, fueled by comments made by right-wing politicians, the statistics are likely to be much higher if the survey was conducted today.

Racism and bigotry can affect health care professionals, and Islamophobia is no exception.

"We know that perceived discrimination is a form of chronic stress impacting minority populations. This phenomenon has been well studied and documented. Now it's time to look at Islamophobia as the modality of chronic stress, and Muslim-Americans as the affected population," said Nabeel Ali, a medical student at Albany Medical College. A #MuslimsSaveLives media campaign has been launched aimed at highlighting the integral role of Muslims within healthcare.

Despite the rise in anti-Muslim bigotry, Muslim health care professionals continue to practice their faith in service to their profession. Faisal Qazi, a neurologist based in Pomona, California, and President of Medical Network Devoted to Service (MiNDS) -- a local nonprofit focusing on medical and mental health services - established a national campaign to raise funds for the victims and families from the San Bernardino shootings. In less than three days, the campaign surpassed its initial goal of $50,000 and collected over $215,000 by the end of the campaign.

When one of Qazi's physician colleagues heard about the campaign, he stated that Donald Trump "was right" and that all Muslims should be deported. "While his comment came as a shock, I didn't feel discouraged as our work has been a tremendous empowering force in our lives," remarked Qazi.

Members of American Muslim Health Professionals (AMHP) are also taking charge by working on getting individuals connected to affordable healthcare. In the United States, where the median income is $50,054, having no insurance or having insurance that does not cover essential health care visits means that any illness can create financial hardship -- especially considering that the law now mandates coverage. Under the Affordable Care Act (ACA), the annual penalty for not having health insurance in 2016 is $695 per adult and $347.50 per child (up to $2,085 for a family), or 2.5% of household income, whichever amount is greater.

Compared to two previous open enrollment cycles, this year has been particularly difficult for some of AMHP's ACA State Liaisons in coordinating enrollment events due to a slow or lack of response from mosques. The third open enrollment cycle started on November 1st, just a few weeks before the Paris attack and San Bernardino shooting. With the spike in attacks and vandalism at mosques following these two events, leadership of mosques have been directing their attention to issues of safety and the growing public hostility targeted at their members.

As enrollment deadline approaches, AMHP put out a call for organizations to help coordinate "National Muslim Enrollment Weekend (NMEW)," which was first initiated in March 2014 by Rumana Ahmed. Ahmed worked as Executive Assistant to the Deputy Assistant to the President for Public Engagement and Interim Liaison to Muslim-American and Arab-American communities at the time of the launch. The response from local and national organizations was overwhelming this year; nearly 57 local and national organizations joined this broad coalition from health organizations to Islamic Schools to professional associations to community centers to groups representing different faiths.

This year, NMEW, will be held over Martin Luther King weekend (Jan 15-18th) -- a weekend dedicated to community activism and service. Partner organizations have committed to raising awareness and/or coordinating outreach and enrollment events. The weekend will be preceded with a webinar on Tuesday, January 12th, where more information about ACA will be covered. The webinar will also include remarks from Laila Alawa (CEO, Coming of Faith), Ihsan Bagby (Board Member, Muslim Alliance in North America), Lisa Carr (Senior Advisor, Centers for Medicare & Medicaid Services), Altaf Husain (Vice-President, Islamic Society of North America) and Jesse Moore (Associate Director of Public Engagement at the White House).

Another organization conducting enrollments in the Muslim community is Compassionate Care Network (CCN), a Chicago-based nonprofit that provides healthcare for the underserved as well as other immigrant and low income communities. CCN is partnering with local churches to provide free health screenings for the homeless in honor of MLK National Day of Service.

"By participating in civic engagement and community service, we can bring diverse communities together," says Abrar Quader, CCN's Director of Government and Community Partnerships. "The work of healthcare is an opportunity to build bridges of understanding and highlight our shared values as Americans. We've seen this first-hand with the ACA enrollment among people of diverse faiths, often times meeting for the very first time to get health coverage, breaking down stereotypes while building healthy communities."

Arshia Wajid is the Founder and President of American Muslim Health Professionals (AMHP). In February 2015, she was invited along with 13 other American-Muslim leaders to meet with President Obama at a private roundtable at the White House, to discuss contributions of Muslim health professionals. Arshia received a bachelor's degree in History and a master's degree in Business Administration and Public Health (MBA/MPH) from the University of Illinois and a fellowship in Hospital Administration from Stony Brook University Hospital in New York.