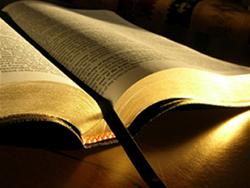 For those who may not know, we are in the midst of National Bible Week, sponsored by the National Bible Association. This is a week, especially identified to raise awareness of the Bible's importance and relevance to the nation and the lives of individuals. During this week, Christians are encouraged to read and study the bible in greater detail. But Christians aren't the only ones who can benefit from it, right?

As an American Muslim, I fully support the goal and purpose of National Bible Week. It may sound strange to hear a Muslim honoring National Bible Week, but I'm not the only one. The Ahmadiyya Muslim Community -- the oldest Muslim organization in America -- supports this week and calls on Americans to join together in this cause of reading and studying the Bible. This is just part of the effort the Ahmadiyya Muslim Community has waged all year long, which is why we have hosted many interfaith symposia throughout the year all over the country on the topic of "sanctity of holy scriptures," where we advocate for respect and honor to all Holy Scriptures.

Why do we do this? One of the core fundamental beliefs in Islam is to honor all revealed books, not just the Quran. Muslims believe in earlier texts in their original form, and the Quran specifically mentions the Scrolls, Torah, Psalms and Gospel. As Muslims, we are expected to honor and respect these earlier texts, which contain guidance from God.

Chapter 5 of the Holy Quran specifically illustrates that both the Torah and the Gospel were sent by God to guide people. Verse 45 states:

Surely, We sent down the Torah wherein was guidance and light. By it did the Prophets, who were obedient to Us, judge for the Jews, as did the godly people and those learned in the Law; for they were required to preserve the Book of God, and because they were guardians over it...

Just two verses later, attention is turned to the prophet Jesus and the Gospel, when it states

The fact is that the Quran affirms the truth of all the previous revelations, including those given to Moses and Jesus. This is because Islam is not just a "religion of Muhammad." One of the fundamental beliefs in Islam is the belief in all previous prophets, whom God has sent throughout history all across the world to guide mankind on the path towards God. In fact, chapter 35 of the Holy Quran makes the bold statement that "there is no people to whom a Warner has not been sent."

Here the Quran tells us that it is not the Prophet Muhammad alone who has been sent as a Divine Messenger to call people to God. Rather, there had been sent to every people in the past a Heavenly Messenger who preached to them the same message of truth and righteousness. Thus it becomes an article of faith with Muslims to believe in and equally respect all prophets. By giving the world this sublime truth, Islam seeks to create an atmosphere of amity and goodwill among different faiths and to remove that rancor and bitterness which has ruined relationships between followers of these faiths.

Because of the honor and respect my holy scripture lays on the Torah and Gospel, I fully support the National Bible Week and its effort to encourage more people to read, study and understand the Bible. To do this is to follow the guidance of God. After all, it is said in chapter 3 of the Holy Quran: "And He will teach him the Book and the Wisdom and the Torah and the Gospel."

Our desire is to bring people towards God, and to do this, one must understand their faith. I welcome all people across the nation to spend some time this long weekend reading and studying the Bible. And don't be surprised to find Muslims doing so as well.