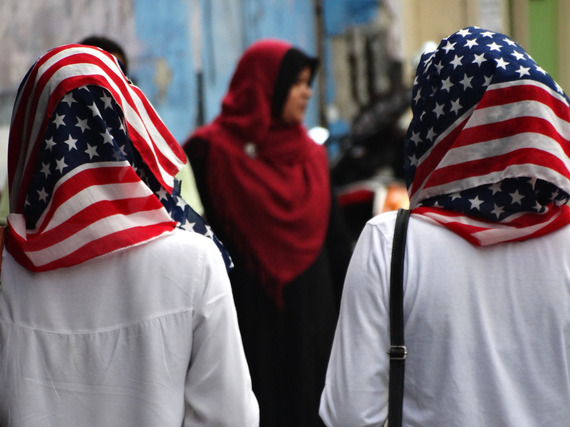 The first twenty years of my life have been spent between the San Francisco Bay Area, the Middle East, and Washington, DC. Indubitably, I have enjoyed the luxuries of a life that has been enriched by the varied cultures, colorful traditions, and - most importantly - different religions of my cohabitants.

Two weeks ago, I moved to the Midwest, and I realized that I took much of my life for granted.

Since my transition, I have been bombarded with stink-eyes and strange looks. I've received poor customer service that at times crossed the line into harassment. A driver almost deliberately ran me over with her truck. So many baristas have spoken to me as if I didn't speak English, or stared at me with some magnitude of fright or awe, that I've unintentionally severed my coffee intake to a fraction of what it used to be, and have now resorted to making my own brews at home.

By stepping outside, it's as though I assume the role of a travelling circus. I pray for people to ignore me, and spend most of my time staring at the ground in discomfort.

Toto, I've a feeling we're not in Berkeley anymore. I've landed in Oz, except instead of a wicked witch, some people are acting as if I dropped a house on their dog.

Why is this? I was born and raised in America. I'm fluent in English - heck, I majored in English. I'm even half white. What is the problem here?

The problem is that we live in a world of prejudice, assumption, and association. More importantly, we live in times of fear. These conditions have caused alarming repercussions for Muslims far and wide, with no major sign of ceasing.

In December, four men were removed from an American Airlines flight from Toronto to New York without just cause. Two Bangladeshi Muslims, an Arab Muslim, and an Indian Sikh, each one a United States citizen, were ejected from a flight because their presence made the cabin crew feel "uneasy." No security threat, no inappropriate behavior - just brown skin, a turban, and companionship.

Shan Anand, one of the men behind these allegations, said "when I was coming off the plane, I kept thinking, 'What did we do?' But it was just because we looked a certain way" (CNN).

In a similar November incident, Kameelah Rasheed, a New York City resident and Stanford University graduate, claims that she had been discriminated against when she was the only person removed from her 200-person flight from the US to Istanbul.

"I was the only visibly Muslim person," she told Al Jazeera. Like many American Muslims, Rasheed wears a headscarf due to her religious beliefs.

Over the weekend, a Moroccan immigrant in Philadelphia faced a vicious attack after being heard greeting a white woman in Arabic. Amine Aouam, a hotel valet and part-time student, was subsequently cursed at by one man and beaten from behind by another. He woke up in a hospital, and is now missing both work and school to obtain CAT scans and MRIs for follow-up health examinations.

"To be honest, the only bad thing that happened to me in this case is my heart is so broken now," he said.

"They hate you because you talk something that they heard before and they don't like it," he said.

This type of recurring discrimination is almost understandable... if one's only knowledge of Muslims is the villainous Jafar from Disney's Aladdin.

Negative images and stereotypes are perpetuated by our news stations, Hollywood films, and even the history textbooks our children bring home from school. Our academic discourses and attitudes towards foreign policy and orientalism have created a trickle-down effect that permeates the minds and alters behaviors of American citizens.

Unfortunately, the way many Muslims look and dress is actively associated with terrorism, fear, oppression, backwardness, and anti-American values. However, these stereotypes can change - they just have to be unlearned.

There are already some attempts to humanize Muslims that have garnered a significant digital following.

Founded last spring by UC Berkeley students, Humans of the MSA is a student-run media project that aims to deliver snippets of the lives and personalities of members of the Muslim Student Association, an organization of Muslim students and alumni that exists on college campuses nationwide. The project features photos of Muslims and MSA members across the United States along with a personal quote.

This project is inspired by Humans of New York, which has by itself done magnitudes in exposing different Muslim identities through visual media, both in the Unites States and overseas - most notably in Pakistan and Iran.

In September, H&M debuted their fall 2015 fashion line, along with their first Muslim and headscarf-wearing model, Mariah Iidrissi.

The popular MuslimGirl blog writes "[I]drissi didn't just model for an ad campaign, she awakened the people. In a simple and quiet way she made others look at a Muslim woman without fear or contempt but with a healthy curiosity. Maria[h] opened a conversation that has always been strained" (MuslimGirl.net).

These efforts, intentional or not, have done a great deal in advancing Muslims in the public eye, showing them for who they really are instead of what modern and historic Western discourses claim on their behalf.

Living in the Midwest, I realize that the humanity of Muslims is best displayed just by being there. Better than an image of a random person, you witness me. We enjoy the same coffee, sports teams, and public parks. We suffer the same snow, TV series cliffhangers, and gas prices.

Maybe it's a blessing, perhaps it's a curse, but it is undoubtedly a reality for many if not most Muslims that the faith we uphold bestows another role, an ambassadorship that we did not solicit. In this country, we are the PR people of our minority, and the job pays what we put into it.

I've been given an oddly wrapped gift; instead of surrounding myself with those I know are bound to tolerate my ways, I find myself among those who may not. Now, I am in a position to broaden someone else's horizons, as well as my own.

Two weeks ago, I started a new life in a state whose presidential candidate of choice thinks it's a good idea to "ban Muslims." It's time to make the most of it.