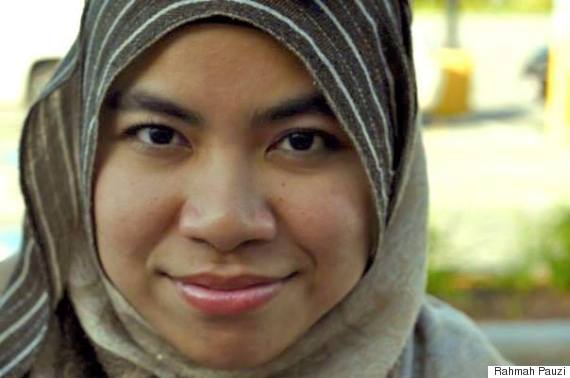 Rahmah Pauzi is a graduate student at the Arthur L. Carter Journalism Institute at New York University. Pauzi is from Malaysia, which has a large Muslim population. She came to the United States four years ago for undergraduate studies at the University of Massachusetts Amherst.

Here, Pauzi tells about coming to the U.S. and being seen as "the other," and shares her thoughts on the need for diversity in the newsroom.

I came from Malaysia, where about 55 to 60 percent of the population identify as Muslim -- or at least that is what the system identifies them as. It is a country that is diverse and rich with cultures and many religions are practiced there -- sometimes peacefully, but some other times religion and its practices are also politicized, just like in many other parts of the world. But I remember feeling really comfortable holding up my identity as a Muslim and as a Malay growing up.

Religion and racial matters are quite contested in Malaysia, or at least politically (and that deserves a whole other blog post on its own), but when you realize that half of the country pretty much looks like you and that everyone acknowledges you as one of them, you do not tend to question your social space in the society as much. But when I was awarded a scholarship to complete my undergraduate study in the States and moved here four years ago, my perspective changed.

Overall, my experience here in the States has been more than amazing. My college years in Amherst, Massachusetts, have made me the person I am today and I would not change a bit about it. I made a lot of really good friends who I know would always be around for me. Trying to fit in at the beginning was exhausting nonetheless, especially when you're removed thousands of miles away from your comfort zone, but I learned so much from it.

I graduated with a degree in journalism in 2013 and I am now in grad school pursuing journalism and documentary. I'm enjoying every part of it, but my most valuable experience here does not come from being in lecture halls, or from writing countless academic papers, or from shooting hours of video. It was from realizing that I, indeed, look very different from my peers -- and that has put me in a certain social space that I never occupied before.

I don the headscarf, or the hijab, as some here would prefer to call it. I started wearing it when I was 5, and in a country heavily populated with Muslims like Malaysia, wearing the headscarf was not a struggle. It was something that makes the most sense out of anything else -- at least to me. So if someone here asked me to tell him what were the struggles I faced when I decided to don the headscarf, I'd say: none. Or I just cannot really answer it, because I cannot remember the time when I was not wearing it.

In Malaysia, the headscarf was the norm. I never questioned it and I grew comfortable in it. It became a part of me, and it became me. So when my headscarf made the heads around me turn with curiosity whenever I crossed my college hallways, I did not only start questioning my religious practices. I started questioning my existence as a person.

After living my life for 20 years and never having to care about how I look, I slowly started noticing how different I look. In America, I’m “the other.” I think my experience as a Muslim in an American college really is not grounded in my external experiences, but it was mostly about how those innocent and mild gestures that I experience externally are internalized, and how they are negotiated in forming my consciousness.

Journalism, interestingly, is also a field not popular among women who don the headscarf. So in a class filled with 30 students, I usually stand out. I sometimes find myself having to answer certain questions in class or cover certain stories because of how particular I look. Looking at these things from the outside, it is easy to say that these attention and decisions come around innocently. But having been in this situation for almost four years, I know my appearance does cue a certain kind of expectation from some people around me.

Sometimes, in the newsroom, my views on certain matters get amplified or taken more seriously due to how particular I look, though I know that often I am not the most knowledgeable person in the room. I would not call it a burden of representation, but the peculiar situation does push me to constantly examine and re-examine my words, my gestures, my practices and, often, myself. But day by day, I learn to mediate these expectations.

But to me, if my experiences have to reflect on anything, I think they should mostly highlight the importance of diversity in the newsroom and media, and everything that it wants to represent. Diversity is access, and the more diverse a newsroom is, the more access you get to marginalized stories, and the more journalism can provide voice for the people. Any stories that revolve around Islam as a religion and its contested political weight today do not have to always go to the only seemingly-Muslim journalist in the room -- if your newsroom is diverse enough to represent the world for your audience.

Living in the States and doing journalism here has made my academic experience extremely rewarding. I have become more sensitive toward people than I have ever been in my life. While being "the other" often puts me in a position where I have to constantly re-evaluate myself, it also prompts me to be more critical toward my surroundings, and I greatly value this new perspective. I think it is also important to be in dialogue with each other and learn about the person next to you as much as you can, because in a country as diverse as the United States, knowledge and empathy are the only things that will save you from ignorance.

And if anyone asked me about how it is like to be a Muslim student in America, and being thousands of miles away from my family, I’d say: Besides feeling homesick occasionally, my life here has its ups and downs -- just like any other college kid in America. Also, guess what? It has been perfectly fine.