Fatima Ali and her group of Muslim friends host an annual Friendsgiving, and this year they decided to commemorate the occasion in an epic way. For this year's family photo, shot by Atif Ateeq, they perfectly recreated Da Vinci's "Last Supper." 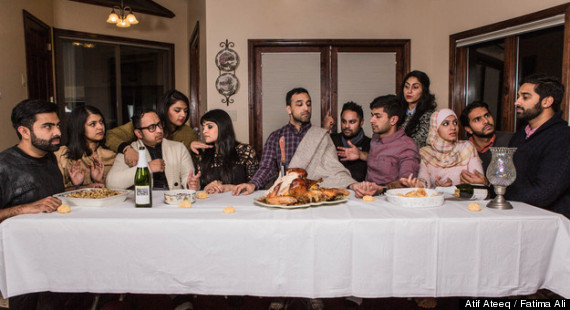 Ali told The Huffington Post, "For this year's photo, we wanted to do something that, in its own humble way, aimed to bridge the gap between Eastern and Western cultural and religious norms. We looked up the painting, assigned each person a character, and meticulously tried to mimic the image, while also making it our own."

The pictured group enjoyed the process of putting a different spin on the the iconic artwork. "Most of the people pictured in this photo have been active members of the Islamic Center at NYU, and I think one of the greatest values we all have shared is this overwhelming sense of community and religious unity," Ali said. "I don't mean just Muslim unity or Muslim community, I mean on a more universal level, being respectful and considerate of all faiths and religious communities."

She said that some Christians have commented on the photo to say that "this is probably what the people sitting at the Last Supper actually looked like (brown skin, darker features, etc.) instead of the alabaster faces that are strewn across Da Vinci's original work," while others took offense at their recreation of a sacred Christian moment.

However, Ali says, "For better or worse, we have genuinely appreciated everyone's comments. Our goal was to start a discussion, to open minds, and to obviously have a killer holiday card that would rival the Kardashians."