LEESBURG, VA. -- A few months ago, as Hidayah Jaka helped her mom load groceries into their minivan, a group of men pulled up in a car, shouted at the headscarf-wearing girl and her mother to "go back to your country," and sped away.

Hidayah, who was born 13 years ago in the Washington, D.C., suburbs, went quiet.

Some people are scared of Muslims, her mother reminded the girl, because of what 19 men did a decade ago on 9/11. Some people even hate them, she said.

"God doesn't even want us to lie. How would he ask us to kill someone?" Priscilla Martinez said to her eldest daughter, echoing a refrain familiar to her six children.

It wasn't the first time Hidayah had heard of Sept. 11, nor was it the first time the Jaka family, whose children are all too young to have any memory of that day, had discussed it. It was one of dozens of times the Muslim family has had to confront the day head-on.

For the parents, who saw Islam transformed overnight from an often-ignored religion to one of the most-discussed in the country and who can share stories of love and hate in the face of tragedy, there's a stark contrast between being a Muslim in the United States before 9/11 and after. But a new generation is coming of age who hasn't known that divide.

The Jaka children, ages 4 to 13, have learned about 9/11 through books, television, taunts and the peculiar osmosis experienced in a society where the attacks pervade the collective consciousness. In the process, they have also learned about what it means to be a Muslim in America today.

"I know what it is," says Hidayah's younger brother Mikaeel, a soft-spoken boy who has yet to master American history and has never seen ground zero, but can tell you the sequence of events on 9/11. Airplanes hit "the twin towers, and thousands of people died," he says. "They hit the Pentagon, too." It was "terrorists, people who do really bad and mean things." But "it would be unfair to say Muslims are terrorists."

Mikaeel, a Little League baseball player who sports a felt jacket covered with badges earned in Pack 1576, a Muslim Cub Scouts group run out of the ADAMS mosque in Northern Virginia, was born in April of 2001. Home-schooled along with the rest of his siblings, he has grown up with Islam woven into his daily life. The Jaka home is decorated with crescent stickers, Quranic calligraphy and streamers proclaiming "Eid Mubarak," a traditional greeting to mark the festive end to the Ramadan month of fasting. A bare sitting room is reserved for eight prayer rugs, where the family bows toward Mecca five times a day between science lessons, reading time, music practice -- Mikaeel is learning acoustic guitar -- and bouts of playing Nintendo Wii. 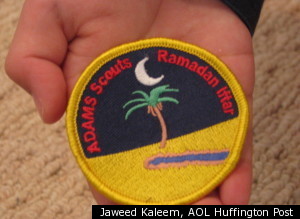 Two weeks ago, the Jaka family sat down for a meeting in their sprawling home on the outskirts of the Washington metropolitan region. The children had started to notice again the vaguely familiar scenes of destruction on TV that tend to replay around this time each year. The parents wanted to help them understand.

"The people that did that are evil. Muslims would never do something like that. There is nothing to tell us to do that," says Hidayah. "I don't remember it," she adds, but "we should always remember what happened. The people that lost their lives, the people that helped everybody out of that building. It was a horrible."

When catastrophe struck a decade ago this Sunday, Rizwan Jaka had just arrived at his office in Northern Virginia, where he works as a computer engineer. Martinez was at home with the kids. That morning, they stood shocked in front of their TVs and wept as they saw planes crash into buildings and heard of frantic friends and coworkers who lost loved ones. That night, their mosque was vandalized and a wooden sign in front was burned to the ground.

"My first thought was fear for my wife and my daughter," says Jaka, a 39-year-old who was born in Texas to Pakistani immigrants. "We had a choice to make that day," says Martinez, 37, a third-generation Mexican American and a former Catholic who doubles as the kids' teacher. "We would work for peace. We would work for understanding."

The Jakas are the only Muslims in their small community just outside Leesburg. Sept. 11 spurred the parents, who were already involved in nascent interfaith groups at their mosque, to push themselves, and by extension their kids, outward. For 13-year-old Hidayah, 12-year-old Jibreel, 10-year-old Mikaeel, 8-year-old Israfeel, 6-year-old Raqeeb and 4-year-old Ebaadah, life has been a long lesson shaped by 9/11.

Each week, Mom and Dad take the kids to a new interfaith event, a new peace walk, a new synagogue or church or Hindu temple, to show them the "best parts of religion and what this nation's people have to offer," Jaka says. At home, Martinez has bought the kids Islamic-themed novels and a picture book of Muslim contributions to society, from algebra to roasted coffee. Islam should be a point of pride, Martinez tells her children, not something to hide.

Sometimes, other girls on the soccer field ask Hidayah, who wears the hijab, if she's "hot under there." No, she assures them, before inviting them over for dinner. Once after music class last March, a car full of men shouting in mock Arabic drove past the family. But such incidents are the exception, Martinez says.

Not all Muslim families have been so lucky or chosen to be so outgoing in their approach. During the last decade there have been hundreds of violent crimes committed against Muslim Americans, each with its own motivations. But after the initial spike in 2001, anti-Muslim violence subsided in later years. In addition, recent surveys of Muslim Americans have shown them to be happier and more optimistic with life in the United States than the general population.

Nonetheless, the Jaka kids have become accustomed to hearing their father, a board member at his mosque and a member of several Northern Virginia interfaith groups, being asked what Muslims are doing to combat extremism when visitors come to the house of worship.

The questions used to confuse them. What did their dad or anybody they know have to do with the planes crashing on TV? "But it's our responsibility to answer those hard questions," Jaka tells them. "People are going to ask about you. And you have to be able to tell people about Islam."

For Hidayah, who is more likely to play softball or speed down the Shenandoah Mountain on her mountain bike than contemplate her place in a post-9/11 world, distancing herself from "those horrible people from that day" is just another part of being a young Muslim.

Sitting in their basement recently, Jaka taught his children a lesson from the Quran, quoting from Surat al-Ishirah, a chapter of the holy book that translates to "solace" or "comfort" in English. Many Muslims believe it was revealed by God to the prophet Muhammad when he may have been confused or unsure of how people would receive the new religion and its different lifestyle.

God told the messenger: "With every difficulty, there comes ease."