NEW YORK -- The mere mention of the word "Muslim" or the simple discussion of Islam is not political, a federal judge ruled Wednesday, ordering New York City's Metropolitan Transportation Authority to allow a series of subway advertisements for the documentary "The Muslims Are Coming!"

The documentary follows a group of Muslim comedians on a standup tour of the United States in an effort to combat Islamophobia. The film's production company, Vaguely Qualified Productions, sued the MTA in July after the agency wouldn't allow a subway ad campaign promoting the film.

The ads in question were decidedly lighthearted and disarming. One poster reads, "BEWARE: The MUSLIMS are COMING! ... And they shall strike with hugs so fierce, you'll end up calling your grandmother and telling her you love her."

PHOTO GALLERY
The Muslims Are Coming!

According to the MTA, however, the campaign violated a new rule it had instituted in April, barring any ads that expressed an opinion regarding “disputed economic, political, moral, religious or social issues.”

The agency had implemented the rule to safeguard itself from legal challenges it often faced when rejecting ads with sometimes vile political messages. (Courts, for example, had previously forced the MTA to post Islamophobic ads created by the American Freedom Defense Initiative, a hate group.)

The decision to not allow the "Muslims Are Coming!" subway ads, lawyers for the MTA argued, was a "reasonable and viewpoint neutral" decision.

"Indeed, the evidence before the court plainly indicates that VQP's silly advertisements were subject to greater scrutiny than other potentially controversial ads," she wrote. "An advertisement for Freelancers Union that was accepted by the MTA and displayed in the subways included the following text, in comic book-style font: "Funny how corporations are people when it comes to politics but faceless machines when it comes to PAYING actual people."

Judge McMahon pointed to other ads the MTA had accepted. There was a CNN ad for the network's coverage of a Republican presidential debate, which included photos of the candidates alongside quotes, including John Kasich's: "It is a bad system when billionaires can pick the one who can be the president."

And the MTA accepted an ad for the television show "Mr. Robot," which included text saying, "PRIVACY IS A MYTH," "CORPORATIONS OWN YOUR MINDS" and "BANKS OWN YOUR MONEY."

The "Mr. Robot" ad in particular, Judge McMahon wrote, was "more blatantly 'political' ... than are [Vaugley Qualified Production's] ads for its movie, which take on religious intolerance with gentle humor."

"And that the advertisements at issue gently mock prejudice and employ Islamophobia as a comedic device does not make their message 'prominently or predominately' political," the judge added.

“We’re thrilled that the judge in this case recognized that our Muslim background was not a political issue,” said Obeidallah in a statement. “Like so many other comedians, we can continue performing and make people laugh by using our personal lives and experiences as fodder for our shows.”

"Shutting down a couple of American Muslim comedians from spreading delightfulness on the subway? That never made sense,” said Farsad. “This has been a victory of reason and freedom of speech over ridiculousness. MTA subway posters just got way more hilarious and 100% more Muslim.”

Glenn Katon, the legal director at Muslim Advocates, which filed the lawsuit on behalf of Vaguely Qualified Productions, said that “the court decision upholds our claim that sharing humor and stories by and about American Muslims educates the public about the Muslim community and should not be considered political speech,”

Adam Lisberg, a spokesperson for the MTA, told The Wall Street Journal that the agency is reviewing the judge's decision. 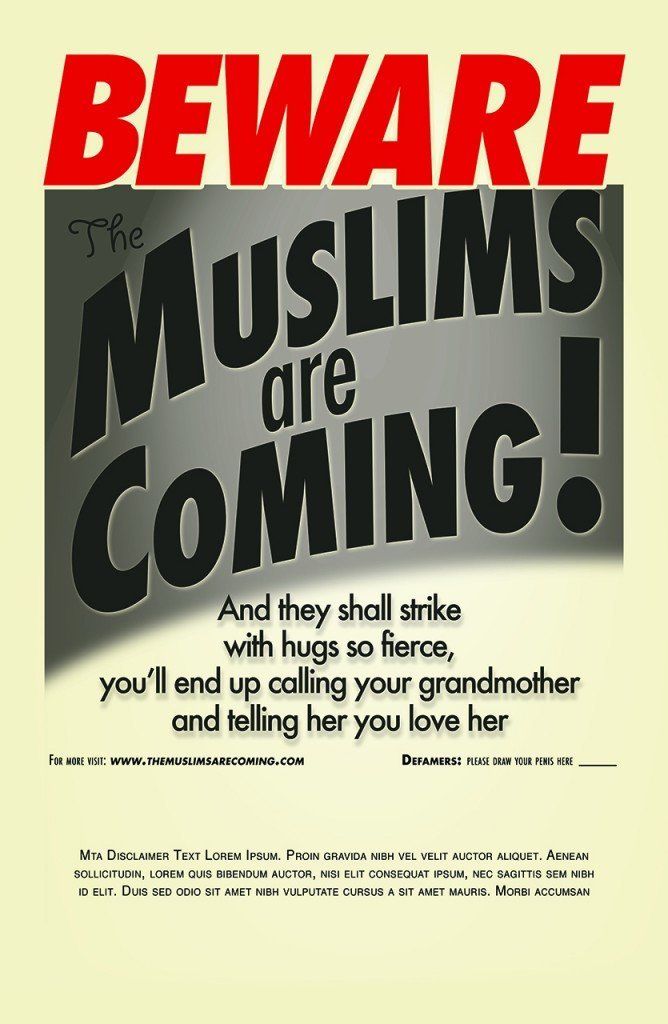