NEW YORK -- As the imam at the Muhammadi Community Center, a mosque and Islamic center in Queens, Mohd Qayyoom has closely watched reports that the city's police department planted informants in dozens of mosques in New York City and its suburbs in recent years as part of a sweeping anti-terrorism effort.

Like many imams, he has wondered if his own mosque had informants, such as those who were revealed by an Associated Press investigation to be keeping tabs on sermon topics, Muslim-owned restaurants, Islamic university clubs and discussions on current events and politics across Muslim communities in the Northeast.

But unlike most Muslim leaders and civil liberties organizations that have spoken out strongly against the police department's efforts, which reports have said may have been based solely on religion, Qayyoom stood in front of the NYPD's downtown headquarters Monday to throw his support behind the police.

"A real Muslim has no problem with spying if it is to keep us safe," said Qayyoom, who leads about 100 people in prayer each week at the Queens mosque. "We have nothing to hide."

He joined a coalition of about two-dozen Muslims, most representing organizations outside New York, who gathered in the city to rally in support of the NYPD's surveillance program, which has resonated far beyond New York as civil rights groups and politicians across the country have taken sides with some calling for federal and state investigations of the department.

Standing in front of a large red, white and blue banner that read "American Muslims Support NYPD" with signs denouncing the Council on American Islamic-Relations and the New York Times editorial board, which have strongly opposed the surveillance program, members of the American Islamic Leadership Coalition took turns voicing their concerns.

Their takes were varied. Some said they were worried about police tactics, but wanted to mend relations with law enforcement. Others were concerned that many mosques had become homes for radicalization and said police needed to know what was going on inside. Most felt that the Islamic organizations speaking out for Muslims on the issue had left out their voices.

"We feel there has been one side of the position put out by the New York Times and the AP with these stories, but from a factual perspective they need some details. We can't be so quick to judge," said Zuhdi Jasser, a Phoenix-based doctor who organized the event. "If you welcome an atheist or anyone else to share your faith, why should you care if the government is in there gathering data and doing nothing different than what they do in neighborhoods where there are gangs or where drugs are being sold?"

Jasser is the founder of the American Islamic Forum for Democracy and describes himself as an orthodox Muslim. He made headlines earlier this year when reports surfaced that a film about radical Islam he narrated, "The Third Jihad," played on a continuous loop at an NYPD training room and was shown to 1,500 officers. The film argues that Western civilization is under attack by radical Muslims and by some moderates who the film says may be more radical than they lead people to believe. It uses violent images of terrorist attacks and testimony of Muslims and terrorism experts to make its case.

New York Mayor Michael Bloomberg has said it was "terrible judgment" to show the film to police, but he has defended the NYPD's surveillance program. Manda Zand Ervin, the founder of the Maryland-based Alliance for Iranian Women, was interviewed in the film and also spoke on Monday in support of the police.

She was joined by her daughter, Banafsheh Zand-Bonazzi, an Iranian Muslim activist and journalist from New York, who echoed a theme repeated by many of the attendees. "I don't want to take away anyone's rights," Zand-Bonzassi said, "but at times like these, righteous indignation for the sake of righteous indignation is a joke."

The Muslims at the rally, many of whom said they pray at home and do not attend mosques, and others who described themselves as secular Muslims, were joined by Rep. Peter King (R-N.Y.), the chairman of the House Homeland Security Committee. King has hosted a series of high-profile congressional hearings about radicalization in mosques and Muslim communities. Many Muslim organizations have criticized the hearings for singling out their religion and for having few Muslim witnesses besides Jasser.

At the rally, King praised the NYPD and called the demonstrators "the real face of Islam in America." He said that he refused to have his congressional committee investigate the police department because "there has been no evidence of wrongdoing."

But not everyone in the crowd was a fan.

Linda Sarsour, the executive director of the Arab American Association of New York and a vocal opponent of the NYPD's program, said she came to observe the other side.

"Sure, do surveillance, but don't do it to everyone," she said. "Base it on intelligence, but don't profile based upon religion."

Ayaz Ahmed, a health care worker who had walked over to the demonstration from his nearby office, said he fell "somewhere in the middle."

"I'm a Democrat, I don't even like Peter King," said Ahmed, who called himself a non-practicing Muslim but said he has been to many mosques in his life where he thought sermons weren't peaceful. "But I am glad somebody is watching over the mosques." 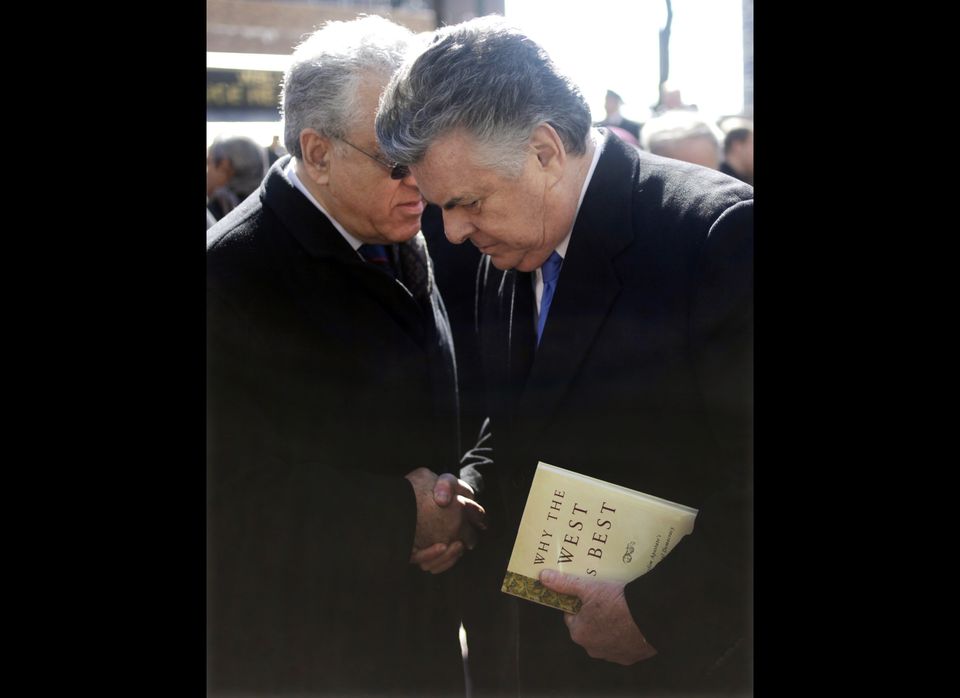 1 / 9
U.S. Rep. Peter King (R-N.Y), right, chairman of the House Committee on Homeland Security, meets with supporters at a news conference in front of police headquarters in New York, Monday, March 5, 2012. King was present with dozens of activists to demonstrate support for the NYPD and their surveillance of Muslim communities. (AP Photo/Seth Wenig)