Abu Bakr Al-Baghdadi is on a killing spree of Christians, Yazidis, Shia and other Minorities in Iraq and Syria. We urge Muslims to pray for Sanity to prevail, and urge the World powers to give a final warning to Al-Baghdadi to surrender or face the drones. 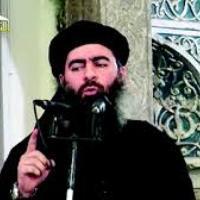 In behalf of Muslims, I strongly condemn the evil acts of Abu Bakr Al-Baghdadi for terrorizing Christians, Yazidis, Shia and other minorities in Iraq. He is an evil man and must be caught and processed for his crimes against humanity, there is Genocide in making, and I recommend a bounty be posted to get him dead or alive.

1. We urge Muslims around the world to dedicate their congregational Sermon on Friday, August 15, 2014 and or August 22, 2014 for the safety of Christians, Yazidis, Shia and others in Iraq and Syria, and restore law and order, and safety to the victims of oppression.

2. Christians are fleeing Iraq, and their population is dwindling from a Million down to 400,000, it needs to be stopped at once. No human should be thrown and forced out of his or her home, and thanks to the US initiative to rescue the Yazidis.

3. The Gang leader Abu Bakr Al-Baghdadi has given a despicable ultimatum to the Christians, "We offer them three choices: Islam; the dhimma contract - involving payment of Jiziyah; if they refuse this they will have nothing but the sword."

4. No one should have the right to chase any one out of their own homes. Quran recommends severe punishment to the oppressors and suggests hunting them down where ever they can be found and punish them accordingly, unless they sincerely repent and back off. It's time to apply the Quranic rule to these criminals.

5. We urge the European Union to drone the terrorists individually without hurting the innocent civilians to prevent Genocide. The United States does not have a moral ground to stand on, as we have justified bombing civilians in the Gaza crisis, shame on us, our Senators and Congresspersons.

6. The terrorists who call themselves religious and carry the labels of Islam, (ISIL or ISIS) have beheaded hundreds of innocent people, crucified former Muslims who freely chose to follow Jesus Christ, destroyed dozens of Christian churches, burned sacred manuscripts and sacred art, and sent hundreds of thousands of Christians and other religious minorities fleeing for their lives in a reign of bloodshed and terror (Catholic.org)

7. We urge the media to call them anything under the sun but caliph, Caliphate, or Islamic State. There is no need to give a semblance of legitimacy to Abu Bakr Al-Baghdadi and his gang. We have to reject his evil claims of his acts as Islamic. Our attitude should be, "You are the murderer and not your religion, and you are going to pay a price for it, either surrender or face the drones".

8. If there were a certificate given to an organization to operate as an Islamic entity, Abu Bakr Al-Baghdadi and his gang's application will be rejected for the gross violations of Islam, a few are addressed here;

a. There is no compulsion in Islam -- no one can be forced to believe against his or her will (2:256) -- how dare they make the despicable statement to the Christians of Iraq to convert or run.

b. Prophet Muhammad (pbuh)'s covenant states, "It is not permitted to remove a bishop from his bishopric or a Christian from his Christianity, a monk from his monastic life or a pilgrim from his pilgrimage or a hermit monk from his tower. Nor is it permitted to destroy any part of their churches, to take parts of their buildings to construct mosques or the homes of Muslims. Whoever does such a thing will have violated the pact of Allah, disobeyed his Messenger, and betrayed the Divine Alliance."

c. Prophet Muhammad (pbuh)'s covenant states, "No Christian will be made Muslim by force: And dispute ye not with the People of the Book, except with means better [29:46].

d. In another Hadith (Prophet's sayings) quoted by Abu Dawud, Prophet in essence says, if you are unjust to a Christian or a Jew, by God, on the Day of Judgment, I will stand up against you. Here is the quote, "Be aware, that whoever oppressed one who has a treaty with us, or belittled him, or burdened him with more than he is capable of, or took something from him forcibly with him being displeased, then I will be his plaintiff (will argue against him) on the Day of Judgment."

9. Please feel free to visit www.WorldMuslimCongress.com for updates and related reports on the subject.

To be a Muslim is to be a peace maker who seeks to mitigate conflicts and nurtures goodwill for peaceful co-existence of humanity. Our work at is geared towards building a cohesive society where no human has to live in apprehension or fear of the other. World Muslim congress is a think tank and a forum with the express goal of nurturing pluralistic values embedded in Islam to build cohesive societies. If we can learn to respect the otherness of others and accept each other's uniqueness, then conflicts fade and solutions emerge. Mike Ghouse is a Muslim Speaker thinker and a writer.