The wrestling match now unfolding in California over a proposed ballot measure aimed at exterminating gay people is actually a teachable moment, and not only about religious extremism and violent hate. It calls attention to the value of a simple screen test for the subjects of initiatives and constitutional amendments. In this area, California might take a lesson from the state of New Mexico. 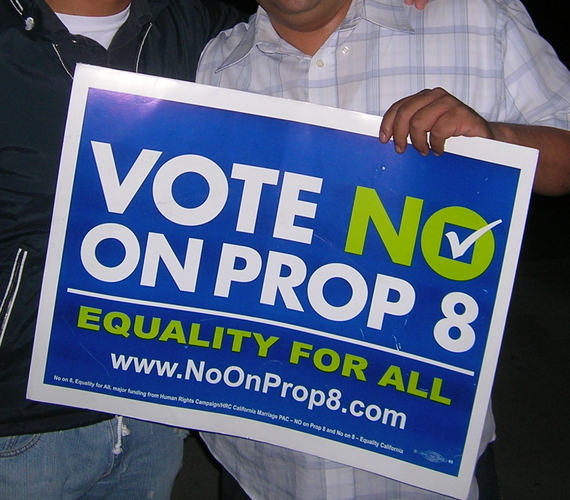 Last month a young attorney from Orange County filed the so-called "Sodomite Suppression Act" with state Attorney General Kamala Harris' office in Sacramento, along with the standard processing fee of $200. The measure, like the preamble to the state constitution, invokes "Almighty God," but in this case to demand that gay people "be put to death" lest "all of us should be killed ... for the folly of tolerating wickedness in our midst." The measure would also disqualify any gay-friendly public servant and enlists Californians as anti-gay vigilantes to quash civil liberties as well as lives.

The measure prompted several days of public deliberation by state lawyers, questioning their obligation under state law to grant it a provisional title and send it forward to the petition stage. It has also sparked debate among state lawmakers about significantly raising the filing fee for such initiatives.

But are financial hurdles a reliable deterrent to the well-resourced nationwide network of anti-gay intolerance? This far-reaching empire of domestic hate, now succeeding in colonizing the polities of other countries such as Uganda and Russia, just succeeded in passing an austere new law in Indiana that permits discrimination against gay people. Mike Pence, the GOP governor who signed the vicious law, is the former chair of the Republican Conference in the U.S. House of Representatives.

The kind of sadistic bigotry expressed in the "Sodomite Suppression Act" might have a more lasting antidote in a small amendment to the California constitution. It would create a common-sense filter on initiatives cleared to gather signatures. No initiative or amendment that threatened the health or safety of any group of Californians would be permissible. That language could modify Article II, Section 12, which already forbids initiatives and constitutional amendments that name a person for an office or give a function, power, or duty to any private corporation.

As Californians know from recent experience with Proposition 8 in 2008, our constitution can be amended by a mere majority vote. Indeed, a rudimentary change to the constitution's provisions on initiatives, Proposition 219, was approved by more than two thirds of voters in June 1998. While the process can be protracted and a campaign for even a foolproof policy may be cumbersome and costly, it is a process worth considering in light of the risk that such an attack by ballot measure on another minority group will recur.

And there is precedent for a screen on initiatives or constitutional amendments that might jeopardize the health and safety of residents, in the constitution of New Mexico. Article IV, Section 1 stipulates an exception against any referendum proceeding to a vote of the people on "laws providing for the preservation of the public peace, health or safety."

New Mexico, unlike California, does not allow direct constitutional amendments or initiatives. However, the constitutional language barring consideration of measures placed before the public that might endanger "health or safety" served as one foundation for a 2004 decision by then-state Attorney General Patricia Madrid to block a proposed effort to outlaw marriage equality in the state. In a May 2004 memorandum ruling not subject to appeal, Madrid held that any such effort could place the health or safety of LGBT New Mexicans in harm's way.

When it comes to amending the constitution, New Mexico's constitution is even clearer in the screens it imposes on subjects and purposes. "No amendment shall restrict the rights" created under its guarantees of equal voting rights or access to public education.

The history of New Mexico's constitutional protections against misuse of majority power to stigmatize or marginalize a minority date back to the period just before statehood, in 1911. They owe in large part to the editor of a Spanish-language paper called La Voz del Pueblo. That same year, when Californians narrowly approved the right of women to vote, New Mexico was embroiled in a long-lasting feud over land rights.

Lawyers close to the territorial government in Santa Fe, and closely aligned with the Republican Party that dominated Washington, D.C., and controlled the territorial patronage system, would routinely misuse authority over the law to defraud residents of land and enrich themselves from sales to ranchers and settlers from the east.

Against this backdrop, a Jesuit-trained journalist named Ezequiel Cabeza de Baca became very involved in labor and Democratic politics in the territory. He joined in crafting the state constitution and authored its many provisions stipulating protections for Spanish-speaking residents, including full access to public education, voting, and requirements to publish legal and legislative proceedings "in both English and Spanish" in state newspapers. Cabeza de Baca was elected the first lieutenant governor of New Mexico in 1912 and then the second governor of the state, in 1916.

California, with its own history of pluralism and environmental activism, often fashions itself a trailblazer on progressive public policies. Indeed, the openness of its initiative process is one enduring legacy of progressive reform aimed at checking the power of special interests over the legislative and executive branches. Access to the ballot initiative suffers no harm from application of a simple health-and-safety filter to that channel of the democratic process. California might borrow a strategy from another state and thus prevent a more tangible harm to the engine of its legendary ethos and economic strength: our diversity.