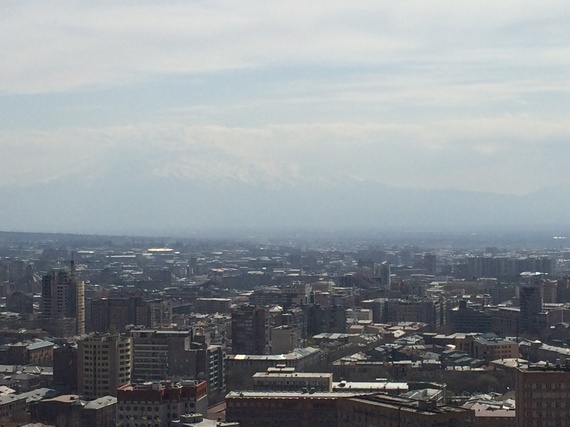 Yerevan is a surprising city. While it's history dates back to the 8th century B.C., the total population of Yerevan was still under 70,000 at the start of the Soviet era. With this nearly blank canvas to work with, Soviet architect Alexander Tamanyan went to work on the new capital of the Armenian Soviet Socialist Republic, hoping to create a Neoclassical jewel modeled after the great capitals of Western Europe.

While you are unlikely to confuse Yerevan with Paris, Tamanyan's plans were successful in making Yerevan a city that is quite distinct from many of the grey, monolithic ex-Soviet cities that litter the territory of the former USSR. There are wide, tree-lined avenues, one of which bears Tamanyan's name, scores of cafes with outdoor seating, expansive squares and many buildings in the Neoclassical style that have managed to skirt the recent trend towards tearing down the old in favor of taller, more modern buildings in the city center.

In exploring all that Yerevan has to offer, be prepared to venture outside the city center, and in some cases as far as 30-45 minutes outside of the city itself. The trip is worth it, and taxis are very affordable. You can hire a taxi for the day to run the full tourist gauntlet for around $30. If you're staying in the center, taxis are roughly $1.50 for a trip anywhere in Yerevan during the day and about $3 at night.

A good way to start your cultural immersion into Armenia, is to head outside the city to the Monastery of Geghard, which is a UNESCO heritage site. The Geghard complex, which dates back to the 4th century A.D., is also known as "the Monastery of the Cave," and is cut into the cliffs in the Azat River gorge. 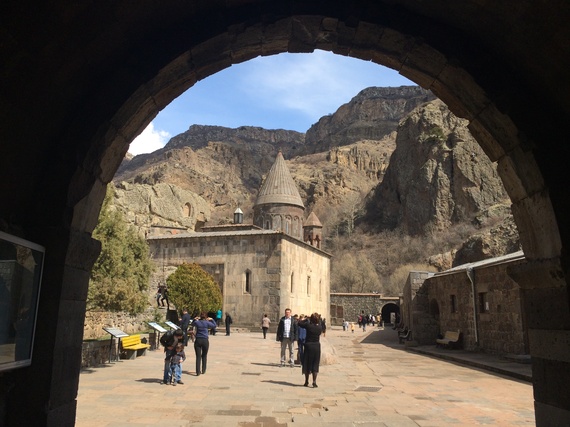 Ninety-seven percent of Armenians are Christian, and Geghard has been an important religious site dating back at least as far as the 13th century, when it was purported to have held many important relics, including the spear that wounded Christ on the cross. 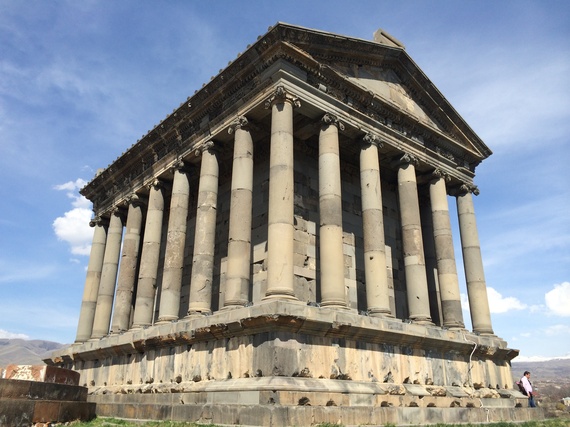 A short 15-minute drive from Geghard, is the town of Garni. Here you can reach back even further into history, with a visit to the eponymous temple. Work on the Garni temple began in the first century A.D. This Hellenic structure, which was funded by Emperor Nero, has been restored after being partially destroyed by invasions and earthquakes over the centuries. It is the only surviving pagan temple in the entirety of the former Soviet Union. 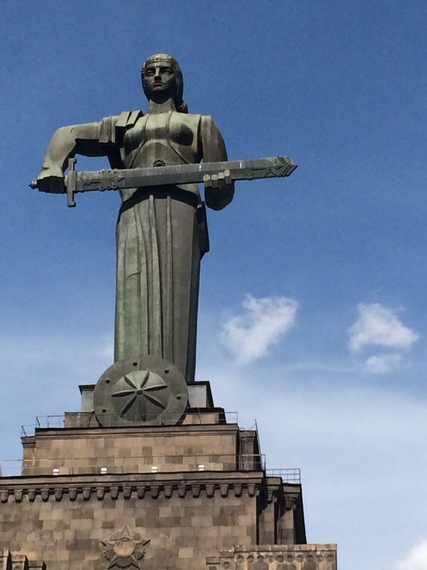 With a look into Armenian antiquity complete, your next stop on the way back to Yerevan should be Victory Park. Perched in the hills above Yerevan, Victory Park features a very dated Soviet style amusement park complete with a Pripyat-esque 1980's ferris wheel, old Soviet military hardware (tanks, SAM's and even a MiG), as well as a brilliant lookout point providing great views of the city, and on a clear day, Mt. Ararat. The highlight of Victory Park however, is the 21-meter tall hammered copper Mother Armenia Statue, set atop a 30-meter high basalt base. Similar in style to the Rodina Mat in Kiev, or the Kartlis Deda in Tbilisi, Mother Armenia is said to be the female embodiment of Armenia. The statue was originally displayed on a temporary base, until it was moved to Victory Park when the Armenian Communist Party chose to remove a statue of Joseph Stalin in the 1960's. 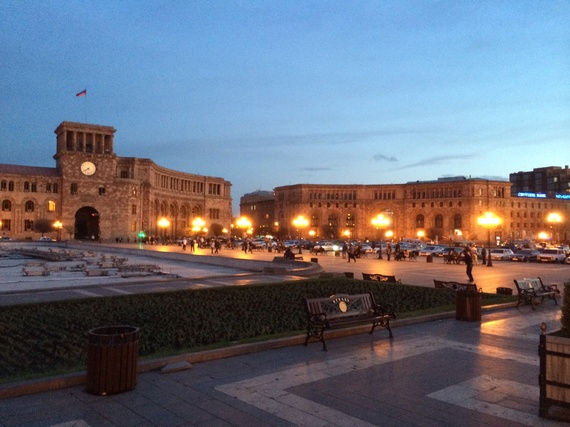 Back in "Kentron," the city center, Republic Square is not to be missed. Formerly known as Lenin Square, this "square" is actually an oval that was designed by Tamanyan to resemble a traditional Armenian rug when viewed from above. The square is ringed by the National Gallery, National History Museum and several government buildings. If you visit Armenia in the summer months, be sure to return to Republic Square after dark to see the "dancing fountains," a choreographed water show synched with lights and music.

Tamanyan envisioned Yerevan as a city with two centers, the main center being Republic Square, and the second, smaller center located around the Opera House. Northern Avenue is the pedestrian way linking these two focal points, and while strolling between them, you can find high end shopping, cafes and some of Yerevan's finest restaurants. 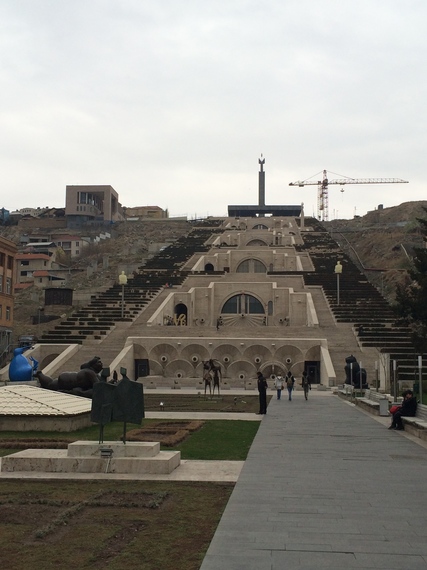 Perhaps the most impressive tourist attraction in the city center is the Cascade. Construction on this massive undertaking began in 1971, and it was not completed until 2009. The Cascade is a Soviet-sized stairway that links the city center to the hilltop neighborhood of Monument, where Victory Park is located. It is possible to make the ascent outside, climbing the stairs and stopping to view the various sculptures located in the courtyards at each level. Alternatively, you can choose to enter the Cascade and ride a series of escalators, reminiscent of Hong Kong's Central-Mid-Levels Escalator, and stop on each level to view a rotating series of art exhibitions varying from vintage furniture, to traditional murals depicting the history of Armenia.

After taking in all the sights Kentron has to offer and sampling some Armenian cuisine, it's necessary to once again venture further afield to see the rest of the major attractions.

The Armenian Genocide Memorial Complex houses both the Armenian Genocide Museum, and the Tsitsernakaberd Genocide Memorial. The museum, which is less than ten minutes taxi ride from Republic Square offers an account of the 1915 genocide in which as many as 1.5 million Armenians perished while Armenia was part of the Ottoman Empire. The memory of this genocide still colors relations in the region and plays an important part in understanding Armenia's history, as well as it's current dealings with it's neighbors. 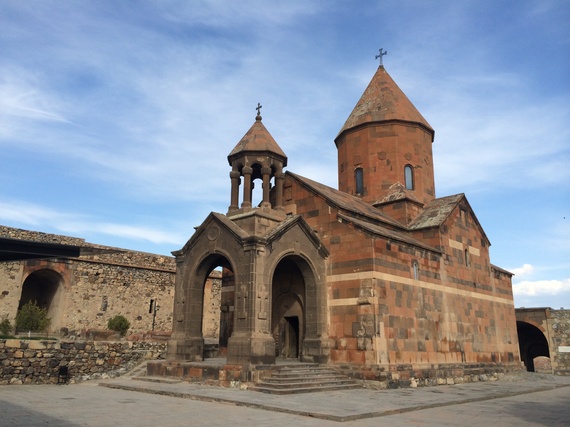 The final stop is the Khor Virap Monastery, located 20 miles South of Yerevan, and less than 500 yards from the Armenian-Turkish border. Construction of the still functioning church began in 642 A.D. and aside from viewing the Monastery, it's vantage point on a hilltop in Pokr Vedi affords unparalleled views of nearby Mt. Ararat just across the Turkish border.

In addition to these tourist sights, make sure to leave some time to wander leisurely around the city center, sit outside at a café, and most importantly reach out to some of the locals.

What are your favorite attractions in Yerevan? Let us know in the comments.