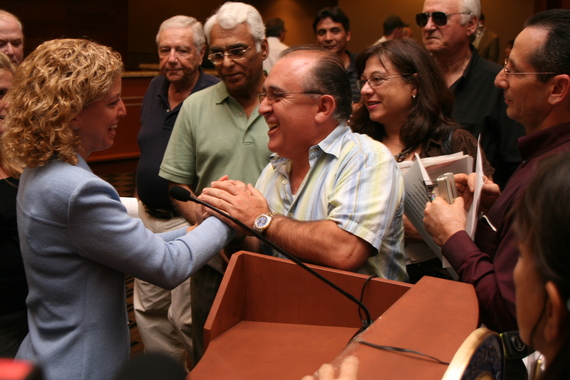 Debbie Wasserman Schultz has a high profile leadership role in this election. Therefore, she is fair game for being attacked on virtually every action she takes.

This is what I know about Debbie Wasserman Schultz.

There is nobody in the United States of America who works harder than she does. Debbie manages to juggle two full-time jobs--U.S. Representative from Florida's 23rd District and chair of the Democratic National Committee--and does them well.

Debbie finds time to be a great mom to her three children and wife to her husband of 23 years. Her intense devotion to her family and personal understanding of the difficulties working moms face make her one of the best advocates in Congress for families and children.

I know that Debbie has given her life to public service. When Debbie won her race to join the Florida state legislature in 1992, she became the youngest woman to ever be elected to the body. To win that race, she worked her heart out knocking on doors across her district. That tenacity and dedication to her constituents didn't change when she was elected to the State Senate or when she became a member of the U.S. House of Representatives.

I know that when women need an advocate - it's Debbie Wasserman Schultz who is ready to stand by them. She's one of the most vocal opponents of the Right's "War on Women." She's been a staunch advocate for women's reproductive rights. She also supports full funding for the Violence Against Women Act and has had two of her bills aimed at increasing the rights of domestic abuse survivors signed into law. What's more, Debbie is a champion of the women's economic agenda, which includes equal pay and paid family leave.

I also know that Debbie Wasserman Schultz is a breast cancer survivor, who endured seven major surgeries during her treatment for the disease, while still raising her children and fulfilling all of her duties as a congresswoman. That experience has made her one of the fiercest advocates for cancer research. She's also been a leader on cancer legislation like the Education and Awareness Requires Learning Young Act (EARLY), which ensures young women have the knowledge and resources necessary to make educated decisions about their breast health. In addition, she's one of the most ardent supporters of The Affordable Care Act, which ensures that more Americans have access to quality, affordable healthcare.

Debbie is someone whose record speaks for itself.

That's why I took personal offense when Bernie Sanders decided to go after her recently, remarking that she is not the DNC chair the party needs and if he's elected president, he will not reappoint her to the position. Then, he took it a step further and endorsed Wasserman Schultz's Democratic primary opponent, a white man who does not have even close to the credentials she does.

Congresswoman Debbie Wasserman Schultz is a loyal public servant with decades of experience and numerous legislative accomplishments. She deserves our respect. Let's remember all of this before we start demonizing her - particularly since she's one of the few women we have at the top. What's happening to Debbie is something we've seen over and over with women who come into political power. It happened to Nancy Pelosi when she was Speaker of the House. It's happening to Hillary Clinton. Now, it's happening to Debbie Wasserman Schultz too.