Greeted by a standing ovation, His Highness Prince Karim Aga Khan, Shi'a Imam of the world's Ismaili Muslim population addressed a joint session of Canadian Parliament on Thursday, February 27, 2014. The sub-zero temperatures and intermittent snowflakes weren't enough to stop members of the House of Commons and the Senate from listening to the reflective advice of the celebrated Muslim leader who also heads one of the world's largest private, international development agencies. 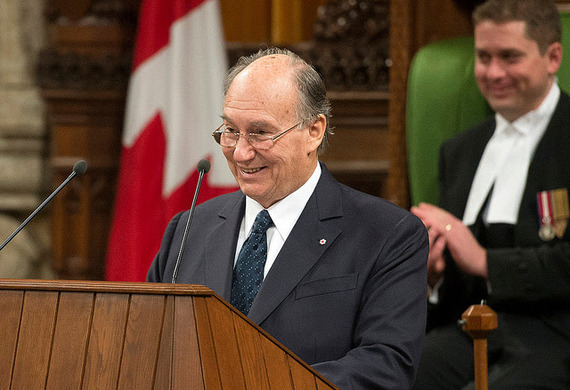 His Highness the Aga Khan, hereditary Imam of the Nizari branch of the Shi'a Ismailis, addressing the Joint Session of Canadian Parliament

This is only the third time since 1941, when these joint sessions began, that a non-sitting head of state has been accorded this honor and the only time a faith leader has addressed both houses of Canadian Parliament. Being Imam of the Ismailis, a position he inherited from his grandfather in 1957 at the age of 20, is a responsibility that has entailed providing spiritual guidance to his followers, a transnational community scattered over many countries, including Canada. The majority, however, still live in the developing world, including amongst them, the fragile democracies of Afghanistan, Pakistan and Tajikistan and a number of the countries that straddle the Eastern African coast and interior of the continent. In all of these countries, the Imam is able to realize his second mandate -- to improve the quality of life of the community which he guides, but also the broader societies to which they belong, regardless of faith or ethnicity. Much of the latter is done through a non-denominational set of agencies based in Geneva known as the Aga Khan Development Network, which since its inception more than 30 years ago has set up hospitals, primary and secondary schools and universities amongst the most vulnerable populations and in some of the most socially and politically delicate regions of the world. 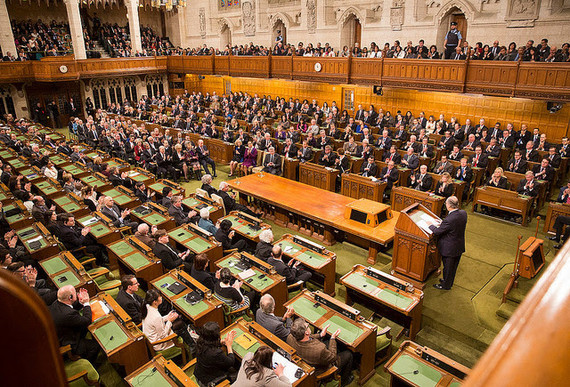 The Ismaili Imamat and the Government of Canada have had a long standing relationship of mutual respect and admiration. On the occasion of foundation ceremony of the soon-to-be-opened Ismaili Center Toronto, The Aga Khan Museum and their Park in 2010, the then-74-year-old Aga Khan was awarded Canada's fifth ever honorary citizenship following in the footsteps of other humanitarians such as Nelson Mandela and the Dalai Lama. 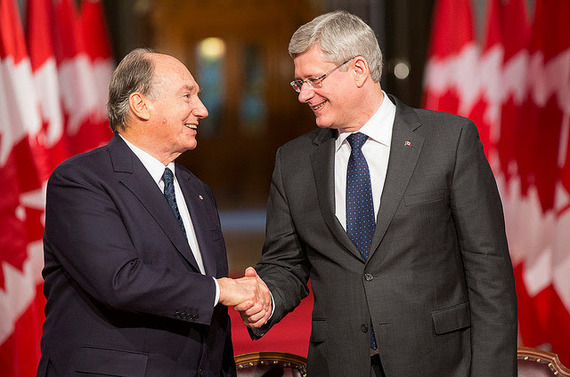 The Right Honorable Stephen Harper, Prime Minister of Canada and His Highness the Aga Khan

The Aga Khan, alternating between English and French, had much to say to the gathered audience and the thousands more who watched the event online and on television. Among them, he recognized the increasing move towards constitutional reform, acknowledging that 37 countries had adopted new constitutions in the last ten years and a further twelve were in the process of updating their existing frameworks; a number which amassed to more than a quarter of world's nation-states. He noted that one of the most successful amongst these was Tunisia, a small Muslim-majority country in Mediterranean North Africa, who in consultation with the Portuguese, were able to enshrine the importance of civil society institutions as an essential element of democratic strength.

The Shi'a Imam spoke about the increased conflict that characterized our world, the tensions between Sunni and Shi'a interpretations of Islam and that pluralism -- an ethic in which diversity, not just in its spirit, but in practice -- needed to be valued and championed. However, he also noted that pluralism was a process, rather than an end-point that one arrived at, a mantra which has become one of the working points of the Global Centre for Pluralism, a joint venture between the Ismaili Imamat and the Government of Canada on whose board sit the likes of former UN Secretary Kofi Annan and the former Vice-President of Guatemala, Eduardo Stein. Despite these challenges, the Aga Khan, wavering between optimism and realism, believes there is still a way to transform "countries of conflict" into "countries of opportunity," a long but necessary journey which would involve consultation with all parties and the participation of diverse voices -- not just those in advantageous positions of power.

Many of these conflicts today are taking place in countries where Muslims live, but this is not a problem exclusive to a single faith community or model of political governance. "Muslims today have differing views on many questions," said the Aga Khan. However, it is dangerous to equate "what is highly abnormal in the Islamic world" with something that is an innate characteristic of the worldview of 1.6 billion Muslims. Rather, the community of believers, the ummah, that comprise the Muslim world are the standard-bearers of an immense diversity, a feature which has been an essential and defining part of its complexion from its early years in the Arabian Peninsula.

One value, however, that has tied together many Muslim societies historically, he argued, was an emphasis on the pursuit of excellence and knowledge. This principle was formalized and became part of state policy in dynasties as diverse as the Abbasids and the Ottomans, the Mughals and the Fatimids, the historic civilizations of Mali and Andalusia, and it was amongst these very groups and governments that the use of the intellect for the betterment of society was actively encouraged. The result of those pursuits were magnificent civilizations that excelled in the arts, in literature and in technology.

Just as he began his speech invoking the name of God, the Muslim leader also ended with a translated verse from the Qur'an which extolled our common humanity: "O Mankind, fear your Lord, who created you of a single soul, and from it created its mate, and from the pair of them scattered abroad many men and women..."

To this, he added: "I know of no more beautiful expression about the unity of our human race -- born indeed from a single soul."

The video of the speech can be found here. The full-text is located here.