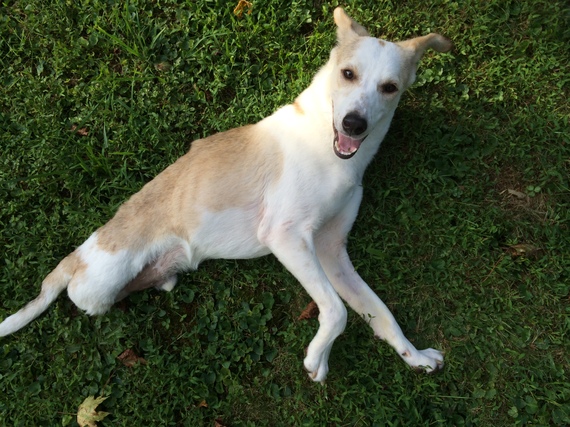 My dog's story starts over a year ago on the outskirts of Cairo. He is a baladi, an Egyptian street dog. He was hit by a car, losing the use of his hind quarters and legs. Injured and dragging his back end around in the grime of the streets, he was ignored and left to fend for himself.

After two months, a volunteer at an animal welfare group was alerted by a caring friend. This beautiful woman, Marwa, searched for him for over an hour. She found him -- "in the garbage, totally paralyzed, his back legs were dead because of gangrene, full of mange and dirt, totally blind, poop and garbage were stuck on his body," she later told me. "It was one of the worst cases I have ever seen in my life and I have seen a lot." Discovering that he was a "real fighter," she sought veterinary care. Saving his life, she saw him through amputation surgery for his back legs and three months of rehabilitation. She grew to love him, but felt that the best care for him would be elsewhere.

She named him Lucky. 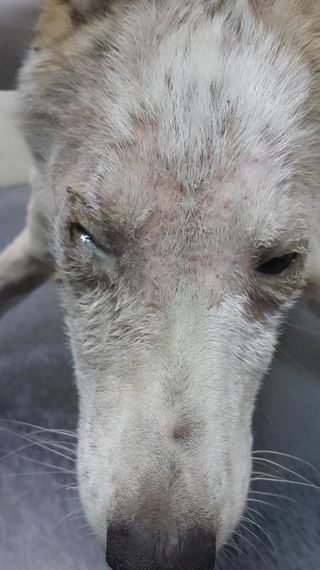 Arrangements were made to have him transported to New York with the help of an American nonprofit organization, Special Needs Animal Rescue and Rehabilitation (SNARR), whose mission is to "give hope to the hopeless." After arriving in New York, Lucky started his long journey to Kansas where he would receive foster care. Dozens of volunteers drove legs (no pun), each taking a 60 or 90 minute section of the trip. It was about this time that I stumbled upon his story on SNARR's Facebook page. I had previously seen a viral video of another dog with no hind legs running on the beach and was impressed by how resilient and happy he was. I knew I wanted to adopt Lucky to give him a chance at running joyfully and playfully, too. I immediately sent in an adoption application.

Lucky needed time to heal and he received excellent care in Kansas. I did not hear much from the folks at SNARR regarding my application, but I watched his progress online and was amazed by his pluck and stamina. I watched from afar as he received a custom-built wheeled cart to make it easier for him to walk.

One day, I received a short phone call informing me that my adoption application had been approved. Another chain of drivers was being arranged and he would be at my home before Labor Day.

One of my other dogs, Cyrus, is also two-legged -- he has back legs and no front legs. Over the years, I have adopted other special needs dogs. Despite all my experience, I had no idea how to prepare for Lucky's arrival. How injured was he? Did he have any use of his back end? How did he relieve himself? Could he wag his tail?

Late one night, Lucky arrived with the final driver. I was immediately struck by how lively he is. A puppy's energy. I was unprepared for how he moved. Without wheels, he can run quickly on his two remaining legs, carrying his back end around like a knapsack flung over his shoulders. He does not drag the back end on the floor; rather, he lifts it up in an amazing balancing act. Nothing slows him down. 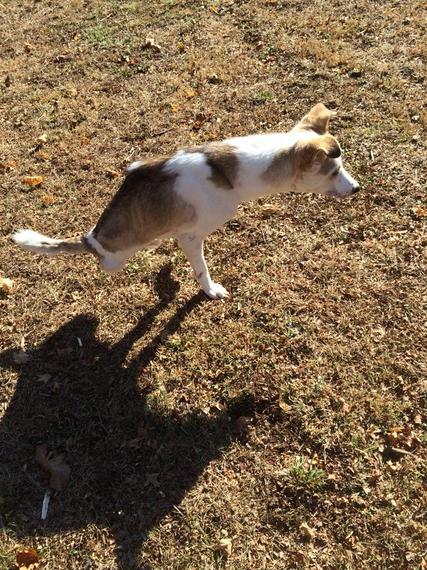 The driver said goodbye and, just like that, Lucky was part of our family. He and I bonded immediately and, within hours, he was following my every footstep.

As the first days progressed, there was trial and error in solving how best to care for him. He cannot relieve his bladder on his own. I needed to learn how to "express." I was told it was simple: Find the bladder and squeeze. Initially, I could not do it. Desperate, I went online and, to my surprise, I found a number of expressing instructional videos (who knew?). After viewing one particularly helpful video, I figured it out. Some friends were horrified that I would have to do this but, now that I have been doing it for months, it is no big deal. It is ... efficient.

Lucky fit in with the other dogs and cats in no time at all. He has settled in and is healthy and content. He is quirky and funny. He shows absolutely no signs of having a difficult past. Dogs, unlike most people, live in the present and do not look back.

Next month, Lucky will start therapy dog training so that he may bring inspiration to hospital patients who are going through difficult circumstances. His brother Cyrus is already a certified therapy dog who visits a children's hospital and an amputee clinic each week.

I am confident that Lucky will make a huge impact when he visits patients. He is already inspiring people online. He has his own Facebook page (started when he was in foster care) with 1500 "fans" from almost 50 different countries. We receive many kind messages from people who are encouraged and motivated by his story.

I received some flack when I adopted Lucky. Why, I was asked, would I adopt a dog from Egypt when there are so many other needy dogs right here at home? On some level, I understand the concern -- there are many deserving animals waiting in American shelters for homes. I have adopted many of them over the years. But Lucky's fate and mine are intertwined and, for whatever reason, our paths crossed. It was meant to be. Lucky has some larger purpose in life and I was chosen somehow to help him with his mission.

Lucky is more than a dog; he is a symbol. For some, he is a symbol of resilience and perseverance, a canine "It Gets Better" story. For others, he is an affirmation of life and hope. To me, he is the best of what it means to be a dog: remaining positive, living in the moment, providing unconditional love.