Days before her 7th birthday, my daughter asked for a bedtime story. And while I'll admit that I do try to make mine a bit more creative than a standard fairytale, I certainly hadn't planned in advance the adventure I chose that night. I've tried to recreate the story here, of course with a bit of embellishment, but the message is still the same.

"There was once a girl more beautiful than you could imagine, both inside and out. She wasn't a princess or a dancer or a popular singer; she was full of even more magic than that. She was curious, and read books whenever she could. She loved science, dinosaurs, animals and volcanoes. She rode her scooter on voyages (without leaving the yard) and created museum-worthy masterpieces with sidewalk chalk.

She did well in school, always giving the very best effort possible. She was respectful of her teachers, thoughtful with her friends and a good listener at home (most of the time). In her parent's eyes she was just perfect, and had been since the time she was merely a twinkle in their eye.

Then one day, things changed suddenly. The energy she exuded just wasn't the same. She was less of a page-turner, less of an inventor, less of herself. Soon the neighborhood kids came by less often. There were fewer requests for play dates, fewer trips to the local library, fewer adventures of any kind, really." 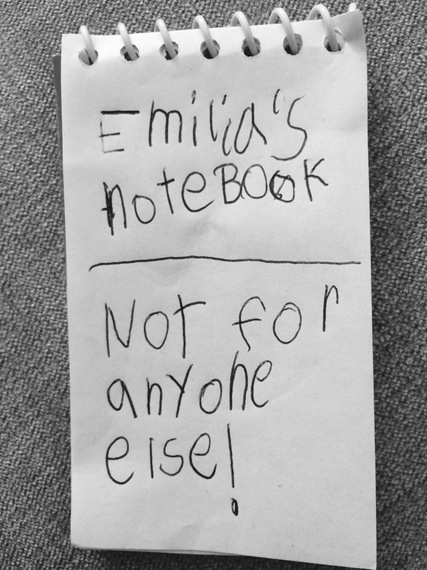 At this point, the story had clearly taken a turn. But once my mind caught back up with my mouth, and based on the events taking place at our home for the week prior, I realized exactly where my story was headed. And there was no turning back.

"See, a week or so earlier, the beautiful girl had picked something up and never put it down (or, so it seemed.) She rushed to get ready for school in the morning so she could have a few moments with it before heading out the door. She ate dinner with her family too quickly and sat on the edge of her seat waiting to be excused so she could have it some more. One time, her mother even found her pretending to be going to the bathroom so she could sit on the toilet and hold it without interruption.

At first, her parents had let her have at it. What harm could she really do? This was a phase, they assumed. And making a bigger deal about it or putting restrictions on it would only make her want it more. So they sat, waiting, and hoping the realization they wished for her would present itself on it's own. Sadly, it didn't."

At this point, my daughter was nearly asleep. Any other evening, I would have tucked her in, kissed her forehead, repeated the nightly prayer my mother recited over me one million times and softly crept out of the room before she heard me. But tonight, even I needed to know how this story ended. I continued.

"Before long, gone were the lights behind her eyes. Gone were the stories of what treasures she and a classmate had discovered in the yard during recess. And, gone were the scraps of paper her mother would find beside her bed stand that started with a warning that the pages were private, and ended with a sentence or drawing as curious as her.

So before going to bed that night, the mother of that beautiful girl made sure just one more thing was gone: the girl's iPad. And by morning, just like that, her magic was back."

Just like that. I know. That is where the "fairytale" part rings true.

I fear there will be times in the future when my daughters will lose a bit of themselves, and I may not be able to help them retrieve it. I also know that this story, though believed to be for my eldest, was just as much for me.

There are certainly times when magic can be created in an instant. But more often than not, it takes time and nurturing to cultivate something magical. So once we have it, it needs to be both cherished and protected. That way, if someday it leaves you forever, you will appreciate it all the more.

Karri-Leigh is a reality television producer, blogger and mother of two in Los Angeles. You can follow her adventures here.

More:
technologyparenting adviceParenting iPadParents
Newsletter Sign Up
Raise the kind of person you'd like to know
Subscribe to our parenting newsletter.
Successfully Subscribed!
Realness delivered to your inbox