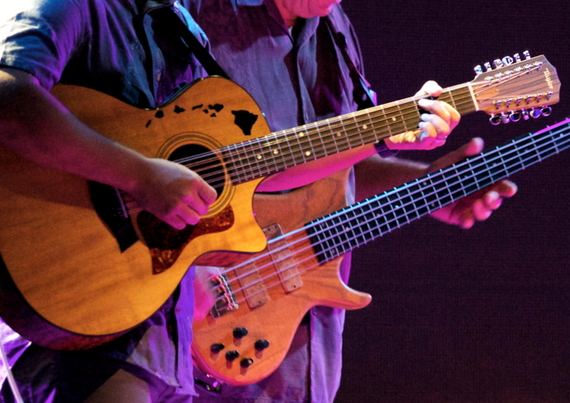 As an owner of Runnymede Capital Management, I usually write articles under Money so chalk this one up to The Third Metric. My avocation as a musician is my way of becoming more creative, productive and connected.

In a few days, I'll be performing at the 2015 Hawaiian Slack Key Guitar Festival -- specifically at the New Jersey and Virginia shows -- and it simply blows my mind. Seriously. I have been a fan of the festivals for at least 15 years having attended multiple shows on Oahu, Maui and Kauai. For over 30 years, the festivals have been THE place to spend a day watching all your idols play on a single stage.

I bought my first real six string, not at the five-and-dime but at Rondo Music on Route 22 in Union, New Jersey. It was the Summer of 1990. Less than a year later, I was playing electric guitar in SmackHead performing punk/hardcore, reggae and ska at Trinity College with band mates who would become lifelong friends. We had to keep upgrading to bigger, more powerful amplifiers just to keep up with Jason, the loudest drummer I've heard to this day. Those were great times.

By 1996, I was living and working in Boston. Because my wife was born and raised in Honolulu, I had found Hawaiian music. The Best of the Beamer Brothers, John Keawe and HAPA were playing on the compact disc player (remember those?) set to repeat. But seeing is believing and my first live show -- Raymond Kane, George Kahumoku, Jr. and Keola Beamer at the Somerville Theatre -- changed my guitar playing forever. I traded in my Marshall Stack for a Taylor acoustic guitar with koa back and sides. Maybe it was Keola's nahenahe guitar playing or George's masterful storytelling. Perhaps it was seeing Uncle Raymond's triumph of the human spirit -- the man performed beautifully despite needing the assistance of an oxygen tank to breathe due to severe emphysema. 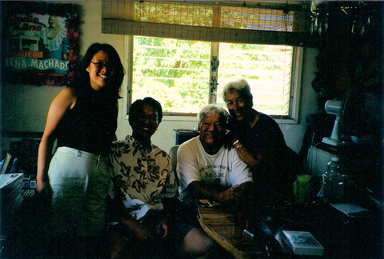 Visiting Uncle Raymond and Auntie Elodia at their home in 2001

In later years, I was blessed to spend time with and learn from all three masters that graced the stage that day. Not only can the music move you; but for fans, the musicians can be so accessible, nurturing, and encouraging. I'll forever cherish the memories of driving to Waiʻanae for a guitar lesson and lesson in aloha with Uncle Raymond and his wife Auntie Elodia. He was a role model and a mentor to generations. Like it was yesterday, I recall his booming "aloha" greeting upon pulling up to the big mango tree in front of his house and his "you one sly mongoose" when you played a passage just right. Just as Uncle Raymond had brought fish to his guitar teacher, I tried my best to bring a gift -- fresh vegetables from my mother-in-law's garden or a container of poi. A nod to tradition in modern times.

My plan was never to play on stage. From the comfort of my living room, my simple goal was to play my guitar, trying my best to emulate the guys (and gals too -- Cindy Combs and Owana Salazar!) who wowed me on stage. Over time, though, I have come to realize that the language of music dies in solitude and flourishes when shared. I am honored to be a part of the Hawaiian Slack Key Guitar Festival that I have enjoyed watching for so many years. I hope that I will do the masters proud. With slack key, they always say that whatever you do, just be sure to play from the heart. The music and stories pull at your heartstrings, and in my case, they still haven't let go.

Please come out to support the Hawaiian Slack Key Guitar Festivals this weekend in New Jersey, Virginia and New York. I hope to meet you before or after the show!

Find more from the author at the Runnymede Blog or www.andywangmusic.com.