In his prime, my father was a powerful man. He was the first military judge to wear a judicial robe, presiding over courts-martial across Europe. He had a strong body with a barrel chest and tanned skin from skiing the Alps and swimming in the Azores. My dad rose through the ranks of the Air Force while pursuing various hobbies and sports and helping my mom rear three headstrong children. I've never forgotten the day he told me he would rather be respected than loved. I pondered -- and often disagreed with -- that view for decades. 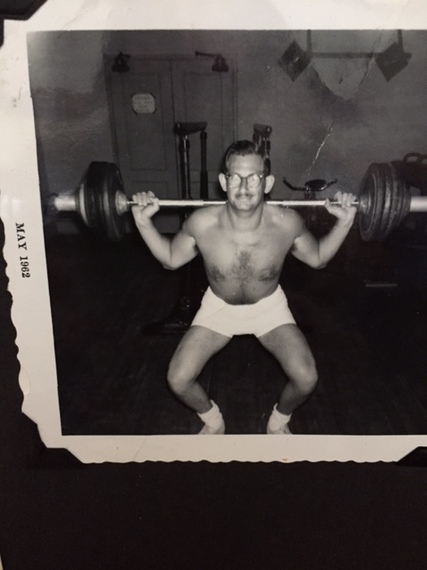 But my dad wasn't only known for his position in the community or the military. He was smart, incisive, and quick to argue his perspective. He wasn't what would be called an easygoing man, but he enjoyed his pipe, a glass of good wine, a pretty woman. I don't recall him cultivating many friends, but he certainly was well regarded and could hold his own in a conversation.

His prime ended about 25 years ago. My father is now 86 years old. When that number appears in the newspaper, most often in an obituary, many are quick to dismiss the person with a shake of a head. He lived a long life, many think. Or they assume the person is in the throes of dementia or confined to an assisted living home. That age seems to signify an ending. This is not the case with my father. 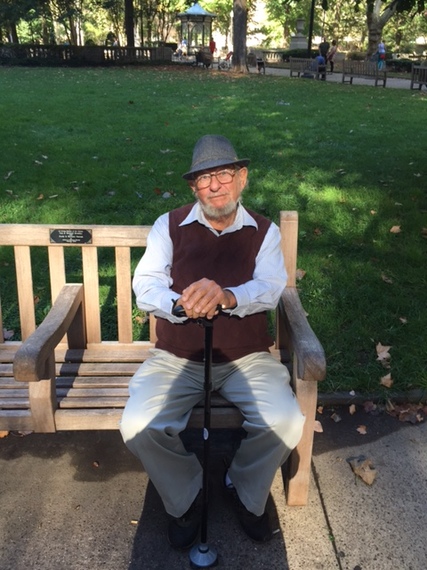 He is certainly diminished from the imposing man he was when I was younger. He looks frail now, with a head of white hair and hearing aids that only occasionally give him entry to the conversations taking place around him. But it is a mistake to write him off. He is still an avid reader who is outraged by those same things that outrage the rest of us -- poverty, war, intolerance. Of course, he looks at things through a lens most of us cannot -- remembering life during World War II and the Cold War and the Depression. His life experience provides a context for him to puzzle through the challenges of today. He recently pointed out that Donald Trump's expressions and words remind him of Mussolini.

Aging is meant to be a gradual process so we can become accustomed to each small indignity and loss before moving on to the next one. Some people accept the inevitable more gracefully than others. My father is not among that number. He rails at the ever-shrinking world of choices available to him. Until two years ago, he and my mom rode a tandem bike every morning through the streets of their small New Jersey town. Weakening leg muscles and loss of balance have made that impossible these days. A solo early morning bike ride a few months ago at the beach left my dad with blood streaming from his legs after a fall. The bikes have been retired to a corner of their garage.

Even his beloved kayaking has become a difficult and infrequent hobby. He is fine once the boat is on the water but getting it from the car to the water's edge is no longer an easy feat. But both of my parents still swim every day. They still enjoy dining out, even within the limited choices available to them in their corner of New Jersey. Both still pine for the excitement and dining of Capitol Hill, where they lived for 40 years. They greedily read days-old copies of The Washington Post and exclaim over the new restaurants and theaters.

Although my father's world is shrinking daily, he is still a vital force in it which is why I am saddened by how strangers see him. Yes, they have to raise their voices to be heard and sometimes have to steady him if he seems shaky. But the same man who once sat on the U.S. Court of Military Appeals is still there -- eager to engage and be engaged. Ask him what he thinks of the EU response to the current refugee crisis and you will get an earful, colored by the response to the refugee crisis after World War II. Sit with him for ten minutes and you will get an amazing assessment of the current crop of Republican presidential nominees.

What is lost as we age varies from person to person. In our struggles to accept our own inevitable decline, we too often assume that everything of value is taken from us after a certain age. So when we see gray-haired people leaning on canes there is little reason to do more than offer an arm to help them to the nearest bench. But oh what we might be missing! My father was always a difficult man, and he remains so. His impatience to live fully when he was younger is matched only by his anger at each small action that is being taken away by age. But at 86, he is a difficult and wise man who has so much to offer to those patient enough to ask or listen.

My 22-year-old daughter is captivated by his stories of World War II. He feeds her insatiable desire to hear about "the olden days" and he has hooked her on his Frank Sinatra albums. She never knew him when he was young and is perfectly satisfied by this older version of her grandfather. He, in turn, wept when she received her bat mitzvah as he saw his legacy passing to another generation. Their relationship has always been so sweet.

I know how fortunate I am to have parents who are relatively healthy, financially independent, and happy as they enter their mid-80s. They still watch the evening news and make weekly visits to the library because they want to remain active participants in the world around them... even as it grows ever more complicated.

The Baby Boomer Generation, of which I am a part, is now entering our senior citizen years. There is no need for us to redefine it. The same principles will continue to exist: While our bodies may deteriorate, many of us will retain the wisdom, experience, and intellect that we carried through our lives. Even if you have to speak louder or repeat yourself, try engaging with us.

And if you see a white-haired man walking slowly toward Applebee's in southern New Jersey, take a chance and ask him what he thinks of Donald Trump. You will get an earful.