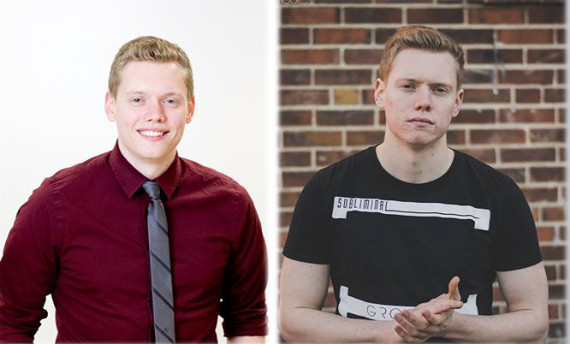 I have been living a double life. Not the kind where I am secretly hiding another family in a different state from my wife, but it feels that way. Some people know me as a high school teacher at a small town school. I am positive, work hard, maintain a professional appearance, make connections to students and colleagues and try to make a difference every day in the lives of kids. On the other hand, some people know me as something entirely different.

For the last seven years I have also been the founder, guitarist and producer for the progressive metal act The Room Colored Charlatan. I know that's a weird band name, but then again for most people, it is weird music. The people that know me in this sphere of my life have watched me perform heavy aggressive music, with screaming vocals and a crowd that is in danger of hospital visits if they don't calm down.

You can listen to my weird metal music here

These two worlds are seemingly so incompatible that people genuinely don't know how to respond when they find out that I am a teacher that plays metal. It does not fit into the cultural meme of the population's perception of a public educator. Imagine how you would react if you saw your local priest drive by while having NWA's F*** The Police blaring on the radio. It's that type of reaction.

Now, before I go any further I will answer the burning question in your mind. "How vain does this guy need to be to write an entire article about himself?"

Now with my character description out of the way, I want to share with you a moment when these two divergent worlds of my life have recently intersected. As I was working at the graduation ceremony this year, a parent came up to speak with me. Except it wasn't about their child or school, it was about the new album my band had just released! This parent is a fan. In fact he had come to parent teacher conferences earlier in the year to quote "meet me". We need more parents like this guy. While this was slightly out of the ordinary, I didn't think much of it. However, no more than twenty five minutes later two younger gentlemen I have never met approach me and ask if I am in fact Justin Seymour. I said "yes", and they responded by showing me my album on their phone asking "are you responsible for this?" I again said yes.

We began to talk, and I discovered they had family attending the graduation and they are also fans, but they asked me the question that always comes up. "How did you get this gig?" By "gig" he meant, how does a guy in a metal band like yours end up being a teacher? I respond with my usual quick wit and heavy sarcasm (I said I was vain), "with teacher shortages all across America they are basically letting anyone in these days."

However, it felt very strange to have both of these different aspects of my life converging at the same time. I think the reason for this obscure feeling is because I have, in many ways, intentionally divorced the two worlds and tried to keep them as separated as possible. One side being my intellectual and professional life while the other is my raw, emotional and artistic outlet. It felt awkward to discuss my music while wearing a suit and tie, because when people are usually asking me about my music I am drenched in sweat after just having performed a forty minute set.

But, I think the biggest reason it felt out of place is because in some ways I try to keep it a secret and I think many people can relate to that. Many people keep one sphere of their life a secret from another sphere. Maybe you keep your tattoos or piercings a secret from your church or religious family members. Perhaps you don't tell you colleagues that you have secretly been trying to become a writer. Maybe you like anime and don't have the courage to tell to anyone what your REAL favorite show is because people might think it's weird.

I think so many of us are a part of a subculture that doesn't exactly seem to fit into the mold of our mainstream work life and we are often afraid to be our full selves in that context. What this incident showed me is that, if anything, perhaps I should try to bring more of myself and my subculture passions to the mainstream environment in which I teach. So, I have created what I call my "band of the week". Every week I pick a new band to share with my students. During work time, or any down time I will play some music from a band that most of my students have never heard. I think it is important for creating open minds to expose people to something they may otherwise never experience; they may just realize it's not so bad after all.

Tell me in the comments what spheres of your life you keep separated and why!

Also being part of a metal subculture as a teacher can also make me feel a bit weird and alienated, but I know I can't be the only teacher that enjoys or plays heavy music. So I have started a new community on Facebook where teachers that like or play heavy music can join and discuss our passion for education and music!