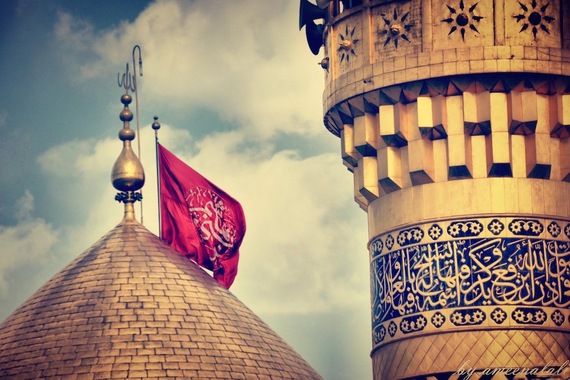 Ashura, the tenth day of the month of Muharram in the Islamic calendar. A time of rejoicing and deliverance, yet a time of grief and sorrow. From both the Sunni and Shi'a traditions, this day holds very significant to many.

In the Sunni tradition it is widely known that we fast on this day to show gratitude to God and champion the day Moses and the Children of Israel were saved from the tyrannical rule of Pharoah as was narrated from Prophet Muhammad (pbuh). While in Shiite tradition it is known to be a day of mourning and sorrow in which they commemorate and lament over the tragedy and massacre of Karbala when Hussain, grandson of Prophet Muhammad (pbuh), was brutally killed along with members of his family and his companions. This was due to Hussain's refusal to pledge allegiance to Yazid, the caliph of the time, as he was seen by many as an unjust ruler.

On the day of Ashura, as I participated in the annual fast, I also remembered the tragedy of Karbala and the killing of Hussain. Although seen as extremely significant, and almost even central in Shiite tradition, Hussain and the rest of the Ahlel Bayt (family of Prophet Muhammad) do in fact hold a very special place in my heart. As someone who ascribes himself to the Sunni tradition, loving Hussain and rest of the Ahlel Bayt is not contradictory, but rather an integral aspect of my faith. Due to the frequent affiliation of the Ahlel Bayt within Shiite tradition some, from both Sunnis and Shiites, perhaps might see this as an anomaly or an oxymoron, yet for me it is simply another manifestation of being a Sunni just as loving the companions of Prophet Muhammad (pbuh) is. Being a Sunni and loving the Ahlel Bayt are not mutually exclusive. Just as many people may automatically attribute Jesus with Christianity, so too will many attribute Hussain and the Ahlel Bayt with Shiite tradition only, however, that should not be the case.

I may not participate in the self-flagellation and lamentation over the killing of Hussain as practiced by Shiites, yet my love for him is ever so strong. Hussain, to me, is a beacon of love. Hussain, to me, is an extension of Prophet Muhammad's (pbuh) wisdom, justice and mercy. Hussain represents one of the Salaf, the righteous predecessors. Just like the Sahaba, or companions of Prophet Muhammad (pbuh), Hussain is a well that never runs dry and a light that never extinguishes. To me, Hussain and the Ahlel Bayt are to be championed much like the companions of Prophet Muhammad (pbuh) and there is no contradiction in doing so.

Although many Sunnis are very well versed in the lives of the Sahaba, I have also noticed many Sunnis either lack knowledge or are apathetic with regards to Hussain and the Ahlel Bayt unfortunately. As Hussain plays an important role in Islamic history, it is saddening knowing that some Sunnis are oblivious of him and how much Prophet Muhammad (pbuh) displayed his love for him. In various narrations within the Sunni tradition Prophet Muhammad (pbuh) was informed by the angel Gabriel about the slaughter of Hussain and mourned over the tragedy. My message for fellow Sunni Muslims is that it is vital and very crucial that we study the lives of the Ahlel Bayt so as not to allow others to monopolize their role within their respective traditions. Learn about Hussain and allow your love for him to manifest.

When we commemorate Ashura and remember the tragedy of Karbala, we are reflecting on our own history, as Sunni Muslims. We mourn and we grieve and we do so in our own way. This was the grandson of our beloved Prophet, an imam of the Muslims and the leader of the youth of Paradise. The blood of Hussain, the cries of Zainab and Ruqayah, and the thirst of Abbas ibn Ali are integral to Sunni tradition and Sunni history. Let us not overlook this event and let us come to an understanding and a love for Hussain and the Ahlel Bayt.

Hussain's massacre is our massacre. Hussain's Karbala is our Karbala. Hussain's Ashura is our Ashura.