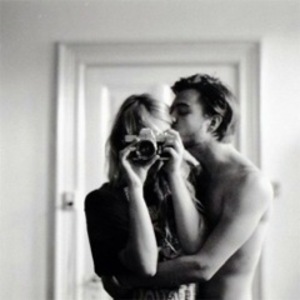 I am 23 years old and am considered the grandma of my peers. Not because I love to knit or because I'd choose a good book over a loud club any night, but because I like doing things in an old-fashioned way. I refuse to read on a kindle even though I know it's better for the environment. I still carry around a notebook even though I have an iPhone. But most of all, the thing that really sets me apart from everyone else my age is my view on romance.

What can I say? I'm a romantic. I want to meet someone the old-fashioned way: Our eyes meet across the bar, he makes his way over to me, looks into my eyes and says, "You're the most beautiful person I've ever seen". Then we fall madly in love. Unfortunately I don't live in a black and white movie from the 50s. So I have to be more realistic: He's wasted, spills his drink on me and slurs some apology, which I find funny because I'm also pretty drunk myself. He asks for my number. I'm too nice and awkward to say no so I give it to him. The next day I have no memory of him whatsoever when he texts me. And thus begins a modern 21st century romance. Done the old fashioned way.

I recently moved home with my parents to the suburbs of New Jersey. A week ago, I was arguing with a friend about my meet-in-person, archaic approach to dating as I got into bed at 9:00. My friend, an avid online dater user, begged me to try Tinder. "Just for a week", he said, "If you don't like it, delete it." I refused. Despite the OkCupid profiles I've helped write, the grouper dates I've crashed and the tinder chats I've helped analyze, I still had yet to try any form of online dating. While I thought it was great for other people, it wasn't for me.

But as I lay in my childhood bed and watched Full House on Nick At Night, I decided I had nothing to lose. I would act my age for once and see what happened. My mind started wandering. Maybe I could meet my soul mate. One of my close friends met her boyfriend on Tinder. He's good looking and has yet to murder any of us. These days, I'd say that's a win.

I signed onto Tinder, ready to meet the man of my dreams. I sat and sifted through countless people, carefully examining their photos and mutual friends. I felt like I was scrolling through a catalog. It's like online shopping, but this time it's not dresses or sweaters, but men. You get so used to clicking no that sometimes you accidentally pass on a good one. There's a metaphor for you.

The thing about this app is that it is inherently superficial. I find myself judging not only how these guys look but also the type of picture they have. If it's of him taking a selfie in the bathroom mirror, after feeling somehow violated, I pass. In one of my first chats, the guy asked where I was and if I wanted to meet up with him that night. Let me guess what he is looking for... a romantic candlelit dinner?

There seems to be three ways to use Tinder. The first is as pure entertainment where you rank people based on their looks, a la Hot Or Not.

The second function of Tinder is to use it to meet girls to "f***". I use that word intentionally: one night of fun, no emotions, no strings attached. Some of the guys on the site aren't even trying to hide their intentions:

"Looking for something casual in NYC"

Do people respond to that? I'm actually curious. Is any girl like 'yeah, f*** me and never call me again!' I'd be curious how many matches he gets though.

"Brazilian boy looking for fun :)... isn't that what tinder is for?"
Accompanied by a naked full body shot. Oddly enough, I respect this guy. At least he's putting himself in the same position he expects from others

The third purpose is dating. I could be naïve but it seemed like a lot of the guys on this site were looking for more than just sex. Maybe I'm commitment phobic and don't know how to express emotion but these guys immediately seem desperate and borderline pathetic to me.

A few of my favorite About Me sections include:

"tattooed teddy bear looking for a snuggle buddy... give me a chance to make you smile."
Smiling, no. Vomiting from your obvious desperation, possibly.

The closest I got to my modern day love story was this one guy, who I'll call Kevin. Kevin was funny and we immediately hit it off. And by hit it off, I mean we started chatting and didn't stop. Before I knew it, we were texting. I know where he's from, where he went to school, what he does, etc. He'd send me selfies of him and vice versa. It was getting pretty serious. Could this be the modern-day-love-story of my dreams? But then, it happened. Kevin called me. If anything, it was weird that we hadn't actually spoken yet. But when I picked up that phone, I instantly knew. It was never going to happen. There's a certain feeling you get when you hear someone's voice. And with this one, no go. I felt bad! Granted we hadn't met, but by all 21st century standards, we were friends. And now, with no sane way to explain it, I knew there was no spark between us; this was going nowhere. (Sorry you had to find out this way, Kevin.)

Chemistry between two people is more than just interests matching up and thinking the other person is cute. It's biological. It's a look: eyes meeting across the bar, a touch: him taking your hand to lead you through the crowded bar, a sound: hearing his voice as he screams in your ear because the venue is so loud (or just, you know, having a normal conversation), a scent: smelling him as he stands next to you (subconsciously this is always happening... it's when you notice it when it's a problem) or a taste (for the sluttier and drunker of the bunch) that lets you know if there is a real connection.

I think Tinder is great for people looking for something. Whether that something is the entertainment of the app, some casual sex or a relationship, Tinder is a great way to find it. But for me, I prefer the spontaneity of life. Using this app just made everything seem very forced, borderline desperate. When it comes to romance, I prefer leaving things to fate. Even if that means I'm single at 23 and living with my parents. So call me a grandma, ancient and outdated if you want. But after trying out Tinder and attempting to act my own age for once, I still prefer to do things in that good-old-fashioned way.