In less than a week, my baby boy will have his head cut open from ear to ear. And I am terrified.

Here's the thing... a week after having my son, I knew that being a new mother was the most painfully blissful experience possible. Still aching from my neck to my thighs (a 32-hour labor and delivery will do that), my new, sole reason for existing was to keep this little person alive. A month earlier, when I went on maternity leave from NBC, this sounded easy-peasy. And on paper, it was. Feed, change, let sleep. But oh, the emotional pressure. The oh-my-God-is-he-still-breathing panic that forced me to put a hand on his chest every 20 minutes at night. I was more than a little (a lottle) concerned about protecting him. I was having daymares of slipping down the stairs while holding him, landing exactly wrong on my eight pound miracle... afraid I might not wake up in time when he needed me in the middle of the night, thus losing his trust forever and dooming him to a life of solitude and a really loud motorcycle.

Two months in, I'd managed to chill enough to get five consecutive hours of sleep a night, and with the new "no socks while holding baby" rule, I was no longer picturing my son as a pancake. Broxon had a set schedule, loved when we read to him, aced tummy time on the reg, and his smiles outweighed his cries by a good 50 to 1 margin. We've nailed this parenting thing, we thought. High five! And then...

At his two-month checkup, the pediatrician suggested we take him to a neurologist because his head shape was concerning. We assumed that his narrow head was normal -- I mean, he did have a pretty tight squeeze into this world -- and we were previously told that it would probably correct itself. Notsomuch. The best pediatric neurosurgeon in Los Angeles confirmed: "Your son has craniosynostosis and will need to undergo surgery." 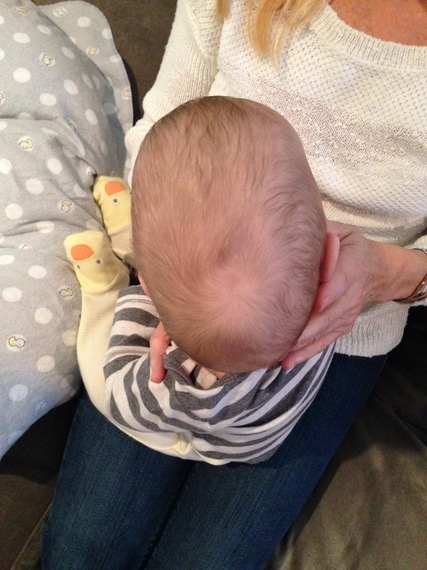 Now, while Google is an amazing addition to the world when you want to know how "You just put your pickle on everybody's plate college boy..." ends, it is also a fear-inducing never-ending source of medical nightmares. And when you first learn a condition's term, like craniosynostosis, and you Google it, it's petrifying. Go ahead, Google it, and throw in Images just for kicks. See?

So here I sit, my little 3-month-old soundly sleeping upstairs without a single suspicion that soon his head will be cut with a zigzag incision, and the majority of his skull will be removed and reshaped. He will be under anesthesia for hours, and will receive two to three blood transfusions. The scar will mark him for the rest of his life. But scars are cool, especially on boys, and his hair should hide most of that anyway. It's the other stuff that his hair can't cover.

How will he make sense of waking up to strange faces, in incredible pain? Will he lose his smiley, blind trust in me and his father, when he sees that we're right there with him in this cold, bright place, and we can do nothing to comfort him? What kind of panic will set in when his head and face swell up so much that his eyes won't open, and he's essentially blind? "Why is this happening to me, and if I can hear mommy, why isn't she doing anything to help me?"

Of course we've read dozens of stories with the Babies Bounce Back So Quickly theme. We've heard the online sigh of relief once the ordeal is behind those families, and that does help. Physically and developmentally, Brox should (fingers, toes and all dangling things crossed) remain right on track and not be affected by this debacle. But it's the unquantifiable effects that most worry me.

I guess this is what it is to be a mother.

US Presidential Election 2020
Breaking news, analysis and the latest polls on the presidential race from HuffPost’s politics team
See More
Voting Made Easy
Register to vote and apply for an absentee ballot today
Register now
More:
children's hospital los angelescraniosynostosisPlastic SurgeryParenting Parents
Newsletter Sign Up
Raise the kind of person you'd like to know
Subscribe to our parenting newsletter.
Successfully Subscribed!
Realness delivered to your inbox

Producer of TV and children