That's what I thought when I flopped into my childhood bed on Tuesday night, surrounded by stuffed animals and unwashed clothing.

My flight from Texas had been long, but I was home in Virginia. I could not wait to see everyone after my extended studying hell pre bar examination. I needed to remind Alison and her boyfriend Chris that they were coming up to stay at my house overnight on Saturday, I needed to call my doctor, I needed to actually move my stuff out of my parent's house.

I was tired though. I'd call everyone tomorrow.

I woke up twice on Wednesday morning. Once around 6 a.m., and again around 8:30 a.m. The second time, my phone's alarm would not stop buzzing. That, and I had eight missed calls and 22 text messages.

The first text on the screen was from one of my old roommates, "Have you seen CNN?"

I mechanically uploaded my phone's browser to CNN. Why not?

Breaking: Two reporters had been shot in Virginia. WDBJ.

I wish I could say alarm bells went off, but instead I got cold. A swift, spiky tide of ice ticked its way up my stomach. I felt my face heat up as I squinted at my phone and reached for my glasses.

It fucking cannot possibly ever happen.

Then, her name; Alison Parker.

My dad decided to take pictures of Alison before we were going to the Gold Cup race because she was the only one who was dressed and organized that morning.

I am a Mary Sue. I say "like" and "cute" and "I can't even." I shake my hands when I make a point and I overpluck my eyebrows. I spend too much money at Whole Foods because long-winded descriptions of organic salmon turn me on. I am a dime a dozen.

She was not. She really was not. It should have been anyone but her.

Alison was murdered. She had not assumed the risk of getting murdered, it just happened because some crazy person had a vendetta.

She was and always will be better than me. I think that is the worst part, knowing you're still here and someone who could have done more for this universe is gone.

I met her at James Madison University. I had been the head news editor at the school newspaper for a few months. I had not earned this 24/7 job. I had inherited it. People kept quitting due to stress.

Then she burst in. There I was, sitting at the news desk. I hadn't showered in over 50 hours, hadn't brushed my teeth in as many. I was wearing torn sweatpants and in she walked all shiny brown boots and whirling pink coat, ready to interview for co-news editor. She was even smiling.

Alison got the job, of course. She was the kind of woman to come in and take over. She was not scared of anything. She had grown up in a town too small to contain her. She was assertive, confident, and knew what it was like to face people who sweethearted and cooed at you, but pushed you down when press time came.

Once, she confided in me that when she was younger, kids used to make fun of her because her brother was autistic. She defended him, of course. It never occurred to her to shy away from a fight. She was Alison Parker. Strong as hell.

I sparred with her over stories and ledes and page layouts, but it took two weeks for me to realize that I was going to leave and she was going to take over. She wanted this more than I ever did. Journalism was the heartbeat of her life. 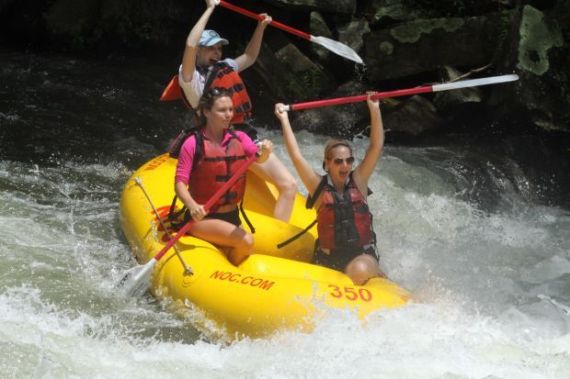 Rafting with another friend. Nantahala river -- near Asheville, North Carolina -- was her favorite place in the whole world.

She would be the first one on the phone or carrying over a six-pack when I cried because I'd gotten rejected from a law school, or because of my ex-boyfriend, or just because I felt so lonely in my last few years of undergrad and my first few in the law school I finally did get into.

Hell, she was there when I had such bad digestion problems that certain substances were needed to cure certain things. Then she laughed when she heard the sound effects.

Laugh probably is not the right way to describe her laugh. She guffawed when she was amused. Her eyes would crinkle up and water slightly and she would keep guffawing until she ran out of breath.

She was real. Friendship is not just sunshine, daisies, wine nights, and shopping dates. I actually can't think of a time I went shopping with Alison - unless you count grocery shopping. It's laughing with you when things are just going so stupidly wrong there's nothing else to do, it's giving you real talk when you want to embark on some flight of fancy, it's showing up at your graduation.

It's driving for three hours on a limited schedule just to sit on your deck and catch up, it's laying down on a smoke-stained carpet to complain about stupid shit no one else will listen to, it's staring at each other across computers and communicating with only nostril movements. 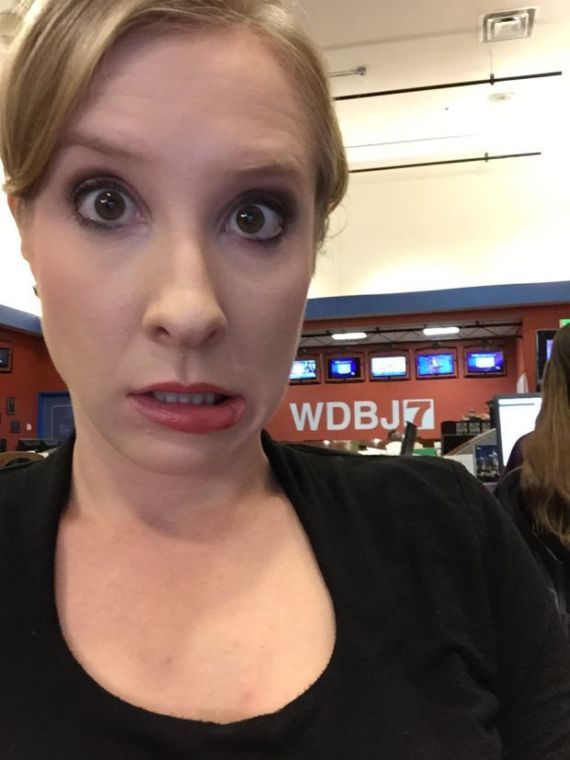 She was the selfie queen.

We spent our limited vacation time going on adventures with each other and Katy Summerlin -- another close friend to whom Alison introduced me to. While she was starting her journalism career and I was laboring away at law school, we made the time. We always knew we'd see each other -- and we did. We also knew we had the luxury of time, but we didn't.

God knows - as anyone who knew her would say - we'd see her on national television.

Then that Wednesday happened.

I saw her face on news channels over, and over, and over. Seeing her scream. There will not or cannot be anything worse. Ever. It is agony.

I want to say that I did what everyone told me to do - shut down the television, don't look, but I could not. I watched every single ugly time I saw her scream. I screamed, too. I wanted the narrative to change. I wanted her to jump off the railings or anything. Something. I was addicted to the what-ifs.

I called Katy. We could hardly speak. In between gasping sobs we asked how? Why?

I wanted to un-say it, un-hear it all, so I texted Alison. Her contact picture was a close-up of her smooshed face. I looked at my Snapchats to see if she had opened the one I'd sent at midnight. She had. Probably right before she'd left for work.

I called Alison's mother. Her voice held steady. It made me feel steady. She could sound so much like Alison.

I listened to that first initial Fox News interview in a rental car that night while I angrily chewed on my nails and slammed my palms down on the dashboard of the car every time Megan Kelly tried to ask questions about motives, or guns, or the shooter. I thought about the fact that I would have one less bridesmaid walking down the aisle for my wedding nine months out.

I am not as good as others as trying to live the way she would have wanted us to live. I am angry.

I used to look at people who had lost someone to this kind of violence and not get it, now I feel bound to them. And I want to talk about it.

So many people treat it like the elephant in the room, but I want to talk about her all the time. I don't want people to forget her. Remembering makes her real, not just a headline or a picture or an obituary.

As some Billboard song's lyrics go, at this point I have searched at the bottom of several bottles for answers on where to go from here. I have also climbed to high points on the Appalachian trail, low points on the balcony of my apartment, and I even grudgingly put foot in a few churches.

I think crying into my fiancé's favorite business shirts have been, thus far, the answer. Or maybe it has been the text conversations I have with Chris - her boyfriend - and Katy that keep everything mildly on keel. The joking: Hey how was counseling today! Or, Hey I found so many embarrassing pictures of her! Or, Oh god, I still have that Yo Gabba Gabba towel I stole from her like five years ago.

We were normal. We were real. She is real. She is gone and the moment she became gone is captured over and over again for the whole world to see. There will never be a time I can't see her death. But I will try and make sure we can see more of her life.

I don't think I can impart anything at this point except the exquisite pain of knowing there were some opportunities I had to be with her that I missed out on. You always hear people voice regrets. Well, I have plenty.

I wish I had flown up earlier and gone white water rafting with her, Katy, Chris, and her parents instead of starting my job early. I wish I had gone to her graduation instead of panicking over my first set of law school exams.

I also wish that people like the shooter were not able to buy a gun, but wishes are useless unless there is action behind them.

I read when I am upset. I like to join another world. Get the hell out of this one. I started to read The Lovely Bones again. In it the protagonist watches her family and friends live their lives after her demise. I know it is fiction, but I hope it is true.

More from xoJane:
Scream Queens Is (Probably) Just Trolling Us With Racism, But It's Still Problematic
Hey Guys, Stop Trying To Make Girls Who Like Sports Prove It With Your Weird Interrogations
I Invented The Semenette, And Used It To Impregnate My Wife