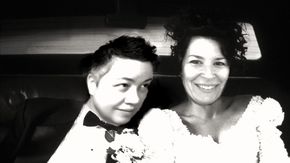 My sister's Jewish ex-husband liked to joke about being a "Super-Jew." When he'd use that term, I knew exactly what he meant. Not because I'm Jewish, but because I'm Greek. To me, a Super-Greek is the kind of character you see in Nia Vardalos's My Big Fat Greek Wedding movies, based on an archetypal Greek immigrant family that came to the United States in the 1950s or 60s with a lower educational background but a firm work ethic and an ultimate value for family. Vardalos captures the essence of the traditional Super-Greek family in her films. In my family growing up, I experienced the same expectation that my big fat goal in life was to get married (to a man) and the message that college education was unnecessary for girls. In fact, despite being very bright and motivated, my mother only had the opportunity to complete school through the fifth grade and was given away though arranged marriage at age 16 to my father, a man she'd only met once. The heterosexual marriage assumption in Greek culture can be suffocating, especially if you grow up realizing that you are Greek and queer.

When I was growing up, my exposure to queer culture through the Greek immigrant lens amounted to my mother telling me, "Lesbians are worse than prostitutes." I remember asking her what a lesbian was and her response being, "Lesbians are two women that get together and one pretends to be a woman, and one pretends to be a man." This definition brings me endless amusement now as a femme lesbian who loves her butch partner to the ends of the Earth. If only I had taken my mother's definition to heart I could have skipped a whole phase of coming out where I thought I had to have a short haircut and wear button-down shirts and penny loafers. It was such a happy day when I decided to rebel and grow my hair out long and paint my nails again.

I can be light-hearted about it now, because my mother has come a long way, and not only respects and supports my partner and me, but is my biggest champion. But when I was growing up, and for many years thereafter, coming out while Greek brought me a lot of pain. And to be honest, I still have my moments of pain trying to bring together my culture with my queer identity.

Even though I have an agented novel out on submission about a quirky Greek foodie struggling to reconcile her religious beliefs with her emerging sexuality, and a poetry manuscript that reflects on the experience of Greek diaspora over three generations, and my children have attended Greek school, I still can't call myself a Super-Greek. In my mind, a Super-Greek would have a natural place within the Greek community, and as a Greek lesbian, I don't. Despite years of trying, I have few Greek friends. It is incredibly rare to meet other Greek queers, and while next generation Greeks are friendly, I don't see many who are eagerly inviting queers to their parties. The official Greek Orthodox religious stance is that homosexuality is grounds for ex-communication. So you see, even if I did want a Big Fat Greek Wedding of my own, I'm not allowed to have one in the church.

I know there are some Greeks who don't like the Big Fat Greek Wedding movies because they play up stereotypical images of Greek immigrants for laughs. That may be true, but as I watch those movies I see my mother's house robe and remember how my father told me not to go to college. I think about the dowry I started collecting when I was 12 so I'd be ready for my groom. I do see reflection in those movies, and I feel my invisibility and exclusion as I create a life outside of heterosexual matrimony.

The movie trailers for the sequel to My Big Fat Greek Wedding let us know that there will be another wedding, but they don't tell us whose. Will it be the grandparents remarrying? Will it be a renewal of vows for our main characters, Toula and Ian? Will it be the granddaughter finding love with her new boyfriend? The movie carries these three subplots, and because it's Hollywood and this is a comedy, I expected a surprise and a few laughs.

What I wasn't expecting was to sit in a dark theater watching the sequel with my mother, my sister, my three children, and my butch partner. I wasn't expecting Andrea Martin's character to turn to her son and say, "Families don't keep secrets. Is he your partner, or your partner?" Sitting there in the dark, I felt a wave of shock electrify me, and I felt the tears threatening to overwhelm me as I realized that Nia Vardalos had written queer Greek life into visibility in a mainstream Hollywood movie, even for that fleeting moment.

And then a hysterical hope started to grow within me. I know it will probably sound ridiculous to the cynics among us, but I let myself fervently hope that the surprise wedding would not be the grandparents, or the parents, or the daughter's. I let myself hope that the surprise wedding would be a gay one. That Joey Fatone's character would experience the uplift, celebration, joy, acceptance, euphoria, and community support to create a beautiful Big Fat Greek GAY wedding.

But alas, the wedding was not a gay one. In the end, it was all the straight couples reaffirming or finding love. But the gay cousin was there at the table, part of the community, with his male partner, still accepted, and still Super-Greek.

In an interview with HuffPost Live host Caroline Modarressy-Tehrani, Nia Vardalos said about including a gay family member in the script, "It is our issue, and the more that we speak out for each other's issues the louder our voices will be...the goal is parity. That's it." While I wish that My Big Fat Greek Wedding 2 ended with a surprise gay wedding, I am holding out hope that My Big Fat Greek Wedding 3 could still bring that surprise home and create real parity for the Greek queer community.