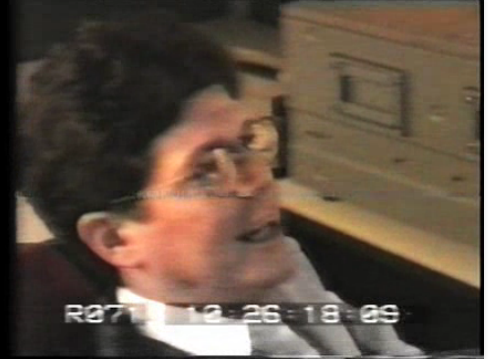 In 1992, I had just launched a new business called Video News International.

It was the world's first video journalist network.

I had trained and equipped more than 100 VJs around the world, many of them highly established journalists with very good credentials in print or photography.

The idea was to cover news and sell the service to network news organizations.

Because the investors in the business all lived in Philadelphia, they wanted the business based there. (You know, Philly, media capital of the world... after New York, Los Angeles, London, Cleveland...) OK, that was a mistake.

One day, a young intern who was working for us named Anthony Lappe pulled me aside.

Besides working for us, he was also working for Comcast, the local cable company in Philly.

"There is something you HAVE to see," he told me. "Comcast is doing this REALLY cool thing."

A few nights later, Anthony took me down into the basement of the Comcast building in Philly.

There, in a remote corner were four or five young guys with long hair, dressed in jeans, messing around on computers attached to big video screens.

"This," Anthony explained to me, "is the Internet."

Anthony introduced me to the head of the Internet project.

"Anthony tells me that you have like 100 journalists around the world with video cameras making stuff," the guy said to me.

"We are looking for content to put on our Internet here," and he tapped a giant video display terminal. (Those were the days when the screens were giant cathode ray tubes).

Well, I said I had lots of content to offer.

The guy's eyes lit up.

Well, I am always looking for new clients.

"What are you going to pay?" I asked.

He said that they could not pay anything for the content, but they would set up a URL for me, a website.

"We'll build you a website that will have all the content on it, and we'll give you a URL."

"It's kind of like your address on the web."

"The Internet," and he tapped the CRT again.

"We can make a URL and website for you any way you want and call it.. Oh, Broadcast.com, or TV.com or Television.com or News.com. And you'll own the website and the URL in exchange."

"What would I do with this URL thing?"

"Well, it could be your business. You know, you could be TV.com or Broadcast.com - video and information on the web. You make it, we'll take care of the technical details."

"I don't see how TV.com is a business," I cleverly replied. "You're only in 1300 homes. And there's not even any advertising."

I thought about it for two seconds.

And I walked out.

Well, that Internet thing turned out to be bigger than I thought.