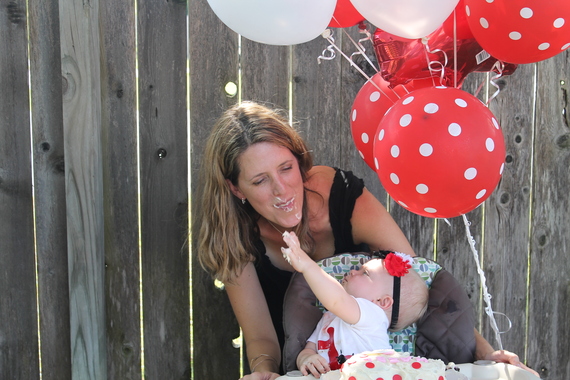 42. No, we're not talking about Jackie Robinson here, trailblazer though he was. We're reviewing the number of trips around the sun you've taken in this body, on this planet, housing this soul. It's staggering if you think about it. All the iterations of yourself -- baby, child, teen and then adult-ish -- spanning numerous incarnations filled with strife and fun, love and shame, suffering and healing, solitude and union. At 42 you're a mother and a wife -- both strikingly more difficult and worthwhile than you ever imagined. You're also a friend, daughter, sister, in-law, aunt, marketer, writer, music-lover, yogi, conundrum and more.

It's easy to get mired in the marvelous monotony of it all. 365 days of waking, working, cuddling, cajoling, connecting, laughing, loving, suffering, soaring, diaper-changing, potty-training, fighting, numbing, succumbing, overcoming and every other -ing you can think of. In a breath, a year could pass unnoticed. And then another. And yet another. Then a lifetime.

But you know better. You are a keeper -- capturing moments for your friends and family -- committing them to page and heart. As precious as your beloveds are to you, you've learned (especially this year) that you are sacred and deserve honoring too. Yet if I know anything, I know you. You'll forget. So each year, around your birthday, we'll write a letter to celebrate the wins, forgive the losses, recount the love as well as the lessons, and help foster growth.

In that spirit, here is a summary of 41:

So there it is. Certainly there was more, but this is the heart of it. Keep up the good work and the faith. Here's to many more letters to come and I'll see you in the mirror.

Mom, marketer, writer, wife, and unpaid participant in a sleep-deprivation study hosted by her adorable offspring.