I am one of those people who are prone to have a popular song pop into my head when I encounter some unforeseen event or surprise. It may be a senior thing. "My Boyfriends Back," a 1960s pop tune came to me when the radiologist confirmed to me the results of a biopsy indicating that my breast cancer had returned after six years. The song, of course, had little to do with the initial anguish of this news, but did bring a little smile to my face when I realized that even with the breadth of the diagnosis, I had exceeded the five-year survival period that I had anticipated after the lumpectomy, chemotherapy and radiation treatments I had endured in 2006.

So it was time to gather my emotions and prepare for another regimen of treatment that would be more extensive this time: a double mastectomy, and another round of chemo. To be honest, the announcement of this recurrence was not as heartbreaking as the news of the first cancer. In fact I took it almost stoically when my surgeon, the same surgeon who did the lumpectomy, described his recommendation and was encouraging about the prognosis's as well as the procedures, and additional therapy. My first hard decision was whether I would choose a reconstruction after the mastectomy. As a woman quickly approaching 70, my attachment to these body parts was long-term, but I pondered about a week whether to undergo two surgeries and a longer recovery period with reconstruction. My final decision -- no reconstruction. I felt I could continue life with the prosthesis and wear the same garments I have been used to.

The road to treatment and recovery has taken awhile. The steps included a plethora of tests including CT scans, blood tests, surgery, quick recovery from that procedure, healing of drains and incision, followed after sufficient healing (about a month) of chemo. In my case, chemo was six treatments over three months. I am about to finish in a few weeks. This process of infusing poisons to kill bad cancer cells also kills good cells and I have also been on the alert for reactions to the implications to white blood cell counts and to my immune system. Needless to say, I have been careful to stay away from sick people. So far so good.

I attended a benefit for cancer recently that included a fashion show featuring breast cancer survivors. The Barbara Bates Foundation event was one of the most inspiring events I have witnessed in a long time. Ms. Bates is a nationally known dress designer and a breast cancer survivor herself. Women from 28 to 75 were the models who strutted their stuff to an enthusiastic audience as the models were introduced with the length of their survival announced. The audience heard a range of survival times, from 20 years to still in treatment. I was amazed at the number of women who had survived two and three recurrences. I sat up a little straighter and began to see myself among these stout-hearted survivors.

The host of the benefit show was the comedian Sinbad who related that his mother and two of his sisters had battled breast cancer. His wit was spontaneous and hysterically funny. But his overall message was that the fight for a cure for breast cancer has to continue aggressively, particularly treatment to women of color who often do not seek the initial mammogram. The challenge to this community, particularly in Chicago, to get the exam is important and must be encouraged aggressively. The benefit will support a special breast cancer outreach program at Mt Sinai Hospital in Chicago.

As a survivor I had a recurrence in the same breast that had been undetected less than one year ago. I felt the lump and took myself to the doctor who told me to check it out. And, of course, I did.

Women today have the benefit of being educated than ever before. And -- increasingly -- women these days realize that breast cancer is not a death sentence. In so many cases it can be viewed as a chronic disease and treatable! That's the way I see it now. As we near the end of October as Breast Cancer awareness month, remember that it's not just about awareness for 30 days, its 365 days.

If you have a relative, friend or colleague - give them a nudge and encourage to be on top of their mammograms and annual checkups!

PHOTO GALLERY
My Boyfriends Back 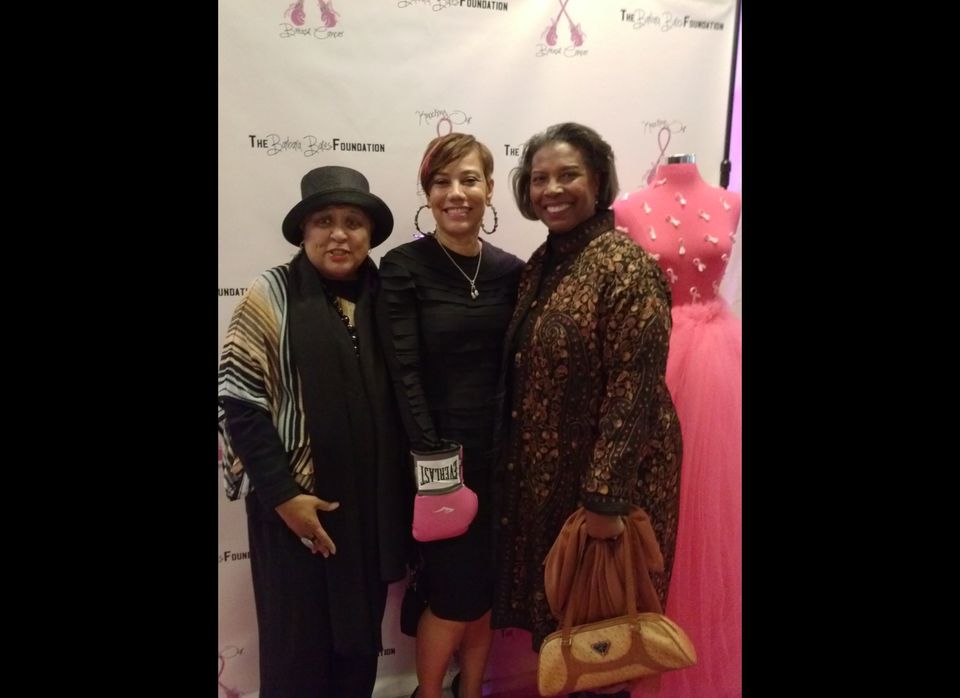 1 / 1
Breast Cancer Survivors!
We love to support fellow breast cancer survivors. Thanks to <a href="http://www.barbarabatesfoundation.org/about-barbara-bates/" target="_hplink">Barbara</a> and her foundation for raising awareness for breast cancer with her annual event "<a href="http://www.barbarabatesfoundation.org/" target="_hplink">Knocking out Breast Cancer</a>". (from left to right, Pat Johnson (Grannies on Safari co-host), Barbara Bates (fashion designer), Regina Fraser (Grannies on Safari co-host) (Photo Courtesy Grannies on Safari)