Be it the bold and intricate beadwork from the Maasai Mara or the handcrafted sea glass beads from Ghana's Cape Coast, when such jewelry is unfailingly noticed, I quickly direct the conversation to the independent African businesswomen who have made and sold me these pieces over the past years.

And although these women are talented entrepreneurs, they are pushing up against a disturbing status quo:

Consider that in Sub-Saharan Africa, 12 percent of births are by mothers still in their teens, who then carry the economic burden of supporting not only themselves but their children. Dreams of independence -- including an education and a career -- are too often foregone for day-to-day survival. Women in the region disproportionately struggle to be involved in development, as 46 percent can neither read nor write, compared to 28 percent of men. Women also struggle to be meaningfully involved in governance, as, on average, women hold only 18 percent of seats in national African parliaments.

But today I am sporting an Indego Africa batik bracelet that I purchased at fashion designer Nicole Miller's recent SoHo soiree, and I am inspired to believe that the status quo is about to change direction -- for women entrepreneurs in Africa and for the Fair Trade movement alike. 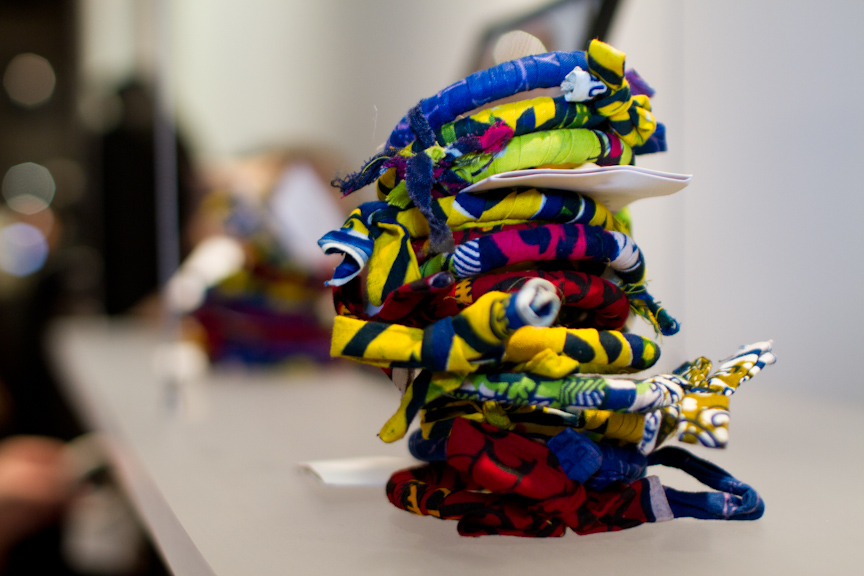 Indego stands for "independence, development, governance", and Indego Africa is fighting systemic poverty by giving women a chance at all three. By facilitating access to export markets, Indego is creating opportunities for African women in low-income communities to provide their families' basic needs, and to acquire the education and skills that enable long-term earning potential.

Profits are invested back into the artistic cooperatives who produce goods -- like the Couture de Kicukiro Cooperative who made my Nicole Miller bangle (see video below), or the Ingenzi Knit Union who fashions scarves sold nationwide at high-end retailer Anthropologie.

Woven into the artisans success is another crucial change in the status-quo: challenging the world of Fair Trade to keep up with Indego's tenaciously business-minded approach to social change.

"What that means to us," explains CFO Conor French, "Is that we take an outcome-based approach and focus on core principles like good governance, accountability, and sustainability."

Now, Fair Trade Fashion is certainly not a brand new idea: stores like Ten Thousand Villages have delivered fair trade products to North America for years, ensuring profits go back to producers in low-income communities worldwide. And groups like Mercado Global even take the same approach as Indego, investing a portion of profits back into business training for their artisans.

So what makes Indego so unique?

A focus on the long-term earning potential of every woman, "so that future income can be generated without our assistance," explains French. "The bottom line is that our artisan partners need to raise their families standard of living now, but also need access to educational pathways that move them toward sustainable, economic independence in the future."

Some might say Indego is aiming to put themselves out of business. Indego calls this professionalism.

French emphasizes Indego's belief that "effective systems drive sustainable solutions." Rather than seeing the economic crises of women in Africa and responding in an ad-hoc, emergency manner, Team Indego has spent years preparing the solid infrastructure and systemic processes that now define their brand. And in the midst of today's instant gratification culture, this kind of preparedness and common sense is a breath of fresh air.

Indego is infusing this much needed professionalism into a sector where it can be difficult if not impossible to track the progress of the artisans behind every product. And while it is not yet common practice to conduct social impact assessments for the public record, Indego considers this exercise "instrumental" to earning and honoring the trust of their donors and customers.

High-end brands like Nicole Miller are also noticing, and appreciating, this approach as well.

"My ultimate goal is to help women help themselves," Miller explains, and realizes that in partnership with Indego Africa she can achieve this goal -- and ideally, can encourage others in the fashion world to follow her lead.

So what does my jewelry say today?

My jewelry says I have contributed to increasing food security, boosting literacy rates, and improving housing conditions for women and their children in Rwanda.

It says that three years ago, Emelienne Nyiramana, Master Seamstress at Couture de Kicukiro Cooperative, was toting water seventeen kilometers for 25 cents a day to support her five children. But today? After completing Indego's training program, Emelienne was admitted to the Goldman Sachs 10,000 Women Initiative Entrepreneurship Certificate Program in Kigali in July 2010. Emelienne's business career, her family's health and well-being, and her local economy are blossoming.

This is the kind of story I want my jewelry to tell. By shopping with Indego Africa, yours can too.