A deeply personal encounter with David Kaczynski and Linda Patrik, family members of the man who was once the most sought after terrorist in America.

We meet in the middle of nowhere, a vast prairie in the Southwest. David Kaczynski and his wife Linda Patrik don't want it to be known where exactly they live, even after all these years. "My brother has a fan club," David says. Theodore "Ted" Kaczynski, the Unabomber, was once the most sought after terrorist in the US. Between 1978 and 1995, he mailed 16 bombs, killed three people, and injured 23. The FBI dubbed him the Unabomber, because he sent his bombs to universities and airlines. In David Kaczynski's forthcoming book Every Last Tie: The Story of the Unabomber and His Family (Duke University Press Books), he tells the story for the first time from his own perspective. Ted Kaczynski got a life sentence, but in some ways, his family did, too.

Michaela Haas: Why did you spend the last 20 years advocating against the death penalty?
David Kaczynski: Because the death penalty is a false solution; it just causes more pain. After the Unabomber crisis, I became a man on a mission, committed to putting a human face on my mentally ill brother and changing people's minds about the death penalty. The question is: How do we heal? How do we heal in a way that actually helps transform society? Over a 15-year period, I travelled to 39 states and gave more than a thousand public speeches in which I repeated my painful family story endlessly and outlined the reasons why I thought capital punishment was a terrible mistake.

Is this why you have reached out to many of your brother's victims?
DK: After Ted was arrested and we were haunted by the media, I got quite depressed and I went through this "poor-me" phase, because the government had betrayed us. They had assured us nobody would ever know that it was us who identified my brother as the Unabomber, but the same day my brother was arrested in April 1996, that same government turned into a leaky sieve of information about the Kaczynskis. Linda gave me a tough love talk, reminding me that others suffered much more, "You've got to think about all the other people who got hurt, it is not about you." I understood that I was part of a much bigger picture of suffering. Not long after that I decided to write letters to the victims and apologize. Most of them didn't respond, but I ended up having a phone call with one of them, Gary Wright, who became a very good friend. We need to make the world wider than our ego.

How did you realize that your brother was the Unabomber?
DK: I would never have guessed it. To me, he was my big brother I had always admired. The brother who had genuine empathy for children, animals, and people living on the margins of society.. The brother who looked out for me. The last time I saw him was in 1986, and I did not suspect anything. Then he broke off all contact. At its peak, 125 FBI agents were searching for the Unabomber full-time, but in the end it was Linda, a private citizen, who had never even met him, who cracked the case.
Linda Patrik: I was the one who first thought his brother was the man they were looking for, and it took me three or four months to convince David that this was a real possibility. 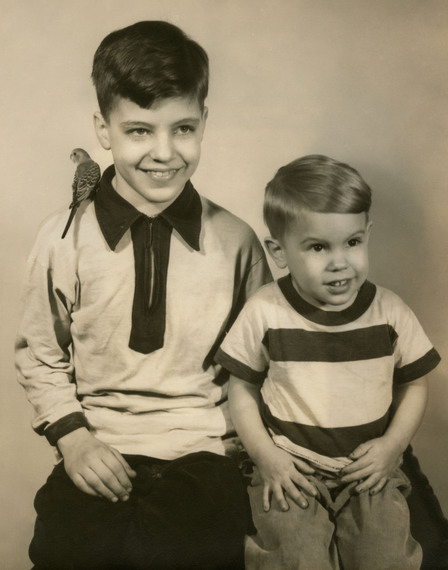 It's astonishing to me that you had this intuition though you had never met him.
LP: He wrote us letters that made it clear to me that he wasn't mentally well. He told us he had a heart condition and was seeing a woman doctor in Montana, but in his letters to us he described how he wanted to date this woman (in 1991), and it was very creepy. I convinced David to take these letters to a psychiatrist, and the psychiatrist agreed that Ted was disturbed, but when we asked if anything could be done, the psychiatrist said that this was virtually impossible, because Ted hadn't committed any crimes. David phoned the doctor and followed up with a letter hoping to have his brother referred for mental health treatment

In reality, though, he had already committed crimes.
DK: Yes, he started in 1978, but the FBI concealed all the information. They had the strategy that they didn't want the public to know what they knew. After my friend Gary was hurt in 1987, the FBI acknowledged for the first time that these different events might be linked.
LP: In August 1995, I couldn't keep my suspicion to myself anymore. We were actually in Paris, on a trip celebrating our fifth wedding anniversary, when I asked David: Do you think your brother might be the Unabomber?
DK: I thought this was out of the question. Then we went through the process of comparing my brother's letters to the Unabomber's manifesto that the New York Times published in September 1995. When I read the manifesto I was no longer completely dismissive, but I still thought we would find out he wasn't. So it was a slow process for me to catch up with Linda's intuition.

Where were you when your brother was arrested in his hut in Montana in April 1996?
DK: We watched it on TV. I have never seen anybody who looked so tattered and bedraggled. They found a bomb under his bed, ready to be sent. So we had done the right thing. Immediately, the media hounded us. Reporters somehow gained access to our bank records. They dug through our garbage. They called our unlisted numbers. They besieged our friends and relatives with interview requests. It felt as if we had not a shred of privacy or dignity left.

I'm surprised you speak with the media at all.
DK: The media later became our ally when we fought against the death penalty. It would have been much easier for me to turn my brother in if I didn't potentially surrender him to being executed. I thought it would kill my 79-year-old mother too, having to watch the execution of her son, because her other son turned in his brother.

How did you help spare your brother the death penalty?
LP: Do you know about the Harvard experiments? Ted was highly intelligent and was admitted to Harvard University when he was only 16. They did a psychological study about him when he entered college as a freshman, and it showed indications of schizophrenia. Instead of helping him, or informing the family, they conducted experiments that some trace back to the CIA. Harvard was one of the few major universities that had not signed an agreement after World War II not to conduct experiments with human beings without telling them what the experiment is about and obtaining "informed consent" from the participants. They selected the most maladjusted, most alienated freshman. David's brother was the second worst in terms of maladjustment.

DK: Every week for three years, someone met with him to verbally abuse him and humiliate him. He never told us about the experiments, but we noticed how he changed. He became harder, more defensive in his interactions with people. If the case had gone to trial, what happened to Ted as a helpless guinea pig in a government-funded study would have come out in open court.

Why did you decide to publish the book now?
DK: Our story has been told so many times by other people. Almost always it came out a little wrong. I wanted to set the record straight and tell it from my perspective. It is also to memorialize a family, our parents, who were the best parents they knew how to be. And then I guess, I would like people to take away some degree of empathy, have greater awareness regarding mental illness and the struggles many families experience when a family member becomes sick. A lot of people have stereotypical notions about mental illness. i.e. that a person is completely disconnected from reality, or that none of Ted's ideas could be valid if he's "crazy." I think it is much more complicated. What I see in his diaries is a person drowning in their pain and loneliness and totally losing perspective on who they are, what the world is and what it means to be human. This is someone I once loves, and still love. Because I know his potential, the goodness buried in him somewhere. If there is something I would like the book to do is for people to think less simplistically about mental illness, to take it seriously and to understand it as a much more complex phenomena.

You have worked with at-youth-risk, as the director of New Yorkers Against the Death Penalty, and as an advocate who met with countless family members of other terrorists or their victims. Did you find the healing you were seeking?
DK: Yes and no. Yes, because through this work I have met so many incredible people. It is quite hard to listen to their stories, and yet inspiring, because they all have this arc of spiritual epiphany of some kind.

And no, because I promised my mother on her deathbed not to give up on my brother, and yet he denies me any opportunity for reconciliation. I still write to him in the Supermax prison in Colorado. I never get a response. Maybe one day the door will open.