My older brother David Rice was a Democrat. He was killed on the 104th floor of the South Tower in the World Trade Center on Sept. 11th, 2001.

David was killed with Republicans, Independents, and Democrats. On that day, they were not members of political parties, they were Americans.

Some Americans and politicians apparently believe my brother was to blame for his own murder because he voted Democratic, which apparently surrendered our borders to those who want to kill us.

One of those Americans is Mike Meehan of Orlando, Florida.

Mr. Meehan's divisive and desperate attempt to scare Americans with his billboards urging "Please Don't Vote for a Democrat" beside an image of the burning World Trade Center is unfortunately not the example of an isolated, fringe politico, but instead is part and parcel of a trend in American politics where right-wing hacks love their extremist ideology more than their country. They care more about winning elections and achieving power, than building good government. 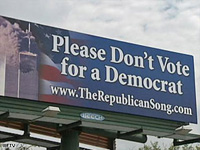 It would have been naive to think we could have permanently transcended our differences as Americans out of 9/11, but it is not too idealistic to hope that we could have found common ground on how to protect our country and preserve our common values.

There are those in politics who will continue down this road because they simply have nothing else to offer. They have no coherent policy to marginalize extremism in the Middle East. They show no willingness to ask Americans to commit themselves to the shared sacrifice that is needed to deal with the climate crisis and transform our energy policy. They have no message except to demonize their political opponents and, in turn pollute America's faith in our otherwise inspiring democratic process.

But there are others of us who are entering the political process to steer our country away from this pathetic and un-American demagoguery. I meet candidates and grassroots activists in Oklahoma and around the country who insist that our elections and public policy can embody more substance and visionary solutions while at the same time avoiding the lazy and cowardly political impulses of the last 8 years.

We have a choice. We can find ways to set out as American citizens to rescue our politics and our faith in the American system so we can meet the complex challenges together, or we can continue to extinguish the dwindling faith everyday Americans have for our political parties, and thereby reduce the public policies of the future to shallow and meaningless attacks against each other.

I am proud to say that I choose to be part of a broad-based coalition of Oklahomans and Americans who take part in our political process so we can give our country the chance to meet the growing challenges we will face. And I do this with humility. I know I will make mistakes, but I also know that I will not demonize other Americans and demean our process.

We cannot afford to allow the Mike Meehans of our country to divert and distract us from achieving the great promise that lies before us. I am committed to this challenge not just in memory of my brother David, but in memory of those who he died with who I would not have agreed with about politics. What is at stake is too important for us to keep going down the road of the last 8 years. 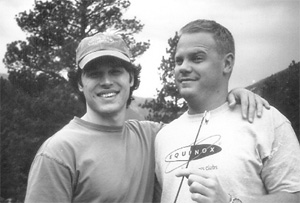 Me and my brother, David.

Andrew Rice is a State Senator from Oklahoma, running for US Senate.