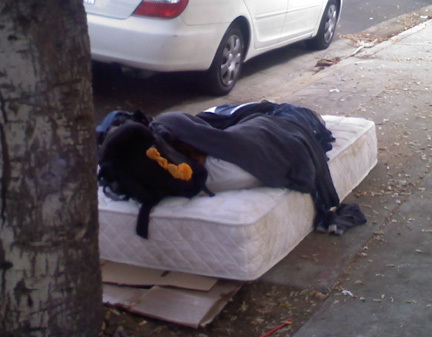 The reason my blog is called "The Trash Whisperer" is that I have a hobby -- a vocation, really -- of picking up trash while I walk the dog. I've been doing this for years, but only this summer did a homeless guy decide to claim a mattress on my "route" as the place he lay his head at night. I thought he'd be there for just a few days, but when the city never came for the mattress, he settled in. Sometimes in the morning our eyes would meet, but mostly I hoped he would conveniently disappear to some magical place where the homeless got housing and food, so I wouldn't have to feel bad about how clearly destitute he was.

The homeless make most of us uncomfortable. Giving them money blunts our unease, even as we wonder if we're just enabling toxic behavior. We resent the vague sense of guilt we have no rational reason to feel, but somehow do. I realized I was afraid of the young man with the bushy beard -- less that he'd be violent or mentally ill than that he wouldn't. I wanted us to be as different as possible, so that my (relative) prosperity could somehow be inherently deserved, whereas his poverty would reflect his bad choices.

And then one day I put all of those considerations aside and just said "hi." Somewhat surprised, he said it right back. This went on for about a week, and then I asked him what his name was. "Chris," he answered. He was suddenly a real person, just like that. I asked him if he was hungry, and of course he was, so I gave him money for food. Every other day or so, I'd give him a few bucks, and then I began to ask him about his life.

Chris was taken from his alcoholic mother at eight, but not before getting beaten and abused by a string of "uncles." Foster care was little better. He was angry, and lit fires. "I was out of control" he confessed. When he turned 18 the judge arranged for him to "join" the Marines, but Chris chafed at the idea, and embarked instead on a life pretty much on the streets. He worked itinerantly all over the country, but has never had an apartment of his own, or even -- this amazed me -- a photo I.D. (These days, you need a photo I.D. to get the birth certificate you need to get a photo I.D. It's a classic Catch-22.)

Chris is 35, and he's not a drinker or an addict. He does qualify for SSI on mental health grounds (bi-polar and depression, not schizophrenia) but his benefits were suspended when he went to jail. His felony was dealing pot, and he did less than a year. His first parole officer was "great" but the next sent him to a program in a rough part of town with residents that were actively dealing drugs and sometimes violent. Chris' fear and paranoia took over. He absconded.

Moved by how gentle he is, I wrote about Chris on my blog, and several of some of the nicest readers on the planet have sent me money which I've passed along to him. I've given him clothes and done his laundry. I've posted song lyrics he's written, which are quite good. I bring him books. I listen. He's told me about the brother he used to protect who died of muscular dystrophy, and the girlfriend he had on the streets for seven years, who was killed by an infection. I think my heart broke a little when Chris told me "everyone I love, dies."

Chris can't get into back into the benefits system unless he faces the consequences of his parole violation, which probably means more jail time. He says he'll do that when the weather gets cold. I don't blame him for taking his time. I've been to jail. The idea of going back voluntarily is almost impossible to imagine.

I would not bet on Chris transforming his life, even with my help. He's one of society's throwaways, and in the current Darwinian economic climate, the chances are very slim he'll ever find a place at the table.

But a specific result has not been the point. For me, it's been about what happened when I discovered the willingness in myself to see a homeless person instead of look past him. I can highly recommend it. In the long run, it might not change Chris' life much, but it's definitely changed mine.