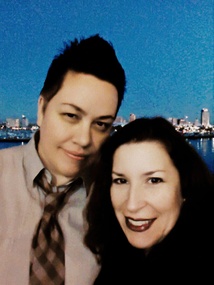 To be honest, I had given up on myself. Even though I was writing and getting my work published, had three amazing kids that I had worked so hard to bring into this world, and many things to feel thankful for -- when I looked in the mirror I saw someone getting old, tired and dull. My long-term adversarial relationship with my body image sank to a new low. I felt like my best years were behind me and my color was definitely fading. I had shut down emotionally, and I didn't even know it.

Being a stay-at-home mom and writer doesn't present a lot of opportunities for getting out and being social beyond the parent chit-chat at pick up and drop off. Feeling isolated, I had turned to social media as a way to reach out into the world and engage in some kind of human interaction. It didn't require a baby sitter, or cash, or much of anything, really, except a willingness to participate. I got into a groove, posting interesting essays and pithy anecdotes on Facebook and even ventured into the world of Twitter, a social world where encapsulating your thoughts into 140 characters is a requirement. Blogging for The Huffington Post brought me into contact with many new acquaintances and my Twitter followers increased as I posted each new blog. I had some fun, but still couldn't shake the feeling that some part of my life -- my vibrancy -- was over for good.

Each time I gained a new follower, I would look at that person's Twitter feed. There was one that was quite unlike the others, with gorgeous quotes that appealed to my literary side and ethereal, romantic photographs. Her tweeted conversations with friends demonstrated a wicked sense of humor, while her profile description revealed a sensitive and passionate side. "Butch Lesbian. Sagittarian. Musician. INFP. Passionate Soul. Stargazer. Lover Of: Music, Poetry, Books, Nature." Her profile picture intrigued me with her jaunty English driving cap, arching just so over her eyes that twinkled with knowing. I followed her back and sighed deeply, knowing that I would never meet her, but that it couldn't hurt to admire her handsome spirit from afar. 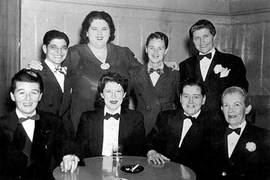 What followed was a polite exchange of likes of each other's tweets, an occasional personal message. She was gentlemanly and respectful. Then one day as I was scrolling through my Twitter feed I saw that she had posted a picture from the 1940s of San Francisco's first lesbian nightclub, Mona's 440. It was as if a spark lit through my body and I was on fire. The picture of a group of butch lesbians sitting around a table with the bar matron behind them seemed to have some inexplicable deep significance - like a signal that had finally reached its receiver across time and space. Illogical as though it might seem, in that moment, I knew that my destiny was somehow tied to hers.

Obviously, I could not tell her that. But somehow she knew too. She followed me over to Facebook, where we were no longer constrained by 140 character messages. Long private message conversations that extended deep into the night confirmed some unexplainable connection. My heart started palpitating each time we spoke. I started losing weight, no longer seeking pleasure from food. I would feel waves of her energy wash over my body reinvigorating me. The color came back into my cheeks and my eyes sparked with satisfaction. I was coming back to life. She was bringing me back to life.

We explored each other's Facebook photo albums, absorbing our histories and imagining each other embodied. Instead of avoiding the mirror, I started to enjoy my reflection. She told me I was beautiful and I believed her. She was handsome and intelligent and she wanted me. But she didn't just want me, she respected me, admired me, treated me like an equal and a lady at the same time. I started wearing deep red lipstick and dressed up for her each day. Even though we had never met, even though she'd never see what I was wearing. Until I started taking selfies for her, and then I started to see myself as she saw me. For the first time, I realized my body was beautiful, just like she said.

But deeper than accepting my body, or feeling beautiful, she taught me so many things about myself. By showing me her emotions, and being fearlessly honest and demanding the same from me, she taught me it was safe to feel things again. I am no longer old, tired and dull. I feel joy, desire, hope, determination. With her, I am learning to be strong and vulnerable at the same time. She has shown me that I can lean on her and feel protected, and also know that I can protect myself. I never expected to come back to life, when I was most certain that my vibrancy was over. I never knew that falling in love could bring me so much of myself.

And I was wrong about one other thing. I thought that I would never meet her, and that I was resigned to only admire her from afar. But some things are written in the stars. We did meet, and our souls connected, and her embrace brings me to euphoria. For my birthday, she registered and named a star to commemorate that fateful photo and place that somehow ties us together. She named it Mona's 440. When I am with her, it is easy to imagine being back in the 1940s, a Butch/Femme couple fiercely in love, tearing up the dance floor, facing any challenge head on. It's as if history and our present incarnations intertwine, unencumbered by the boundaries of time.

With my head resting on her chest, her strong arms around me, enveloped in her tender spirit, I can do anything. I am powerfully alive and in love. Thank you, Amy Liam, for bringing me back to life. Always be my Butch Valentine.