My cat died this morning. Her name was Guiness, named after the stout. Black body with a white head. (Yes, spelled incorrectly. I realized that later but the single 'n' stuck in all her paperwork). She was 15 and pretty much everything one hopes for in a cat. Gentle, affectionate, playful, loving. I'm sad as I type this. I miss her already.

People say goodbye to beloved pets everyday so my experience is hardly unusual. Probably most clicking on this blog post can relate. But viewing such loss through a theological lens is not so common. A rather trivial incident turned my thoughts in this direction. It also brought a smile at an unlikely time, and in an unlikely place. 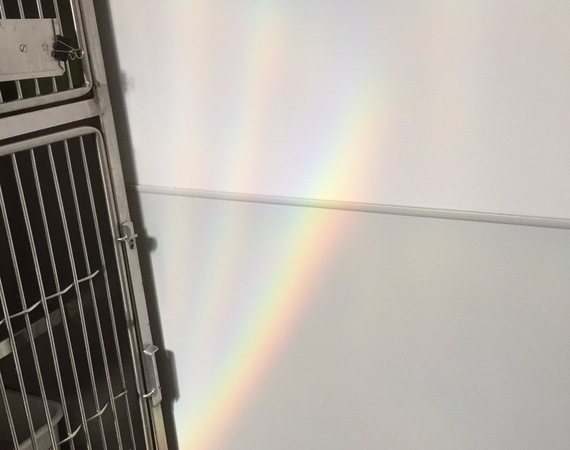 I volunteer at the Winnipeg Humane Society in Manitoba, Canada and as it happened, I had a shift beginning literally minutes after the decision to euthanize our seriously ill cat. Shelters like this are sad places. Unwanted, lost, sick and injured animals come through the doors all the time. The simple occurrence that brought the smile was the 'rainbow' that appeared while I was setting up cat kennels. As a professor of biblical studies, and an emotionally ragged one at that particular moment, it was inevitably suggestive.

What jumped to mind was the emphasis in this passage on the scope of God's covenant. Noah was not alone on the boat, even though later interpreters, ancient and modern, tend to forget that detail, fixated as they are on humanity's plight (see e.g., 1 Peter 3:20 and 2 Peter 2:5). Not so Genesis: a covenant with every living creature; every animal of the earth; all flesh on the earth. We're all in this together for good or ill, according to the God of Genesis 9.

The rainbow reminds us of God's promise not to forget the animals. That's the part that made me smile. It's embarrassing to admit how much the death of a pet hurts, to going on remembering them as though they really did matter. Better to grieve alone than risk someone saying or thinking, "it's just a cat" or "just a dog." "Get over it, forget about it." But God remembers that cat or dog. Or rabbit or bird. Obviously the sense is different but it's assuring to observe animal life is afforded great dignity in the first book of the Bible. There's no equivalent to "it's just a pet" in the poetry of Genesis.

I grinned a stupid grin when I saw that play of light through glass (witnessed only by the few cats in the room, I'm glad to say). It reminded me that Genesis insists animals are good. That humans and animals are all creatures of the same God. That we're all on the boat together. To love our fellow creatures, to miss them when they're gone, to be concerned for those in need (like my feline friends at the shelter), to remember them after death--this seems in keeping with the stories of the ancients. For those of a theological bent, there is solace here. God is in covenant with all creatures, including our cats ("for all future generations"). And as the rainbow reminds us, the Creator does not forget them.

The views expressed here are mine alone and do not necessarily reflect the views of The Winnipeg Humane Society.