For the vast majority of Chicagoans, summer serves as the city's saving grace, arriving on the heels of months of cooler temperatures and precipitation in almost every conceivable form. But for other Chicagoans, particularly those dabbling in the macabre, autumn marks the city at its finest.

This is particularly the case for someone like Marc Ruvolo, owner of Bucket O' Blood Books And Records in Chicago's Logan Square neighborhood. If you couldn't deduce it from the shop's evocative name, Bucket O' Blood specializes in books of the horror and gore genre, not to mention sci-fi, fantasy and a well-curated collection of used and new records including releases from Ruvolo's record label Johann's Face Records.

First off, tell me what inspired the store in the first place. Had you already dreamed of owning a storefront dedicated to the horror and sci-fi genres?
I never worked retail in my life. Ever. But I've run a record label for 20 years called Johann's Face Records and I've been reading science fiction, fantasy and horror since I was like 10 years old so I just sat down one day and I had lost my job and I just tried to figure out what I wanted to do and I thought well, I love vinyl, I love records and I love books. At first I thought I was just going to just start a genre bookstore, but there was no way it was going to fly on its own and make me enough money to get by, so I came up with the idea of a hybrid store with everything that I love all in one place.

(Scroll down to check out the shop.)

And it sounds like you're making it work -- you've been open for about a year and a half now, right? Considering that you had never worked retail before, have there been some surprises that you've run into in that time?
I think what's been really awesome and not really surprising is that so many people have contributed and helped me out by donating stuff in the store. People donated books to me, all the LP bins were donated, plus the bookcases and a computer. That just made it easier to open. I already had a community in place through my label -- in the punk rock and local DIY scene -- so that made it a lot easier to get started too. A lot of people helped out, including Davey Houle, my friend who sits in here one or two days a week when I need to go buy stuff or do other things, since I'm the only employee. He helps me curate the literary fiction section, which is not my forte. I read a little bit of it, but that's really his thing. He does a great job of it.

So you had the punk and DIY communities' support, but what about Chicago's literary community? What was it like to dip your toe into that pool?
I haven't really connected with other bookstores, but we do a lot of readings in here and I've connected with a lot of authors through them. Halloween is really big for us, obviously. We have local horror writer John Everson, who is going to be doing the Chicago book party for the release of his new book "The Pumpkin Man." He's a great horror writer and has like five novels out. On that same day, there's also a local publisher called Burial Day Books and they'll be releasing their new anthology, called "Gothic Blue Book," here. I've gotten to know a lot of authors, which was even better. I've been able to open a store as a physical extension of the label, but I can also have events here -- both musical events and readings -- which makes everything more fun.

How has having the storefront impacted your record label?
I'm selling way more records, which is great. Stuff that hadn't moved in years and was sitting in my garage. I think people see it differently because it's in their hands and they can pick it up, rather than looking it up on the Internet and not being sure if they should send away for it. Plus they can ask me to explain it or play it for them.

These are difficult times for a lot of small business owners, and many book and record shops have struggled in particular. How has business been generally for you?
It's good! I mean, I work 60 hours a week, but it supports me and itself. I set this place up not to compete with anybody else. I'm not trying to be Reckless or Powell's Bookstore. I'm trying to just do what I like and I don't feel the need to fill in things for other people. Like, "Do you have a self-help section?" That doesn't really fit in with what I'm doing here. It's just the stuff I like, which is a blessing in that I can buy what I like and have broad enough tastes that people can be into it, but it also makes it harder because I have to get stuff all the time. There's no place to call and make an order. I'm constantly going to thrift stores, estate sales, garage sales and looking at peoples' private collections. I work on this place obsessively, but I'm also still getting tons of people coming in who have never been in here before.

You mentioned that Halloween is pretty big for you. Do you have any particular books or music that you like to pull out around this time of year?
There is this record by Coven called "Witchcraft Destroys Minds & Reaps Souls" that I probably play way more around Halloween. They were a Chicago band and it kind of sounds like the Doors, only with satanic lyrics. They recorded a black mass here in Chicago which is on the album. They were crazy way ahead of their time.

[Vocalist] Jinx Dawson these days calls herself the inventor of "goth," essentially. She had long, blonde straight hair and dressed all in black with the upside-down crosses, and this was in 1969, before Black Sabbath started. They have an incredibly interesting story too. Their records came out and were doing really, really well until Esquire came out with a story on the Charles Manson Tate-La Bianca murders, which had just happened. They ran a picture of Manson holding that record up and they were dropped simultaneously by their label. After that, they made a comeback after the guy who made "Billy Jack," an Indian kung fu movie in the '70s, called them in to record a song on the soundtrack called "One Tin Soldier." It was a No. 1 hit for them.

And what about films? What are some of your horror favorites?
The store is named after the Roger Corman film "A Bucket of Blood," so I like Corman movies, but it's hard to say what my favorite horror movie is. I like "Suspiria," which I just saw about four or five months ago when they had a midnight showing at the Gene Siskel Film Center. It was awesome. Also, there's Jodorowsky, who has a movie called "Sante Sangre," plus "El Topo" and "The Holy Mountain." All of them are just freaky, fucked up movies.

Finally, I wanted to ask you about the neighborhood. So many businesses are opening up on this block in particular. You've lived in this neighborhood for a long time, yes? What do you make of the changes?
Yes, 17 years. And I think it's great, I just don't want it to go too fast. Everyone that's here right now that I've spoken to -- Cole [of Cole's Bar], Revolution Brewery, the [Cafe] Mustache people, the Sierra family and the people who own Vas Foremost -- are all awesome, nice people and are in it for the community. None of them are like money grubbers who are just trying to get the hell out of here and make their cash. The alderman blocked Walmart from moving in right over [by the Blue Line], where they were going to put in an "urban market," by changing the zoning. I think that would have been moving too fast. I don't want this to be Wicker Park or Ukrainian Village just yet.

Visit Bucket O' Blood Books and Records at 2307 N. Milwaukee and log on to their website to learn more about upcoming readings and other events -- including a Halloween costume party, featuring Ruvolo's band The Fur Coats and Devon Kay & the Solutions, and a reading from "Everything You Ever Wanted to Know About Zombies" author Matt Mogk on Sunday, Oct. 30.

All photos below by Joseph Erbentraut for HuffPost Chicago. 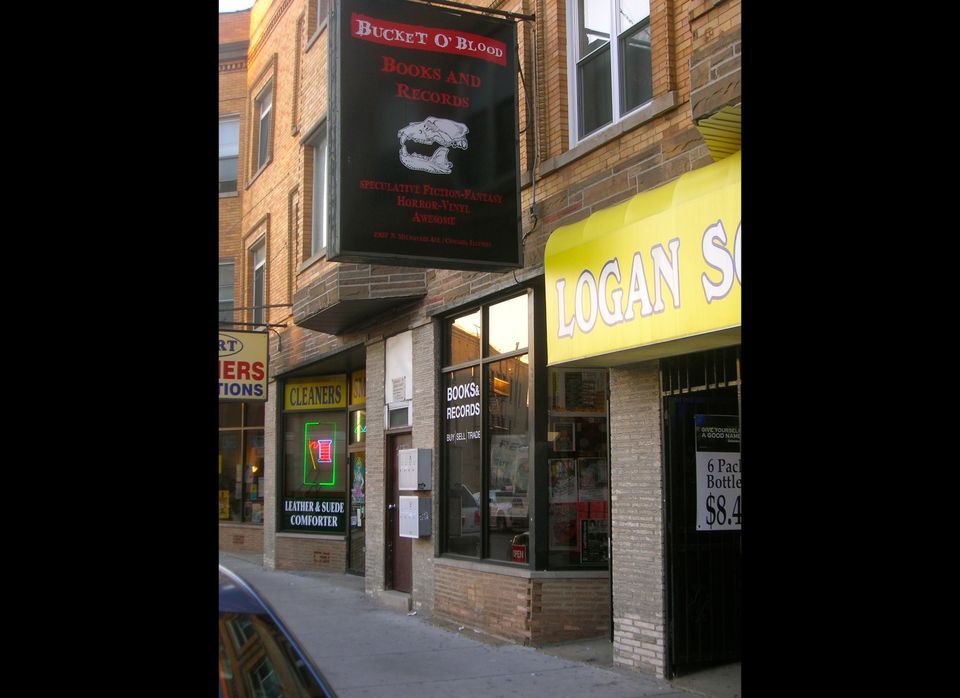