I'm the kind of mom that sets timers for technology. Both my kids get limited game times. I can face the facts. This is a technology driven world. I'm trying help them develop boundaries around how much tech time gains their attention. I'm no expert. I'm still working on this myself. As someone who works from home I have access to all the gadgets, all the time. I work at putting my phone down more often. I want to play with the kids at the park instead of sitting on the sidelines eyes on screen. I see technology in family, as a distraction that if not guided holds us back from connecting. I know I'm not alone on this one. Even the great technology leaders have been known to set similar boundaries.

In 2010 Steve Jobs told New York Times columnist Nick Bilton, "We limit how much technology our kids use at home."

I do let my son have access to his iPad all day and every day. Here is why. 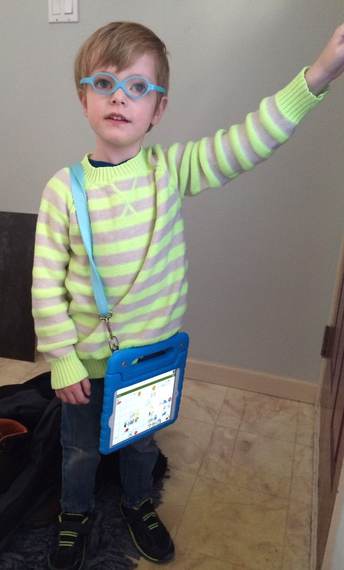 It seems like so long ago that we were watching and paying attention to the typical language development of my son L.

I'd look in his eyes when he was a young toddler and I knew those eyes had so much to say. The words just weren't coming. Despite my longing for a silly story or those big questions our kids tend to ask us like "Why is the sky blue?" or "Where do we come from?" (Don't kids know it's hard to get philosophical between bath time and bedtime). A reality was setting in that he couldn't communicate his basic needs "I'm hungry, tired, scared".

I remember buying a learn sign language book. I heard it helped children learn to speak. He was little and maybe a bit delayed, but it would come.

He learned to sign the request "more," and we used it a lot. I was ecstatic when I saw that he understood that it was a tool. He could use it and get what he wanted. He was starting to utter one-word requests here and there "milk," "more," "car." Sometimes these requests were verbal. L was always making some kind of noise babbling, humming, and singing in his own language. It started to be repetitive and he could be making the same string of sounds for hours.

Melt downs, tantrums, epic battles and self-harm followed. I'd cry. It was hard to imagine how trapped he must feel not being able to get across his point, his request, his funny story.

At first I thought maybe speech was an isolated concern. There were other areas of development that started to show a similar path. L was diagnosed with Autism and significant developmental delays as a result. That was early on our road to communicating. This mom went through a major shift. Something like defeat, acknowledgement, awareness, research, seeking help, getting help, to empowerment. We had a lot of work ahead of us. We needed to teach L to talk, and big time.

That was almost three years ago now. We've been working with Speech and Language professionals ever since. The early testing was brutal. In early testing I couldn't even get him to look at the therapist. To say the lump in my throat was choking me at the time is an understatement. I'd walk around with this basketball size lump of emotions. It would release at unexpected times. I prayed nobody could see my worried eyes, or ask me "How are you?" I couldn't control the frenzy of emotion that would follow. The unknown. The new. It was all so new. Besides the fact that parenting young children was new to me, I entered the world of Autism. 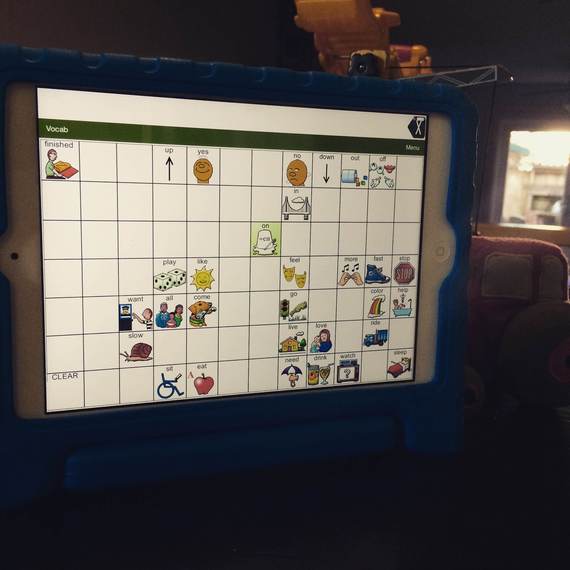 I always say that L is learning to talk when anyone asks. I realize that maybe I am phrasing this all wrong. L communicates differently, but he does communicate. L was good at showing me what he wanted by dragging me around and putting my hand on the item. He wouldn't point.

Fast-forward a couple years. With support and therapy he has definitely experienced growth in his communication skills. He still has few words, but they are coming. It's exciting to hear him model words that I say. He tries hard to speak, and he tries hard for me to understand him.

We work with an amazing team. Our speech and language pathologist suggested we assess for a trial of the AAC For Autism LAMP Words For Life device. As soon as L got his hands on it he was showing me how to use it. He could use it to request his preferred snack. He could use it to suggest the car instead of walking to school. Which threw me off because I was dragging the kids by foot to school and now he could tell me "Go," "Car." I knew this tool was working. We are still in the beginning but our experience so far has been promising. His verbal language has increased, and he is articulating words. I'm confident we have found the tool for us.

Language acquisition through motor planning is still new to us. We have seen the benefits for L and for us as a family. I couldn't imagine a day without it. He has gone beyond basic needs communicating and is starting to engage just because. This little robotic voice pipes up from the back seat of my car along side my daughter's random thoughts and requests. I now have both my kids able to bark orders at me from the back seat and I love it.

It's gratifying as a parent to see the tools and work we are doing playing a role in L developing his language and communication skills. 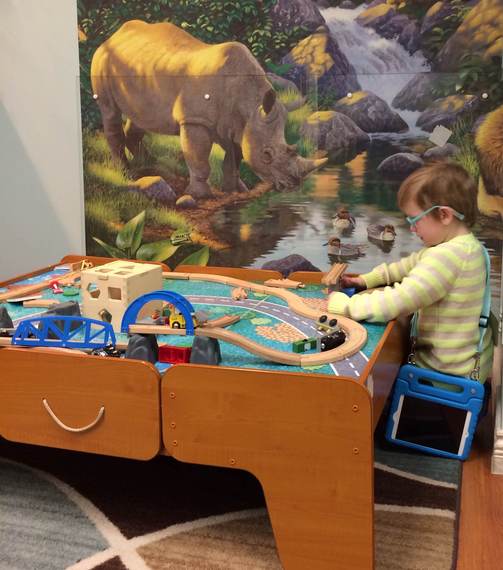 More:
autism awarenessiPadParentsAutismFamily
Newsletter Sign Up
Raise the kind of person you'd like to know
Subscribe to our parenting newsletter.
Successfully Subscribed!
Realness delivered to your inbox

Finding strength in the vulnerable spaces of parenting, and business leadership.