There are moments in a mother's life when she experiences children who pay no respect to boundaries. My second child was THIS Child.

He was a Houdini.

In one vacation he stood on Elvis' Grave, AND he scaled over boulders in an attempt to come face to face with a dinosaur!

He was my adorable child. People stopped us to comment on his bright green eyes that stood out with more long, dark lashes than Maybelline could fit in a mascara tube. He had bouncy curls highlighted with strands of gold. He had Cupid's lips and pudgy cheeks. But inside his cuteness overload, he was hell on wheels.

He was a child I couldn't take my eyes off for a moment. We traveled, we did things I felt children should do.

On a trip across the country, when he was 18-months-old, I realized HE was why signs were posted that said, "Do Not Touch", "Keep off Display", and "Stay Behind the Ropes".

My dad was with me on this particular trip. I was also traveling with my four-year-old old and, as mentioned, my fiery 18-month-old.

The four of us stopped in Memphis, Tennessee at Elvis Presley's Graceland. It's a tourist area attracting more than 600,000 visitors a year. My four-year-old loved Elvis and, as his mother, I wanted to give him the opportunity to experience Elvis in a more visual manner.

We were in line at the gravesite of Elvis.

If you haven't been to Graceland, Elvis' grave is in a circular plot of land with a fountain. There is a walkway, like a round-a-bout, allowing visitors to pay their respects to Elvis and his parents' grave and exit without disrupting the line. A short, rod-ironed fence serves as a barrier between fans and the four burial sites.

As my four-year-old was wowing his grandfather and me by regaling fun facts, my 18-month-old disappeared.

I heard gasps a little further up the line, and I glanced in that direction.

He had squeezed through the rod-iron gate, crossed the graves of Elvis' parents and was STANDING on top of Elvis Presley's grave.

I moved up the line and had to bribe my child with Circus Crackers to get him within reach where I could grab him. Eyes were burning my neck and there was a murmur of whispers judging my parenting.

Cross-country a week later, while visiting a dinosaur exhibit in Utah, I bent over to tie my four-year-old's shoes. When I stood up, my 18-month-old had scaled the faux boulders and was heading into the exhibit to pet the dinosaur. 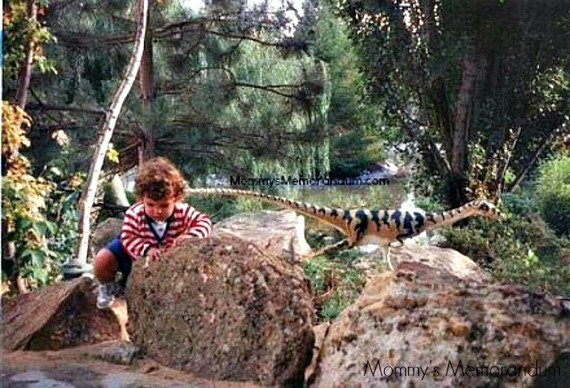 The climbing over the large boulders had slowed him down enough for me to snatch him out of the exhibit. My dad snapped a photo for us to remember the occasion.

I learned a lot about myself raising him. I spent many nights in my room crying that I was failing as a mother. There was frustration in trying to, what I now suppose was, confining him. He's 23 now and MUCH calmer.

He still marches to his own drummer, but fences, for the most part, still don't hold him back!

More:
ParentsElvis Presley
Newsletter Sign Up
Raise the kind of person you'd like to know
Subscribe to our parenting newsletter.
Successfully Subscribed!
Realness delivered to your inbox