The funniest woman I've ever known is my college roommate, Beth Wareham. In her new book with co-author, Jason Davis (a Blood, O.G.), a Westchester County housewife and a Harlem gangbanger get it on in hilarious circumstances. It's a beautiful thing, y'all. 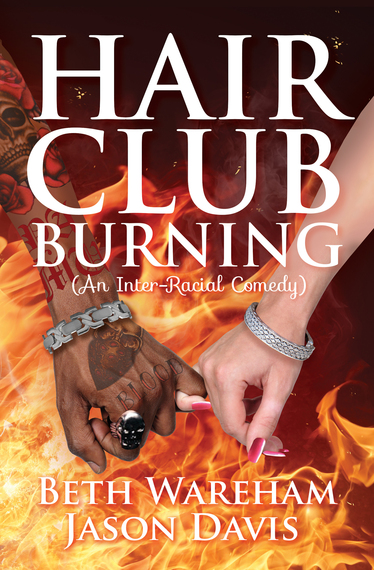 Another beautiful thing? The real-life story of Beth and me.

I was one angry young woman by the time I met Beth my senior year at Vanderbilt University in Nashville, Tennessee, where I'd arrived freshman year a sheltered, naïve, seventeen-year old from an all-girls high school with a progressive bent.

Y'all see, society on the Vanderbilt campus in the late seventies didn't work the way my Sunday School teachers at East Ridge Baptist Christ in East Ridge, Tennessee, told me all my life that they did, as in the song that goes "Jesus Loves the Little Children. All the children of the world. Red and yellow. Black and white. They are precious in his sight. Jesus loves the little children of the world."

Jesus may love them, but in college I learned that people do not love all the little children. A codified social system based on the Greek letters of the alphabet stacked everybody up in fraternities and sororities against one another according to gender, race, and creed. And that's for starters. There were other markers for dress, wealth, and social standing. The Greek system that dominated social life at Vandy, which was accepted as the way things were, awakened this little believer, who had almost zero prior knowledge of sororities and fraternities, to the injustices in the world.

By senior year, heartbroken and pissed off at the world, I was living in a single in the stoner dorm, the result of two life-altering decisions I'd made junior year.

Number one, I'd deactivated from my "exclusive" sorority following a year of acting out after an officer told me my friend, who was rushing sophomore year, couldn't join our sorority because she was Jewish and wouldn't represent our Christian ideals. Angry, aghast, shocked that this officer had gotten an entirely different message than I had out of Sunday School, I never participated in the sorority at the level they required again. After a year of cutting meetings, of not caring, they asked me to leave. I'm still ashamed of myself for not quitting that day I found out what all my former sorority represented, for childishly acting out instead of protesting and demanding answers.

Number two, my pivotal junior year, I switched majors from Molecular Biology, from being a pre-med, to English. But that's a longform story for another day.

Thus, long story short, I wound up alone, in a single, in the stoner dorm senior year -- gladly rid of my sorority status, but bittersweet about leaving my group of pre-med grinds.

That fall John Lennon was shot. I was eating next to nothing after a nasty break-up with my longtime, on-again/off-again boyfriend over my summer romance in London with an Irish boy. I was listening to the Steve Winwood album "Arc of a Diver" over and over. I visited my high school boyfriend in Chapel Hill in a lame, failed attempt to recapture my past. I wrote an emo-style paper for an independent study on e. e. cummings that my professor called "oddly elliptical." A cute frat boy, one with a mind and a heart, in my Medieval Literature class came to visit me in my single, but only wanted help with his homework.

Right before Christmas, a friend and former roommate -- bless her -- invited me to live in her suite with five other girls the next semester. I'd be in a double with a girl I'd never met. "Yes, please," I'd said, afraid that I was living in an unhealthy way, knowing I had to stop reuminating on my lost pre-med status, my nasty break-up, my lost Irish boy, the stigma of having de-activated from my sorority and take on the real world that did not love all the little children. I was a privileged person -- a young, educated white woman from a supportive family that'd risen in the world by starting a business. Moaning and moping anymore about my "aloneness," I felt, would've been ridiculous.

Enter my new roommate. Beth Wareham. A six-foot-tall Texan outfitted with a gorgeous tan, a mane of blond hair, and a sharp-shooting wit that mowed down frat boys within a hundred yards.

That last semester at Vanderbilt, I still felt the sting of being a persona non grata in my former circles since I'd lost my labels, since I didn't dress to conform in preppy pink and green, since the whole scene pissed me off, but I have to hand it to Wareham. That girl was my tonic -- this little nonconformist's bodyguard, the first badass I ever knew. With her, screw 'em, I was back to walking the brick byways of Vandy with impunity. Y'all see, Beth was her own woman, had never pledged a sorority, was solely the product of her convictions; and I was proud to be her new roommate and friend.

After graduating, I moved to Boston to work in publishing, an idea that'd germinated during my hiatus in the stoner dorm. Beth joined me for a year, but then moved on, on her own journey, ending up in Manhattan in publishing, where she lives today with her husband, a former music critic for The New York Times.

For the past decade Beth and her co-writer Jason Smith -- a Blood, O.G., as in the gang in Harlem and the Bronx, now a writer and father who mentors at-risk youth -- have been friends. Beth says she and Jason cause a bit of a stir out together in New York. Feeling the camaraderie, the empowerment I'd felt with her, I imagine them striding the concrete canyons of Manhattan -- friends, blood brothers -- slaying the haters.

In Beth and Jason's stylishly hilarious new book, Hair Club Burning: An Interracial Comedy, Marianne -- a real housewife of Westchester County -- takes down her low-down, no-account, bastard-of-a-husband with the help of Jay -- a Harlem gangbanger -- who perhaps needs Marianne as much as she needs him. A match made in heaven, Marianne and Jay burn the house down. Y'all will be amused, delighted, shocked, enthralled in the company of these funny-as-hell badasses, who discover love is, indeed, color-blind.

Come for the wisecracks and the sex scenes. Stay for the message.

"Jesus loves the little children. All the children of the world. Red and yellow. Black and white. They are precious in his sight." Amen.