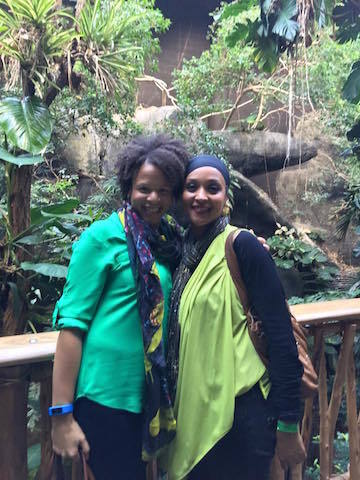 As I rushed out the house to make an appointment in downtown Atlanta, I didn't think twice about wearing my brightest-colored headscarf. It was a couple of days after Donald Trump made racist comments against Muslims, but I was not afraid of being visibly Muslim, especially in a city full of black folk.

Yes, I have high expectations when it comes to African Americans and Islamophobia. I do not expect black Americans, who experience hate crimes more than any other group in this country, to turn around and treat with contempt another group that does not look like the white majority. Further, I would hope that African Americans, painfully aware of how the dominant media has historically vilified black people in this country and around the world, would see through the lies, biases, and distortions of the media and of racist individuals when it comes to Islam and Muslims, here in America and abroad.

Realistically, however, as we know from Ben Carson's Islamophobic comments, the high standards to which I hold black Americans do not always hold.

Still, the unique growth of Islam in black communities, especially in the mid-to-late 20th century, makes black Americans strong allies in American Muslims' fight against Islamophobia. Largely because of Elijah Muhammad's Nation of Islam, the novel economic, educational, and media enterprises it brought to poor, urban communities, and the charismatic personalities of Malcolm X, Muhammad Ali, and Louis Farrakhan, Islam came to be forever associated with black power, freedom, and justice.

And there's more to black people's respect for Islam. The historically high rates of conversion to Islam in black communities meant that it was common for an African American family to have at least one Muslim, especially in urban centers like Chicago, New York, and Philadelphia. If it wasn't your daughter who joined the Muslims, it was your cousin.

On the day I wore my bright pink scarf in a climate rife with Islamophobia, I learned once again, after having written two books about Islam in America, that Islam continues to stand strong in black America, and especially in black families.

As I waited for my appointment, the time came for me to pray my afternoon prayer. I found a quiet corner a few feet from a bench where an African American woman, my mother's age, played with her grandchild. "Hello," I politely summoned her. "Please excuse me, but I just wanted to let you know that I am about to pray in this corner." She responded, "Oh, I'll move." "Oh, please don't move," I answered. "I just wanted you to know what I was doing so you wouldn't feel uncomfortable."

"I know exactly what you're doing," the woman said reassuringly. "My two sons are Muslims. I respect you praying."

The Christian woman's words confirm that Islam has continued to grow in black families, where dialogue, understanding, and ultimately love for kin make African Americans who are not Muslim stand up for us to pray and practice our faith visibly without fear of violence and hate.

I know firsthand the mutual love and respect between Christian and Muslim family members as I have prayed hand in hand with Christian relatives at Christmas brunches and Thanksgiving dinners. At my grandmother's funeral, I too cried to "Amazing Grace" after I spoke on her legacy before the Baptist congregation.

My parents brought Islam to their Christian families when they joined the Nation of Islam in 1971. In 1975, they followed Imam W. D. Mohammed, the son of Elijah Muhammad, to Sunni Islam. This is the Islam in which I was born and raised, the Islam that taught the teachings of love and mercy lived by the Prophet Muhammad, and the Islam that connected me with Muslims across the globe, from Senegal to China.

This, too, is the Islam that my cousins and aunts and uncles have come to know, respect, and even admire. I am undaunted by the ignorance and hate of Islamophobia, and largely because I know that my people -- my family -- will stand up for me in the spirit of love and justice.

Author of American Muslim Women and Women of the Nation: Between Black Protest and Sunni Islam