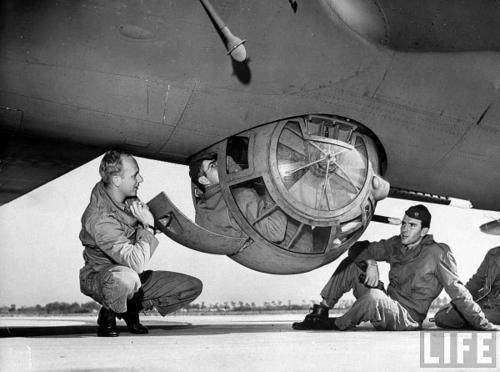 
I wasn't the brightest kid. I grew up believing the tale my father told me -- that I had spent World War II being toted around on his back. It wasn't until I was about 9-years-old that I realized the impossibility. I had been born in August of 1947, years after the war was over. And my father wasn't traipsing around Europe on foot in the Infantry, anyway -- he was a ball turret gunner in The 8th Army Air Corp, operating in a confined space.

The ball turret gunner was one of the most dangerous assignments in World War II. Ball Turret Gunners on B-17 bombers were protected only by a glass bubble jutting out from the bowels of the plane. Permanently fixed and unable to be retracted, there was no hiding from enemy attack. It was an enclosure that at any time could become an airman's coffin. And often did.

Crews on a B-17, fondly referred to as "The Flying Fortress," flew enemy raids against Nazi Germany from 1942 to 1945. Originating from air bases in England, the B-17s left to attack enemy targets in broad daylight because The Air Force believed in precision bombing -- bombing to hit a specific target. This was only possible to accomplish in daylight. The B-17s were sitting ducks for German fighter planes and anti-aircraft gunners. It wasn't until 1944 that fighter escorts were deployed to accompany them on their missions. By that time, thousands of airmen had perished over the skies of Europe.

Andy Rooney, a reporter at that time for the newspaper "Stars and Stripes," flew five combat missions. Rooney said he couldn't put his finger on why the B-17s were so great but "they captured the imagination of the American public and came to symbolize the great struggle taking place over Europe ... The B-17s brought the men home when they didn't think they had a prayer. The legendary stamina of this incredible aircraft became a well documented fact."

Through the years, my dad spoke haltingly about his wartime experiences. "I flew my first mission on a B-17 as a ball turret gunner with the 8th Air Force at the age of 21," he tells me while driving me to school one morning. "We had a 10-man crew and we were all terrified."

Size mattered when it came to selecting ball turret gunners. Airman in the bubble were hunched over almost in a fetal position, knees up to chin, machine gun controls inches away.

I was 5' 8" -- a little tall for the turret, but I accepted the assignment, which some deemed as a suicide position," my dad points out.

On days that missions were flown, the crew was up at 2 a.m. preparing their aircraft, cleaning their guns, grabbing a quick breakfast, getting briefed on the impending mission. After that: three hours of circling the airfield to get in formation -- an absolute necessity to protect themselves against German counter attack. The formation would be maintained on the way over, during the raid, and on the entire way home.

By the first sign of daylight, the flying fortresses were on their way. Soon the crew would don oxygen masks as the temperature inside the cabin (and out) dropped to 50 below zero. Flight suits were heated and insulated but the crew often reported icicles on their eyebrows and frostbite around their mouths.

Pilots navigated. Gunners protected, constantly twisting and turning -- checking for enemy fighter aircraft. The first gunner in any position to spot an enemy plane alerted the rest of the crew via the plane's intercom system.

We learn details as time passes. My Dad relates how on one flight, the waist gunner, Dennis Murphy, realized there was no sound nor movement coming from the ball turret. Concerned, he investigates and finds my father's oxygen tank has plugged up. "I was feeling pretty good by this time - like "three-martinis good" -- from lack of oxygen," my Dad reminisces. "So far gone was I that Murph had to instruct me on how to get out of the turret -- I was not capable of remembering. He saved my life and up until his death, I kept in regular contact with him."

About lunchtime, the B-17s hit their targets.

In conjunction, enemy shells would be exploding at predetermined altitudes -- blasts of flying flak raining down upon the ship. Deviating from the course and getting out of formation was sure suicide because German fighter planes were always lurking in the clouds, ready to pick off a random plane.

Another time, we glean a little more. My Dad relates, "I saw one of our planes -- right next to me -- shot down. It lost two engines and couldn't keep up. Veering off course, heading for Sweden, I watched as it was blown up. It was a sickening site."

Airmen badly wounded from flak would die without immediate medical attention at that altitude due to shock. So, many were tossed out in parachutes, in the hopes that German troops would give them emergency care before shipping them off to P.O.W. Camps. Injuries from flak accounted for more loss of life among the B-17 crews than any other factor.

After dropping their bombs, the B-17s headed back to England. To warm beds. Hot meals. Poker games. And once very 30 days, a three or four day pass to London (and the British pubs).

The Brits however weren't totally enamored with the boys from the U.S.A. As they said, "The Yanks were overpaid, oversexed and over here."

But if the Brits were ambivalent, the Dutch more than made up for it. In 1945, towards the end of the war, a newspaper article told of planes flying over a tulip field in Holland on their way back from a mission. In the tulips were spelled out the words, "Thank you Yanks."

My Dad says "I saw the tulips spelling out 'Thank You, Yanks.' It was the best sight in the world -- second only to spotting the famous White Cliffs of Dover late in the afternoon after completing yet another harrowing mission."

Over twelve thousand B-17s were built by Boeing. Thirty-five hundred were shot down over Europe. All but a handful have been consigned to the wrecking yard. A few are still flying today.

Only three ball turret gunners received the Medal of Honor.

Nothing my father had related to us over the years prepared us for the terrifying reality of his position.

"The first in/The last out
The most exposed/The least protected
. ... The silent wing warriors."