If you're reading this after December 14th, I'll be on holiday alone in Chad, a landlocked country that sits between Libya, Niger, Nigeria, Cameroon, Central African Republic, and Sudan (the phrase, "With friends like these, who needs enemies?" springs to mind).

I won't be alone, exactly. When I arrive in the capital, N'Djamena, I'll meet up with the two drivers I've engaged to drive the two 4x4 vehicles I've hired, as well a mechanic to ensure said 4x4s operate, and a local guide/translator, who hopefully knows the desert very well. Since we'll be camping for the duration, and there are no tourist facilities, nor any infrastructure of any kind once we leave the capital, I've also engaged a cook, who will join us to prepare meals for everyone. But I'll be alone in the sense that I won't be going with a tour group or friend.

I've been obsessed with the Sahara since learning about it in grade school. At the time my little brain couldn't conceive of its vast size. I still have trouble. I read and understand the words, "surface area of 9,400,000 square kilometers," "comparable to the respective land areas of China and/or the United States," but for me it's a little like trying to grasp space. I get it, but I don't.

My first taste of the Sahara desert was from the air a few years ago when I was landing in Morocco. I was staring out the window when Earth's normal colors and evidence of life suddenly gave way to what looked like an endless blanket of snow. It was white as far as I could see. Only it was the Sahara, not snow. I was overwhelmed with desire to go. 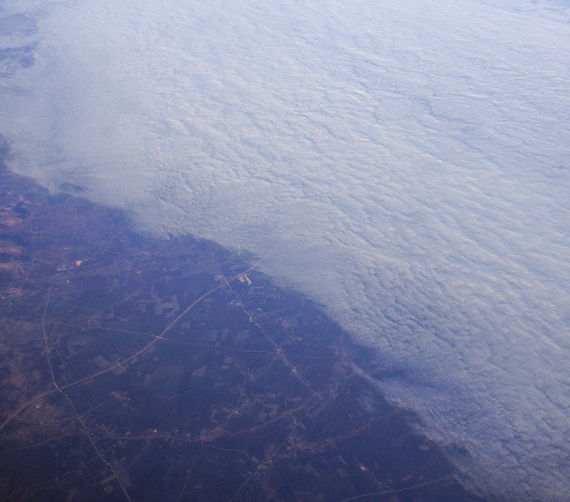 (Flying into Morocco... the Sahara below)

Soon after, I visited Tunisia, ostensibly to see the whole country (which I loved), but expressly to visit the Sahara. I stayed a day and overnight at a tented camp on the edge of the Grand Erg Oriental. Walking out alone into the Sahara desert, and feeling and seeing the infinite remoteness of its vast, empty, silent, golden dunes was like staring up at the night sky when you're someplace isolated and the sky's just so heavy and thick with stars, which seem to proliferate right before your eyes, you feel almost meaningless. It was magnificent, powerful, humbling, and frightening all at the same time. 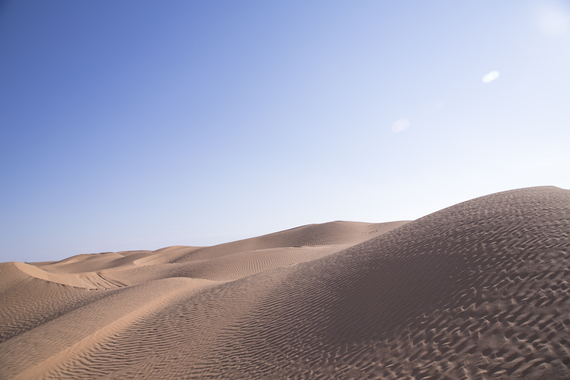 (The Grand Erg Oriental in Tunisia) 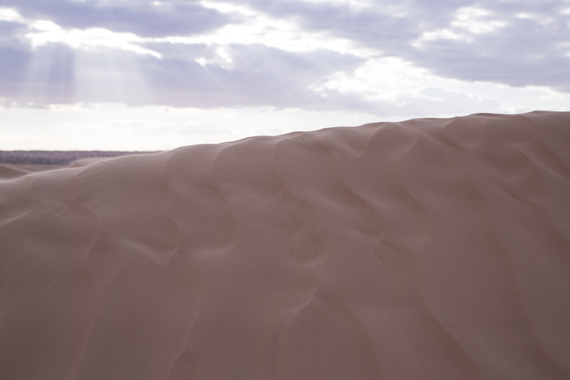 (The Grand Erg Oriental in Tunisia)

That night I spent in the Sahara, March 13, 2012, it poured rain. I stood outside in the dunes and allowed the rain to wash over me. I was told it was the first rain in the Sahara in 10 years and likely wouldn't rain again for another decade. I was the only guest in the camp that night - it had been packed to capacity until the day I arrived, and was booked solid again from the day I departed. The staff at the camp was convinced I was magic, having brought them the much needed, and aberrant rain. 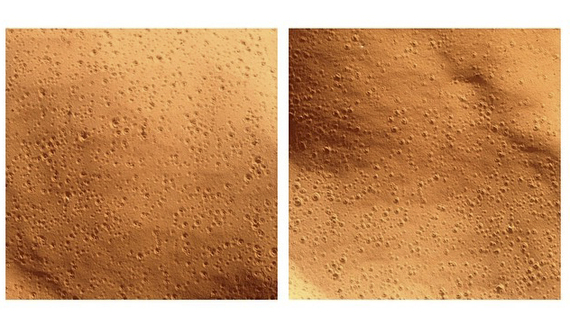 (Raindrops left behind in the sands of the Sahara)

The Ennedi Plateau, in the southeast of the Sahara, looks extraordinarily beautiful from what photos I've seen. Beauty that is truly otherworldly. Like the landscape I witnessed when I was in Namibia, what's in the photographs - some of the world's largest and most spectacular natural arches and sandstone formations - is so at odds with everything I've known, it's difficult for me to process that it exists on the same Earth I do. I can only imagine what it will look like in person.

Aside from a week spent camping in the Nouabalé-Ndoki National Park in the Republic of Congo, an overnight trip in the Hudson Valley with friends 15 years ago (the hardest part of that trip was opening a bottle of wine in the dark), and an aborted night camping in my backyard when I was a kid (it was cold so I gave up around 9 p.m.), I don't camp. I'm not even sure I like camping.

But in Chad I'll be camping for 18 straight nights. Outdoors! I had to buy a sleeping bag for the trip! There won't be any water (because it's the Sahara... and it's too difficult to bring with us from the capital). So we'll rely on wells along the way for drinking water, which we'll purify, but this means I can forget about showers or washing of any kind involving water. Can you imagine what my curly hair will look like after 19 days without even wetting it? (I'll take photos.) I practically look feral after one night. I'm so preoccupied with my hair I can barely bother to worry about the other ramifications of a waterless, toilet-free world (not to mention, zero internet or electricity).

The temperature in the Ennedi ranges from the 90s Fahrenheit during the day to freezing at night, so based on the few clothes I've packed, you'd be hard-pressed to guess whether I'm heading to Antarctica or Aruba. My carry-on duffle is packed with 16 (!!!) pounds of JUST gear! Think: TOILET PAPER (LOTS of toilet paper), cleansing pads, solar charger, power inverter to charge my laptop off the jeep battery, camera and gear, portable battery packs, back-up power, pillow, travel towel and blanket, and so on. I could basically leave home forever and be fine.

Since deciding this past June to go to Chad - which like all destinations I choose was more or less on a whim - I've been asked the same question a hundred times: aren't you scared? To which I respond, "I'll let you know when I get home."

It's a funny thing about fear, what scares people and what doesn't. Last night - no exaggeration - I screamed aloud as if in pain ¬¬when an errant (I hope) GIANT cockroach (water bug?) came running into my bathroom while I was washing my face. I screamed unabatedly as I indecorously beat the bug to a pulp using a magazine (sorry, cockroach). Since the "cockroach incident," I've felt nervous about going into the bathroom. While normally I have no qualms using it with the lights turned off, I wouldn't dare do so now for fear Cockroach's angry orphaned relatives may be laying in waiting to seek their revenge.

As I've written about often, my predilection for travel runs deep, especially travel that eighty-sixes my comfort zone. I love-hate the risk and uncertainty that come with each new life-changing adventure I throw myself into. But I couldn't live without them. My excitement for Chad is tinged with pleasurable anxiety.

Last week, and in recent months, terrorism by Boko Haram has rocked Chad, prompting most (if not all) Western governments to advise against travel to the country. I hate when that happens.

According to Lonely Planet, "Chad is Africa for the hardcore. At the moment terrorism and violence - by Boko Haram in the south, and from conflict spilling over from in Libya in the north - has put the dampers on even the most ambitious travel adventures here - it is simply considered too unsafe to visit." But what else are they going to say? If I listened to all the State Department and guidebook warnings, there'd barely be a country left to visit, and I'd be forced to move out of New York City.

As Helen Keller, who was both deaf and blind, once wrote, "Security is mostly a superstition. It does not exist in nature, nor do the children of men as a whole experience it. Avoiding danger is no safer in the long run than outright exposure. Life is either a daring adventure, or nothing."

I just hope there aren't any giant cockroaches.

Happy holidays to all! See you back here again when I get home January 2, 2016.