During the third trimester of my pregnancy with Ava, I was woken up every morning at 6:30 a.m. with the "Calypso" text notification sound, a sort of Caribbean upbeat tune that did not at all fit with the frigid winter freeze that I was living in at the time. Before I even opened an eyelid, I knew the messages were from my sister, Sarah. She woke up every day at 6, and, while eating a breakfast of egg whites and turkey bacon, would slowly type me messages loaded with pregnancy advice, or things she saw on her favorite show, A Baby Story. Sarah loved babies; she wanted at least 10.

There was an ironic element to this aspiration, as she could never have babies. The chances of her bearing a child were slim to none -- closer to none. She was born with a dual diagnosis of Prader-Willi Syndrome (a genetic disorder causing, among other things, an insatiable desire for food which often results in obesity) and cerebral palsy (contributing to slight cognitive delays and low muscle tone, thus causing an inability to walk unassisted). As a family, we never told Sarah that her future would not turn out the way she so happily imagined it would; collectively, we couldn't see the point. Just because a dream can't come true does not mean it shouldn't be dreamt. 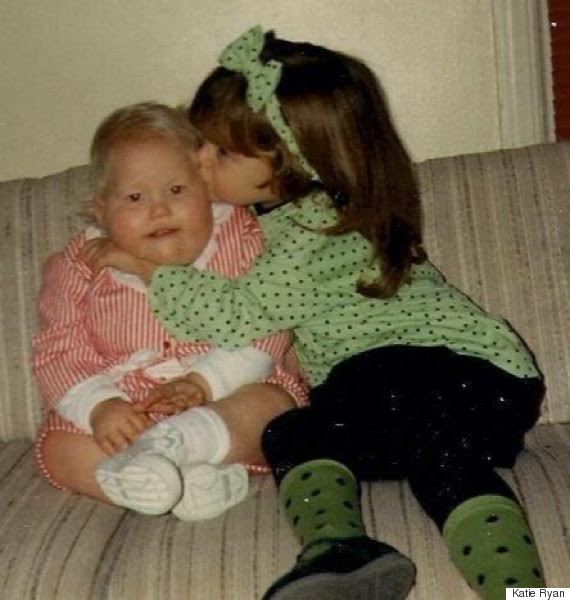 Sarah and Katie at 2 and 5 years old

"Ava I am so happy to be your aunt," she wrote to Ava before she was born. "I love you already, more every day. You come over any time you like. When you are sad about something, me and your mom and dad will always be there for you."

When Ava was born, the hospital had gone under a maternity ward lockdown due to the swine flu virus, so Sarah couldn't come in the room to meet or hold Ava like she'd anticipated. I wasn't sure how she'd react, considering that Sarah could become overly emotional when triggered by certain situations. My husband, Daniel, proudly held the sleeping Ava up behind the window of the nursery, and Sarah began to cry. I felt distressed that the hospital staff would not let her back into the unit, causing her to become upset, but she later told me, "Kate, I was just so happy to see Ava that I cried."

Life with Ava wasn't easy at first; she was up most of the night. Sarah and my mom would watch Ava during the day, allowing Daniel and me to get a few hours of rest. I remember finding Sarah, wheeled up to Ava's bassinet, rocking her back and forth while Ava slept. She would be singing a nursery rhyme over and over again. "She's been doing that for two hours straight," my mom would tell me. 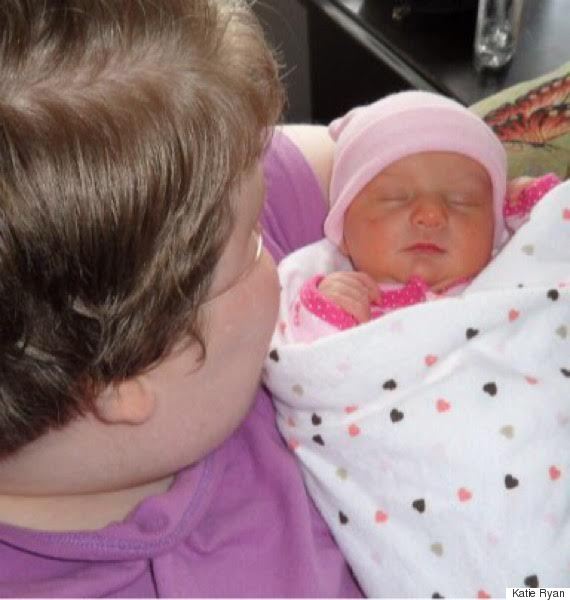 Ava loved Sarah. She doesn't remember her now, aside from stories, pictures and videos. She would sit with her and play with stickers or play dough. Sarah, at 22, had the look of a big, sweet-faced baby. Our family and friends called her "Chew" because she was so adorably plump you just wanted to chew on her. When she began to get sick and go to and from the hospital, the nurses used to fight over who got to take care of her, calling her "our baby of the ICU."

Sarah was kind and gentle, and also uproariously funny. She had moments when she made me laugh to the point of tears because of her natural wit and take on the world. For countless reasons, I was happy for Ava to grow up with an aunt like Sarah. Not just because Sarah seemed to spark immense compassion and understanding in the people who met her, but also because she was hilarious and fun to be around.

One day, I found Sarah rocking Ava and noticed that the tips of her fingers were a turquoise blue color. Sarah then began to complain of an intense headache, unusual because she so rarely complained about anything. She was taken to the hospital, where she was diagnosed with an increased level of carbon dioxide in her blood, the result of obstructive sleep apnea. Sarah was placed on life support. Thus began a year of Sarah living in and out of the hospital, with 12-hour nurse care when she was home (the other 12 hours were provided by my parents) and an eventual tracheostomy (a surgical procedure where a tube is placed in the neck, allowing her to breathe more easily). We still came to visit almost every day, and Ava and my sister still played. Sarah, despite being in extreme discomfort, would always light up when she saw her niece. Time passed and Sarah seemed to be doing better; she was home for longer stretches of time, and I anticipated a recovery was just around the corner.

One balmy August night when a chain of storms were rolling in, I had an odd feeling; it was undefinable and acute. I stopped by my parents' house and found my mom outside smoking a cigarette, looking unusually unnerved while thunder roared to the west. She told me that Sarah was in pain, that the ambulance was on its way.

I went into my sister's room and found her looking heavily distressed. "You OK?" I asked her, and she shook her head no. I stepped back to let the EMTs through. That was the last time I ever saw her.

She was rushed to the hospital, where they found out she had a tear in her intestine, and the onset of sepsis (a serious bloodstream infection that can cause organ failure) had begun. At 3 in the morning, Sarah went into septic shock and the doctors told my parents that there was nothing more they could do. Sarah kept slipping in and out of consciousness, but she would not succumb. Every time she would flatline, she would come right back. My mother put Sarah's head in her hands and told her it was OK if she went, that it was now time for her to run and play and do all the things she couldn't do in life. At my mother's last word, she was gone. Doctors and nurses lined up -- they had spent the last year providing Sarah with care. All were quietly brushing tears off of their cheeks.

My parents had formed an allegiance for 23 years devoted to Sarah's health and comfort. We used to joke that Sarah was my mom's "third leg," because my mother refused to go anywhere without her or deny her an experience. All she wanted for Sarah was a normal life, the sort of life that is accessible to so many of us -- so accessible that we deem it boring and set off in search of something else.

"The thing is," my mom told me about a week before Sarah passed, "since Sarah's gotten sick... all of the surface inconsequential things people complain about don't make an inkling of sense to me. They don't even exist in my world."

When someone you love dies, the world alternates between spinning at hyper speed and stopping completely. My initial reaction can only be described as a sharp pain in my heart, an intrinsic feeling that a part of it had vanished. I was perplexed by ordinary people going about their lives, speeding from point A to point B. How can they be doing this when she's gone? Social media angered me, reading complaints from people who had no idea how lucky they were at this moment in time, even if it was raining and they were late to work because someone was driving like an idiot. I know that anger and frustration were not the correct ways to respond to grief, but I was consumed by it. 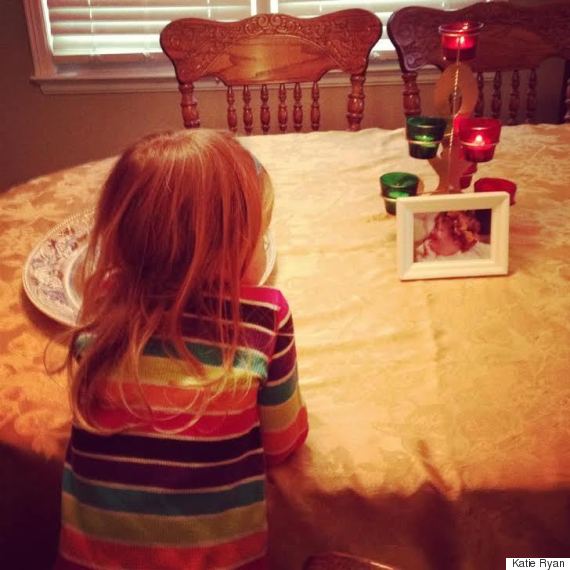 Ava sits by Sarah's photo on the first Christmas without her

For some time there, I thought that I would never be able to escape the loss. That it would haunt me, stealthily hiding in corners and popping out at me when I least expected it, like some sort of mediocre haunted house effect. There was also the guilt, the resounding internal dialogue I had that constantly made me wonder why it couldn't have been me. Why was she robbed of so many of the things that I was given?

Some moments would pass when I would feel so incredibly sad, and Ava would come and tug on my shirt sleeve wanting to play. I would look into her big eyes and be at a loss to refuse. So we played -- we played all of the time. We played while I swallowed down the sorrow. We laughed; we made characters and games and a whole little world for ourselves that existed only between the two of us. It continued long after Sarah's passing. We have never stopped playing and laughing.

That's the thing about healing. It's a little bit like grief in the sense that sometimes you don't even see it sneaking up on you. It starts small and unnoticed and then becomes far-reaching. Ava will never realize how much she helped me get over the loss of my sister. I never placed that on her, nor did I expect her to be my savior. It was simply that she was able to help me see things purely again, to help me realize that I alone had the choice to laugh or cry. To live or to wallow in pain. It's because of her that I began to choose the former.