I still remember that feeling.

It was 1981, and I was 5 years old, strolling with my parents through Walt Disney World Village -- a shopping mecca near Disney peddling everything from Mickey ears to postcards of Cinderella's less-attractive stepsister. All around me white lights sparkled in treetops like tiny Tinkerbells dancing through the foliage. I felt like dancing, too. Something monumental was happening the next day: We were going to the Magic Kingdom.

For the next two days, we raced through Cinderella's Castle, posed with princesses, squealed on swirling teacups. As the years went by, we returned several times, adding Epcot's jumping fountains and giant orb to the mix. Every visit was magical -- and not just for me. My parents' eyes glistened as I posed with Mickey, lit up when the electrical parade marched by, laughed as we sang along to the Country Bear Jamboree.

If this sounds cheesy as hell to you, don't worry, you're not alone. My daughter picked up on that too.

Recently, one of my biggest dreams came true: My family, along with that of my sister-in-law, took the plunge and visited Disney World. I couldn't wait to experience the magic of Disney with my 5-year-old daughter (whom I figured would appreciate it more than my toddler son). According to my parents, you hadn't really experienced Disney until you'd seen it through your child's eyes. I imagined my own childhood wonder reflected in my daughter's gaze, as she greeted glistening princesses and sang along to "It's a Small World" in five different languages (hey, a mom can dream). It was going to be the magical trip I'd been waiting for.

Sadly for Mommy, that magic never quite materialized. My daughter and her cousins only wanted to go on the "fast" rides, like Space Mountain (ironically, the one ride at Disney I'd hated as a kid). They scoffed at the Small World dolls, pooh-poohed poor Winnie. Much to my dismay, the magic of Fantasyland was lost on my child. I couldn't even convince her to stay for the electrical parade. There, in the midst of the "happiest place on earth," I came to a realization that made me decidedly unhappy. My daughter and I were two very different people.

Of course I understand that this is part of parenthood, that it's ridiculous to expect your child to be your carbon copy. I support my daughter in whatever her interests may be. But I would be lying if I said I wasn't disappointed. Maybe it's because, over the years, I've become increasingly aware that I'm a bit different. Given 24 hours with no responsibilities, most people I know would spend the day sipping mojitos on the beach. I, on the other hand, would watch all three Lord of the Rings movies -- maybe followed by a couple of Harry Potters, if time permitted. But I'd had glimmers of hope. My daughter also seemed fond of hobbits and elves, asking repeatedly to watch The Two Towers. I was starting to think I had an ally in the realm of fantasy. A comrade in the world of imagination and magic.

But, in the heart of the Magic Kingdom, these dreams crashed around me. I had to accept that my daughter preferred flying down roller coasters to soaring with Peter Pan. Shopping for jewelry to posing with Donald Duck. Speeding in a racecar to sailing through a pirate fantasy. She would have been just as happy at Six Flags as at Orlando.

And, I suppose that's fine. The important thing is that we were together, having fun instead of working, or grocery shopping, or mindlessly sitting in front of the TV. She was happy, and I was there experiencing it with her. Who cared which ride made her smile, or whether she was enchanted by hundreds of elaborately costumed dolls singing in the spirit of international unity? None of those things mattered as long as she was enjoying herself. Because really, wasn't that the whole idea? And so, I've come to terms with our differences. My daughter is her own person, and that person is brave, daring, and full of curiosity. I'm proud to be her mom. 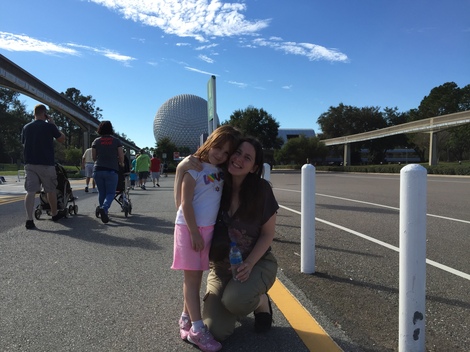