My daughter and I were discussing a friendship. I gently probe, trying to get at the heart of the issue. I ask questions, offer suggestions, even try role playing. Finally, exasperated, she says, "But I'm too nice to say no!"

My little eight year old has figured out, in her young age, in her own words, that she is a people pleaser. Sitting at the breakfast table, unassuming in our pajamas, we have struck life-lesson gold.

Like any mother does, I blame myself. I consider her natural thoughtfulness, her innate gentle and caring ways. Born small and sweet, she has always been a joy. She is a gift. But since she was little, I've encouraged her to think of others first. Think of their feelings, try to be nice, don't be selfish.

I've encouraged her to lean into her natural tendency to defer. Because it doesn't really matter who plays what, who sits next to whom, or who is in charge. Just enjoy being together and play with your friends! Nature and nurture synergy.

As the oldest myself, I should know better. I have demanded too much of her and often disciplined when I didn't get it.

When kids are little, a mom's influence wraps around every part of her children's lives. When it comes to playing, we make them take turns, show them how to share, say things like Everyone gets to be the Queen! and OneTwoThree: Switch!

Eventually, thank God, they learn to play on their own. Thrilled, we grant independence and before long, we shove them out the door and find ourselves now saying things like Work it Out! (And maybe throw in an honest I don't care! or Go back outside!)

Like letting them brush their own teeth, it's only when the dentist calls you over to see all the food casually hanging out on their gums, you realize maybe he isn't actually old enough to do this all by himself. One fastidious child is reliably Up-Down-All-Arounding, while the other is actually just staring in the mirror, sucking the toothpaste off his toothbrush for two minutes, before calling it a day.

Parental supervision is still necessary at this age. And I understand I still have a roll to play in teaching and modeling this type of friendship.

But how does a parent teach a self-proclaimed pushover to stand up for herself with her friends? Like most mothers, I have no idea what I'm actually doing. I start by asking her more questions.

My mom-alarm is ringing. At eight, not saying no means she continues to be Dog every time they play Pet Shop at recess. At 15, not being able to stand up for herself has altogether different consequences.

Teenage risk taking aside, how many times, as an adult, have I felt the cringe of wanting to say no or the panic when I actually need to say no? How many times have I heard nearly identical 'I'm too nice to say no' declarations from women five times her age?

More questions. Do you think only mean people say no? Do friends ever get mad at each other? Is being nice the same as being a good friend?

I don't want my daughter assuming friendship is one sided and that she's being a good friend by keeping up a facade.

She should never be made to feel that her opinion is unwelcome. I want her to recognize how unhealthy it is if she consistently feels a subtle but painful sting when she says no or gives her opinion. Each little sting is almost imperceptible and seemingly harmless, but all together add up to a deep, unhealthy wound to grow just under the surface of the friendship.

I want her to know it's not her job to "fix" bold and controlling friends, young or old. But her responsibility is to identify friendships built on nothing more than the shifting sand of subjective niceties.

Accumulating unsaid no's is destructive and dishonest. Seeming so innocuous, resentful Yes's will betray no one but herself.

She has no problem saying no to me. She has no problem bossing around her brothers. Even her dad will run smack into a foot stomping no every once in a while. In the security of unconditional love, she asserts herself with ease. I want her to feel that same ease in her friendships.

Especially if it means saying no. 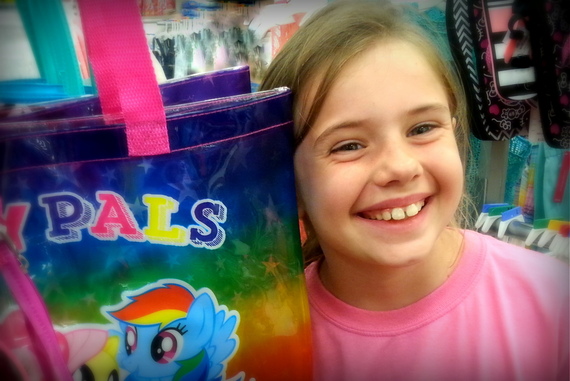 This post originally appeared on Sonya's blog, SpillingOver.
You can also find her on Facebook and Twitter, sharing her heart with a cup of coffee in her hand (or wine, depending on the hour).