My 6-year-old son, Tristan, had soccer practice at the high school. I always brought Norah, my 4-year-old daughter, to practice so she could play with her friend Jill (they went to church together), and a little boy named James, who was the younger brother of one of Tristan's teammates. Jill was a sweet little girl with spindly dirty blond hair and a similar small build to Norah's. James was a very blond boy, with blue eyes and a handsome smile.

Both Jill and Norah were into Disney princesses. I have to doubt that James was into them, but I can say that he seemed to really be into attention, particularly from girls. More or less, he followed Norah and Jill around, doing whatever they asked of him. I often thought about pulling him aside and giving him a bro talk about the Friend Zone, but I never did.

Anyway, the three often played a game called The Prince. This game had many variations. Sometimes Norah acted like she was sleeping on the grass. She'd always hold a dandelion against her chest like it was the rose Snow White held after biting the apple. Jill would cry next to Norah, mourning the loss of her dear friend. And then James would creep up, hunch down and kiss Norah on the cheek. Norah would open her eyes, stretch out her arms and sit up. Then she would say something to the tune of, "My prince. You are so wonderful. You saved me."

Sometimes one of the girls was a monster, and it was James's job to fight his way to the princess and save her. And sometimes both girls took turns dancing with James, slowly and gracefully as though they were at a ball. And when things got really crazy, usually near the end of soccer practice, one of the girls was locked in a tower (usually the tower was behind a bush near the top of some steps leading to the high school).

There were a few things that bugged me about this game.

First off, Norah was always helpless and waiting for a man to save her. I couldn't understand why she didn't get off her butt and slay the dragon herself. I really like the idea of Norah growing up to be an empowered woman, and I hated seeing her appear so dependent on some heroic male stranger.

Secondly, I looked at James as he fought past a dragon to win the hand of my daughter, and wondered what his real intentions were. Sure, he seemed heroic. But I hadn't seen his resume. Perhaps he seemed like a clean-cut hero on the outside, but was actually a player. I mean honestly, how many princesses had he deceived with this dragon slaying bit? Was this a one-time act of valor? Or was it a clever ruse that he used to get into princesses' quarters after hours? Perhaps the dragon was James's wingman, two old barroom buddies pulling a fast one.

I suppose what I am trying to get at is that as I watched them play, I worried that Norah was developing unrealistic expectations. Would she grow up and look for nothing but the handsome Prince Charming, the perfect man, who lived in a castle and rode a noble steed? The prince who was soft but rugged, wealthy but humble, war-hardened but tender, dreamy yet achievable. Would she accept nothing but this contradiction? This unachievable man who would fight a dragon, climb a tower or set up an elaborate shoe-fitting scheme to find her?

Sometimes I wonder if Disney is teaching Norah to long for a shady character from the streets who impersonates a sultan to win her love (Aladdin). Or perhaps an eccentric man who traps her in his castle until she learns to love him (Beauty and the Beast). Or maybe the caliber of man that wanders around the forest kissing dead women, hoping to bring them back to life (Snow White). All of these characters have labels in the real world: player, stalker and creeper.

I've never studied Disney. I'm not a scholar in Disney theory (yes, there is such a thing as Disney theory). This is all based on my own observations. And this is not to say that Disney movies don't teach some good morals. But at the same time they are a cluster of mixed signals and contradictions, many of which make me nervous.

I had a friend after high school. He had dark hair, dark eyes and olive skin. He came from a wealthy family and he drove an expensive car. He was a really good-looking man, and he came across as charming, humble and generous. On the surface, he was Prince Charming. But he really had one interest: to get laid. And he did get laid. Often. He was a player in every cliché sense of the word. He lied. He cheated. He broke a lot of hearts, he took a lot of virtue, and he was proud of it. In my early 20s, I recall being a little jealous of his ability to get women.

He seemed to have some power, or something. But now I see guys like that as predators, lurking for girls like my daughter. I've met many of them over the years. There seems to be one in every town I've lived in, every job I've worked and every university I've attended.

Every time I watch Cinderella with Norah, I look at Prince Charming and see my former friend, the player. I wonder what his real intentions are. I wondered if he was only looking to take advantage of Cinderella. I wonder if it was all a ploy, set up to get all the girls in the kingdom to sleep with him.

I suppose this means I'm jaded. Perhaps I am an overprotective father.

The biggest problem is that I'm no Prince Charming. I mean, I'm a nice guy. I love my wife and my kids. I try real hard to be a good father and husband. But here are the facts: I'm not tall, dark and handsome, and I don't make much money. In fact, I am a stocky 5'11". I work in education. This means I have a white-collar education, but earn a blue-collar wage. I don't own a castle or a carriage, but rather a 1,100-square-foot home, and a 13-year-old S-10 pickup with a dented bumper. I've never been to a formal ball or even a formal dinner. I don't know how to dance. When I think of a nice meal, I think of the Olive Garden. I've worn a tux three times in my life: at my brother's wedding, my sister's wedding and my own. I hated every moment of it. 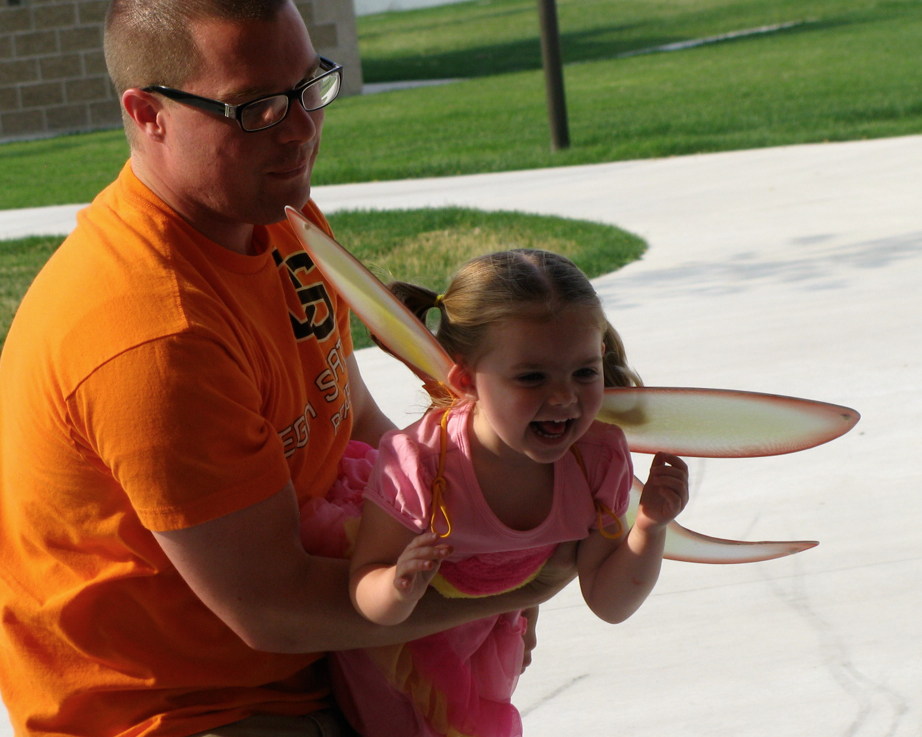