I have no qualms walking around in the buff in front of my daughters. And they do the same with me. We even take showers together if we´re pressed for time. My girls are now 14 and 11, but we've taken baths together since they were born.

I was raised in a country (Spain) where nudity in beaches and pools is normal.

This doesn´t mean we'd do it just anywhere. Now that we're a blended family and because we live in the U.S., I tell my girls to cover up when walking around the house, and of course I do the same. There is such a thing as common sense. If I were with my father-in-law or with my husband's employer, of course I would wear a top.

Otherwise, I'm happy to report my girls and I are comfortable enough with our bodies that, given the chance, we´ll quickly undress and enjoy a wonderful sense of freedom. If we had the chance to lounge around in a beach in Europe we'd be quite comfortable going topless. Heck, I even sleep naked if I can.

In Spain you can see toddlers running around the beach naked and nobody bats an eye. Girls don't wear bikini tops until they really need to, for support, and maybe not even then. Are there oglers and rapists behind a bush ready to pounce? Well no, not really. I mean, I´m sure men look, but when there are so many breasts to gaze at, it´s just not that big of a deal.

The human body is a beautiful thing, and yes, there is a time and place for everything. But breastfeeding in public or baring your breasts at the beach doesn´t need to be sexualized. In Scandinavia families hang out together, naked, in the sauna or the jacuzzi. 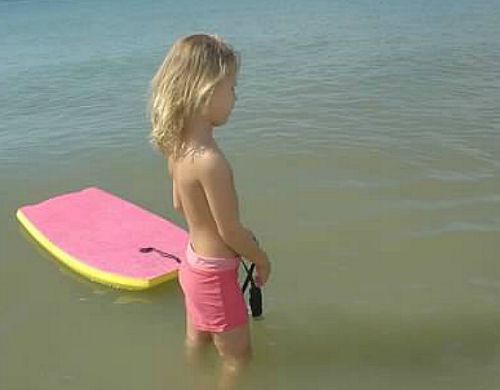 Photo: My daughter at 5, feeling carefree at the beach © Lorraine C. Ladish

My eldest was very aware of this difference between Spain and the United States even as a little girl. So up until she started puberty, she wore her hair in a bob and went to the beach or the pool wearing boy´s swimming trunks. Most of the time she'd be mistaken for a boy, but sometimes people asked. I would say, yeah, she's a girl. Or maybe she'd answer herself. She was, of course, as flat-chested as a boy. This deal of wearing swimming trunks all came about after she was told at four years old, to wear a top at a public pool. At four!

What´s your take on nudity around your children?

More:
nudityraising kidsParenting Parentshispanics
Newsletter Sign Up
Raise the kind of person you'd like to know
Subscribe to our parenting newsletter.
Successfully Subscribed!
Realness delivered to your inbox