We parked at 6 p.m. and walked to the ice-skating rink. My 3-year-old -- almost 4-year-old -- girl was very excited. She saw the skaters and the dancers at the Winter Olympics, and she wanted in.

"When I go in the building, I'm gonna skate in the 'lympics?"

"No no," I said, trying to balance pragmatic honesty and "You can do whatever you set your mind to!" fatherly support. "You're going to go in there, and it's going to be tough at first. You're going to fall a lot. But then you'll get up, and you'll practice more and more, and then you'll become really good eventually, and maybe one day you'll be at the Olympics."

So that was that. She was going to go in, fall, get up, and in 10 to 12 years, a pink-eyed Bob Costas would interview me. Maybe I'd tell him about the day she started, when she thought she was going to skate at the 'lympics, and we'd laugh and laugh. But I wouldn't sit too close to him, because who knows where that eye has been.

At 6:15, the lesson started. My girl had her gloves, her skates and her helmet on. She was going for gold!

Now I didn't know what to do. There's this cliché that says Mom comforts a crying child who's fallen off his bike while Dad puts him back on the bike. It's some nonsense that has more to do with outdated stereotypes than with reality, and that only serves to make us feel insecure about our actions as parents. But it affected me, and I was torn. On the one hand, I could convince her to try again, tell her to overcome her tears, and push her back into the ice. On the other hand, she was holding on to me so tightly, putting her trust in me after falling again and again on a frozen, slippery floor, and she was finally feeling safe again -- there was no way I was going to let her go. Sure, I second-guessed myself, but when a child hugs you that tightly, you let her hug you.

But what about her 'lympics dream? I felt I did the right thing, but still... I wish life could be more like a video game, or a Choose Your Own Adventure book, where you can always go back and make a different decision.

I called my wife and told her what happened. In 12 or 16 years, she said, when our daughter wins the gold medal, we'll remember the first time she went ice skating, and how scared she was, and how we almost gave up, before we decided to try again, and now look at her, a champion!

But I couldn't help feeling depressed about it. I couldn't help second-guessing myself. In a parallel universe, a dad who looked just like me saw his almost-4-year-old girl crying hysterically on her first ice skating lesson, and when she wanted to leave, he told her she had to stay and finish the lesson. That girl cried more, and she fell more, and she had a miserable time for 30 minutes, but then, after a while, and after her 100th fall, she didn't care as much about falling. She didn't notice how cold the ice was anymore. She got up by herself, and she looked at her dad, and she gave him the thumbs up. Maybe she fell once more, only now, she laughed about it.

Back in this universe, I was alone in the kitchen, thinking and rethinking, listening to music from my phone on speakers.

I often laugh about how some songs make every mundane activity seem meaningful. Think about the theme song from Friday Night Lights, or the music from Game of Thrones. Or "Jupiter" by Holst. Or that bit from "Carmina Burana" (you know, the one that plays whenever something evil is happening in a movie). But nothing gives mundane moments spiritual meaning like Sigur Rós' "Hoppípolla." And of course, the song I make fun of all the time because of the way people who listen to it take whatever meaning they need from it, got me this time.

While the song was playing, I could see it, just as vividly as I now see the computer screen: I could see my 20-year-old daughter skating. I could see her spinning and jumping, and smiling the whole way through her routine. And as I saw her there, a mature, confident woman flying fearlessly through the air, I knew we'd try again. Whether I did the right thing or not didn't matter. We were going to try again. We were going to make this happen. 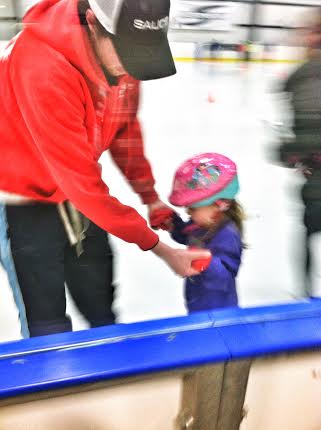 More:
Parenting parents-dadsice skatingParentsfatherhood
Newsletter Sign Up
Raise the kind of person you'd like to know
Subscribe to our parenting newsletter.
Successfully Subscribed!
Realness delivered to your inbox