"There should be a separate line to scrutinize anybody with the name Abdul or Ahmed or Mohammed." -- Mike Gallagher

My middle daughter's name seems to be on the No Fly List. Since she's only twelve years old, and neither practices nor endorses acts of political violence, I can only assume there's been some kind of mistake.

No one at the airport will tell us how she made the list. They won't even confirm that she's on it. Every time we go to the airport, the electronic kiosk simply refuses to issue her a boarding pass, and we're sent to the ticket counter, where five people look at the whole family's I.D., and then specifically hers, and then someone calls someone, and they call someone, and that person tells the person on the phone, "No, she's a little girl." And eventually we're allowed to run for our flight.

Which beats explosive decompression, I guess. But it's still a drag.

It also kind of feels like a waste of our time, the airline's time, the TSA's time, and the time of whoever's on the other end of the phone, who could be torturing someone.

So I should hate the No Fly List. Besides the personal inconvenience, it runs counter to a solid third of the Bill of Rights. But I'm conflicted. Because I have a pretty good idea why my daughter's on the list. It's because she has the same name as this guy: 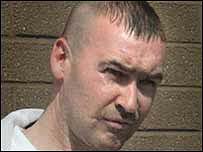 In 1993 this IRA thug walked into a fish shop in Belfast with a bomb that went off prematurely (of course) injuring 57 people, including a 79-year-old woman and two two-year-old boys. It also killed ten people, including a thirteen-year-old girl named Leanne Baird, and her little sister, Michelle, seven. Just like Jesus would have wanted.

But I have some disappointing news for Mike Gallagher: The killer's name isn't Abdul or Ahmed or Mohammed. It's Sean Kelly.

Which is why America has to wake up, get serious about terrorism, and racially profile all Irish Catholics. Because you never know where they'll strike next with their religion of hate. Wait, that can't be right.

The existence of terrorists with Irish names is something you'd think a man named Gallagher could understand. Except Mike Gallagher's real name is Michael Smelstor.

Which opens up a whole world of provocative questions:

- What kind of tragicomic liar social climbs by pretending to be Irish?

- Where do you get a name like Smelstor? From fighting He-Man?

- Wouldn't you rather listen to a talk radio host named Smelstor than Gallagher?

- "I'm Smelstor" is an anagram for "slime storm." Wouldn't that be a cool name for a radio show? "Welcome listeners. I'm Smelstor... AND THIS IS THE SLIME STORM!"

Mike Smelstor has an excuse for being ignorant. He barely finished high school. What really got me down this week was hearing equally vicious ideas from people who should know better, like the Hoover Institution's Tunku Varadarajan.

His "modest proposal" for improving air travel in a Post-Underpants Bomber era?

Recalibrate our bandwidth of stoicism.

Instead of denying my 10-year-old boy the right to take a pee when his destination is a whole hour away, why can't we be radically more careful about those we let on board our planes? Abdulmutallab's name was not on the terrorist "no-fly" list, which has fewer than 4,000 names in total. It was, however, on a larger database of some 550,000 individuals, called TIDE (Terrorist Identities Datamart Environment)... Why is anyone on this list allowed to board a plane to the United States? Why not convert TIDE into a "no-fly" list?

I know that sounds cruel and hysterical, stripping half a million people of due process so that Tunku Varadarajan's son can take a whiz, but that's because you lack stoicism.

Not traditional stoicism, of course -- that would involve accepting personal discomfort -- but stoicism in the Hoover Institution sense of the word: Accepting the pain of others to make your life better. Varadarajan Stoicism. As in "complete indifference."

Under Professor Varadarajan's plan my daughter could never see her grandmother again, unless she crossed America by foot. But she isn't Varadarajan's daughter. So her problem leaves him stoic.

Sean Kelly isn't a murderer. (His target wasn't the fish shop; it was a Protestant militia he believed was meeting upstairs; they weren't, of course.) The little girls just happened to be there. So he recalibrated the bandwidth of his stoicism to kill them.

If we let fear and cruelty drive us we're going to have to be stoic about the shitty world we end up in.